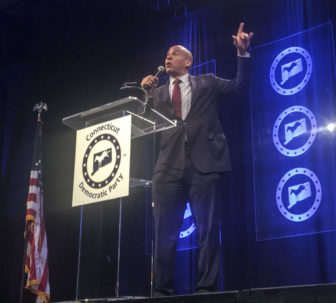 But he didn’t pull his punches in the few moments he did devote to Trump in his 30-minute keynote address at the Connecticut Democratic Progress Dinner, known in past years as the Jefferson Jackson Bailey Dinner.

The lines Booker reserved for the president were among his most forceful, and drew raucous applause from the 1,100 Democratic loyalists who paid as much as $2,500 a plate to be in the ballroom.

The Democrats, who came from across Connecticut, may well have witnessed a preview of what is to come in the 2020 general election.

Booker would be considered a top-tier contender in the Democratic field should he decide to run. U.S. Sen. Chris Murphy, D-Conn., said as much in his speech introducing Booker, a former mayor of Newark, N.J., who, much like Trump, is known for spending a lot of time on Twitter.

In a handful of moments during his remarks, Booker joined some of Connecticut’s most prominent Democrats in deriding Trump and his administration. He called Trump “a man in the White House who does not belong there.”

While those moments were well received, throughout the speech Booker kept his focus sharply on the policies he believes in and the narrative he has to support them. He addressed at length criminal justice reform and gun violence – two issues that have received significant attention from Connecticut’s state and federal lawmakers. 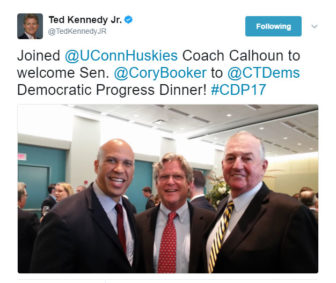 Booker said he made a stop at the federal correctional facility in Danbury on his way to Hartford, part of ongoing effort to see firsthand the challenges with a federal criminal justice system that continues to lead to increasing incarceration rates.

The discussion of criminal justice reform prompted Gov. Dannel P. Malloy later in the evening to tout the state’s progress. He was quick to point to the General Assembly’s bipartisan vote this session in favor of a compromise bail reform package that he crafted.

At the heart of Booker’s message was a belief in the importance of love in a divided country and an exhortation for Democrats to “stay faithful” to their platform because, he said, they “stand with the majority” of Americans.

Booker said he often looks to the words in the Declaration of Independence in which the nation’s founders pledged “our lives, our fortunes and our sacred honor” to each other.

“I am sick and tired of turning on my TV and watching a president of the United States evidence everything but honor,” Booker said.

Booker has made it a point to keep his message positive and patriotic in the face of an increasingly polarized political environment. Murphy said Booker’s message is one of “joyful opposition.”

And Murphy knows the message well, as he and U.S. Sen. Richard Blumenthal, D-Conn., are two of Booker’s closest friends and allies in Washington, D.C. Booker said there is nothing he wouldn’t do for the two of them.

He offered praise for both Murphy and Blumenthal, who he said are at the forefront of the resistance movement against Trump. He singled out Blumenthal as one of the “chief people” who is orchestrating the strategy that is “keeping Donald Trump awake at night.”

But while much of the focus from Connecticut’s state officials was squarely on Trump, Hartford Mayor Luke Bronin urged the party to consider a broader message.