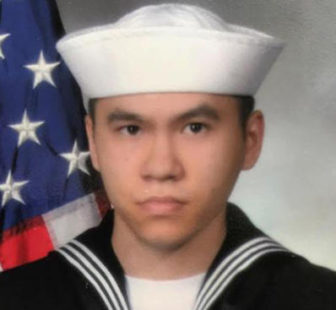 Gov. Dannel P. Malloy said Sunday night he is directing state and U.S. flags in Connecticut to fly at half-staff in honor of Ngoc T. Truong Huynh of Watertown, a U.S. Navy sonar technician killed in the collision between the U.S.S. Fitzgerald and a container ship in Japan.

The 25-year-old from the Oakville section of Watertown was one of seven sailors killed.

“Our state and our nation are in mourning for all of those who lost loved ones onboard the U.S.S. Fitzgerald, including Sonar Technician 3rd Class Ngoc T. Truong Huynh from Connecticut,” Malloy said. “We pray for a safe homecoming for all of our troops who are stationed around the world, and thank them for their bravery and service.”

“This is devastating news for the families and friends of the seven sailors we lost, for Connecticut, and the nation,” Lt. Governor Nancy Wyman said. “Today’s tragedy reminds us in the starkest terms what an enormous sacrifice our military men and women and their families make in service to our nation.”