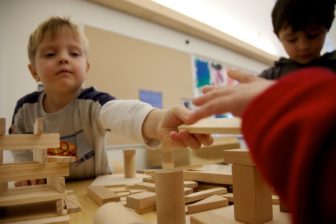 It’s an issue that has long puzzled policymakers: Why do some early childhood programs produce big benefits for students, but others don’t?

The answer may be linked to what happens after kids leave the programs altogether and move through school.

That’s the conclusion of a working paper released Monday. Economists Kirabo Jackson of Northwestern and Rucker Johnson of Berkeley find that students benefit from both well-funded schools and access to early childhood education — and that Head Start had greater long-run benefits for students whose K-12 schools were better resourced.

In other words, the whole of those two policies in tandem is greater than the sum of their parts.

“The findings suggest that early investments in the skills of disadvantaged children that are followed by sustained educational investments over time can effectively break the cycle of poverty,” the researchers write.

With the latest analysis, Jackson and Johnson build on previous work (coauthored with Claudia Persico) that found that court-ordered increases in school spending meant students were more likely to attend college and make more money as adults.

The duo used the same national data to connect school spending to the rollout of Head Start, a federally funded preschool program for poor children. The key question was whether additional funding is a complement or replacement for the program — that is, does more money for K-12 schools make Head Start more effective or less necessary?

The results point to the former.

On average, access to Head Start improve low-income students’ income as adults by 1.9 percent, and decreased their likelihood of incarceration by .75 percentage points. But the effect of Head Start multiplies when students later attend relatively well funded schools: in that case, adult earnings increased 5.6 percent and risk of incarceration dropped 2.2 percentage points. This was on top of the benefits seen from additional spending itself.

On the other hand, for students attending elementary and secondary schools with below average funding, the benefits of Head Start were negligible.

A limitation of the study, released through the National Bureau of Economic Research, is that it is not a randomized experiment and so it’s impossible to say definitively that it isolates cause and effect. The researchers compared students with access to Head Start, court-ordered school spending increases, or both to similar groups of students from the same area before these initiatives were put in place.

Another drawback of the study is that it relies on fairly old data: it examines students who entered Head Start between 1965 and 1980. That’s the tradeoff to using longer-run outcomes, said Jackson.

“Any time you do analysis with historical data, that is going to be the rub,” he said. “If you use recent data you have to analyze test scores or something of the like, and then we don’t know how that translates into long-run outcomes.”

The results point to a number of potential lessons for policymakers. Chief among them: A child’s education can’t be neatly divided into early childhood and later schooling.

“In order to sustain the benefits of these early childhood interventions, you have to keep spending to keep it going,” Jackson said. “Taking a more holistic view, as education being part of a system, rather than early childhood and K-12, [they’re] really both part of an interconnected system.”

The study is particularly relevant to the ongoing debate on the value of pre-K.

Multiple other analyses have shown that access to Head Start translates to long-run gains for students. But much of the attention to the program has focused on the fact that test scores gains often “fade out” as students move through elementary school.

Significant debate has ensued after research in Tennessee showed that students who participated in the state’s pre-K program saw the effects dissipate by first grade and even turn negative compared to students who didn’t participate in the program.

Jackson has a hypothesis for results like those: insufficient spending on students’ K–12 schools.

“The least encouraging [preschool] evaluation was in Tennessee,” he said. “Tennessee it turns out is one of the most poorly funded K–12 states in the country. We don’t have any proof that this might explain it, but if you just looked at our data it tells us that that’s exactly the kind of situation where we might expect [preschool] to be the least effective.”