1,200 youths will lose their summer job unless legislature acts

Between 1,200 and 1,500 young adults in Connecticut will be out of a job this summer if the legislature is unable to approve a budget, or a proposed mini-budget, by Friday.

The Summer Youth Employment program employs high school students throughout the state who are between 14 and 21 and qualify for free or reduced-price school lunches. The students work about 20 hours per week for minimum wage in a range of public- and private-sector jobs.

“In the last budget alternative we were informed of, the program was given zero dollars, essentially ending it. Budget or no budget, that is where it is right now.” said Bill Villano, CEO of Workforce Alliance for South Central Connecticut, which runs the program in that area. “

If no budget is passed by July 1, the executive order under which Gov. Dannel P. Malloy run the state, would provide no funding for the Summer Youth Employment Program, said Malloy spokesman Chris McClure. In the stopgap mini-budget the governor proposed, $3.5 million was allocated for summer youth programs. 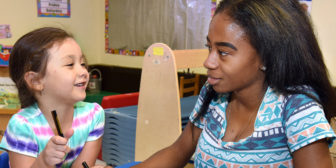 A youth counselor employed under the Summer Youth Employment Program

Five development boards administer the program throughout the state and would be forced to operate only with alternative funding, such as grants from the cities, towns or non-profits. Only two said they would be able to continue the program this summer in any capacity — Capitol Workforce Partners, which serves the Hartford area and receives $1 million from the city as well as a grant from the Hartford Foundation for Public Giving; and the Eastern Connecticut Workforce Investment Board, which serves 41 towns and receives several grants from local foundations.

Last year, the Summer Youth Employment program statewide received $5.2 million from the state and was able to support between 2,500 to 3,000 summer jobs. This year, in the governor’s initial budget proposal the program was cut in half to $2.5 million, according to Villano, so a signifiant reduction in participants already had been anticipated. In the New Haven area, the state-funded jobs would have been reduced from 880 to 400.

The program gives many young people the opportunity to begin working in a good environment and receive career development services to help them plan their post-secondary education, Boucher said.

“Learning these competencies, having an adult mentor, further integrating their school experiences with their real work experience, are critical to future success,” Boucher said.

Virginia Sampietro, the senior director of employment development at the Eastern Workforce Investment Board,  said that without state funding, her agency will be able to  provide just one-third of the usual number of jobs.

“It is really important to the youth, but also important to the communities that we serve,” Sampietro said. “So many of the recreation programs that serve younger kids count on the workers that we provide to be able to run those programs.”

Many of the teens in Eastern Connecticut also do gardening work, Sampietro said. The produce from the gardens provides food to several local soup kitchens.

This program was funded by the federal government up until 2000. After a gap of a few years, the state restarted the program, providing about $5 million each year.

“There was a gap before and only a few major cities that kept some type of summer program going with contributions and sponsorships during that time,” Villano said. “If money was available in the (2019) budget we could start up again.”

“We have an anemic or negative population growth, we have an out-migration from a lot of our young who go to school in other places and don’t come back,” Villano said. “Programs like this are necessary to prepare a workforce to take the jobs that companies like Pratt & Whitney and Sikorsky will be needing to fill.”