At CT’s beaches and parks, normalcy amid state budget mess 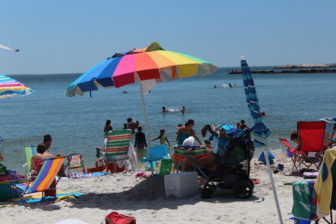 Hammonasset Beach State Park in Madison reached parking capacity Tuesday at 11:50 a.m. – a little early, perhaps, but not unusual for one of the most popular beaches in Connecticut on the Fourth of July.

In fact, 19 state parks and beaches filled their parking lots to capacity on Independence Day, more than on any other day “in recent memory,” said Dennis Schain, a spokesman for the state Department of Energy and Environmental Protection.

But who wouldn’t have expected thousands of people to show up on a sunny holiday with temperatures in the high 70s and low 80s? The question was whether the parks would be open.

Eleven states – including Connecticut – entered the new fiscal year that began July 1 without a budget, and one – New Jersey – closed its state parks as a result.

Amid the state’s ongoing budget mess, Gov. Dannel P. Malloy decided last week to continue funding the Department of Energy and Environmental Protection at the level it says it needs to keep the parks open through the end of its summer season.

The parks funding was one component of an executive order Malloy signed Friday that allocates state funds in the absence of a budget. The state is facing a $5.1 billion deficit over the next two years. Lawmakers remain at odds about how to close it.

In similar situations, closing state parks has been used as a political tactic in Connecticut and elsewhere to put public pressure on lawmakers to reach a budget deal.

New Jersey’s action garnered national attention this week. Gov. Chris Christie, who decided to close the state parks, drew criticism for using one of the closed beaches over the holiday weekend after making the decision.

New Jersey lawmakers reached a budget deal late Monday night, allowing the parks and beaches to reopen in time for July 4th, however.

In 1991, Gov. Lowell P. Weicker closed state parks, putting pressure on lawmakers to adopt his budget proposal – which included enactment of a state income tax. It took six weeks without a budget before lawmakers adopted the controversial proposal.

Closing parks may be a tool, Schain said, but it has political and budgetary consequences.

“You incur the Chris Christie syndrome when you close the parks,” Schain said. “And you lose the revenue.” That revenue, which comes from parking and camping fees, amounts to about $6 million annually, Schain said.

That is why Malloy opted not to close them.

“When looking at the state parks, you need to understand that the fees collected pay for the seasonal costs,” Malloy said last Friday. “So to close them would not save any money. In fact, it would probably cost us money.”

Schain said funding under the executive order should keep the parks open through the end of the summer season, which began Memorial Day weekend and ends Labor Day weekend.

Still, the state took some cost-saving measures to keep its 110 parks and 32 forests open after last year’s round of state budget cuts.

The state has closed four campgrounds since the cuts took effect last July. It also decided this year to eliminate camping during the fall season – from Labor Day to as late as Columbus Day – after reducing it to two locations last year.

Eight of the state’s most popular public beaches still have lifeguards, but they are only on duty from Thursday to Sunday this year.

For the July 4th holiday, however, the state made an exception to accommodate the expected influx and had lifeguards on duty Monday and Tuesday.