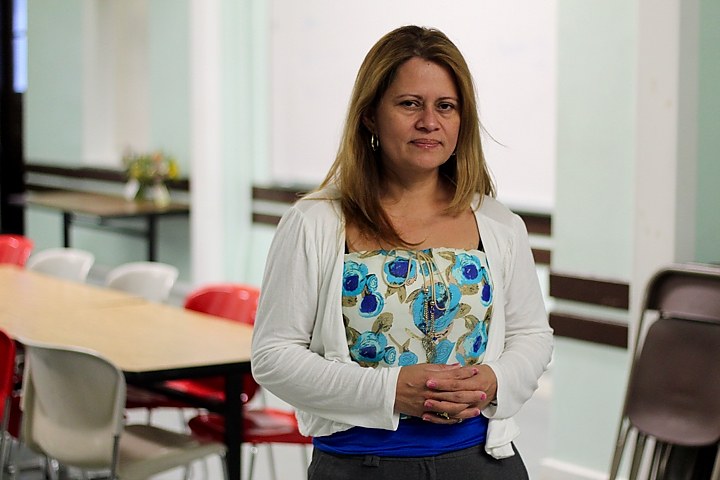 Nury Chavarria’s decision to hole up in a Fair Haven church to evade deportation wasn’t the first time that she has fled her home to seek sanctuary.

In 1993, near the end of a three-decade civil war, government soldiers ransacked her village in El Petén, Guatemala’s northernmost region, forcing her to vacate her house and sleep overnight in a school. Shortly after, she flew to America, seeking a respite from her country’s violence and poverty.

Now, Chavarria has uprooted her life a second time. Disobeying an order from U.S. Immigration and Customs Enforcement (ICE), she skipped a flight back to Guatemala and took up residence last Thursday in a back room of Iglesia de Dios Pentecostal, a 146-year-old church and “sanctuary” house of worship, where federal government policy forbids immigration agents from entering to arrest and deport her.

This time around, though, Chavarria has chosen to speak out, decrying President Donald Trump’s immigration crackdown as senseless and inhumane. In an interview with the Independent on Monday afternoon in her temporary quarters   —  between a hundreds-strong rally the night before and a packed day of television interviews ahead — Chavarria’s eyes were already darkened with exhaustion. But the mother of four said she has found an inner strength she didn’t know she possessed.

Originally worried about negative attention from going public with her story, Chavarria has now embraced her role as a figure in a national debate.

“It’s good that people know [my situation]. It’s important for us, for everybody; not only for me,” she said. “There are a lot of Spanish-speaking people who came here for work. We clean houses, we do landscaping: all the heavy work.” Chavarria said she is going public for them.

“I did this because I want to help more families” facing deportation who “do not have all the support that I have,” she said.

Chavarria’s days have been filled with a parade of visitors: two U.S. senators and a congresswoman, the governor, two mayors, newspaper reporters and television broadcasters, advocates and family members. Churchgoers drop off fruit and hot meals; one member of the congregation hasn’t left her side for four nights, arranging chairs into a makeshift bed.

Hayley, Chavarria’s precocious 9-year-old daughter, often runs out from behind her room divider to see who’s the next guest to appear. (The grade-schooler noted that the journalists all ask the same questions.) Chavarria’s other three children, all American citizens born in Connecticut, are staying at the family’s apartment in Norwalk with their dog, two cats and bird. The kids are being watched by their aunt and grandfather, both of whom have legal status to stay in the country. Her 15-year-old son calls regularly, but he doesn’t want to visit Chavarria in the church, afraid of the cameras. 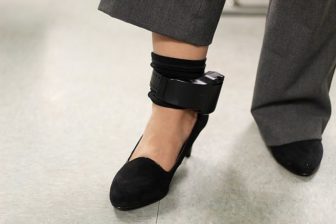 Brushing off questions about whether she feels cooped up inside the sanctuary, Chavarria said she feels “comfortable.” She said she hopes her case wraps up in a couple of months, tops.

What if her case takes longer? “I’ll be here,” she answered.

If the federal government’s statements are any indication, Chavarria could be there for a while. Immigration authorities know exactly where she is, monitoring her location through an ankle bracelet she keeps charged. ICE’s guidelines direct agents not to conduct enforcement activity at “sensitive locations,” such as houses of worship, schools and hospitals. That means Chavarria is probably off-limits, unless a supervisor signs off on a raid.

It doesn’t mean, however, the agency is standing down. In a statement, the agency labeled her “an ICE fugitive” because she missed her scheduled departure.

“Her current status as an ICE fugitive will not change,” Shawn Neudauer, a public affairs officer, wrote in an email. “Her case has received extensive reviews and she was granted a benefit by being allowed to leave on her own, rather than be arrested and formally deported by ICE.”

Should I stay or should I go?

One could sum up Chavarria’s life as a series of decisions about whether to stay or go, first from El Petén in 1993 and then from Connecticut in 1999 and 2017.

Now 43 years old, Chavarria landed in Stamford 24 years ago, seeking better employment prospects. On arrival, she requested asylum, but her case was rejected. (Her brother’s and father’s asylum applications were granted, and they received green cards; her sister later applied for and got full citizenship.) Still, Chavarria got a temporary work permit, and for 15 years, she cleaned houses.

In 1998, after the visa expired, a federal immigration judge allowed her to voluntarily depart. According to ICE, Chavarria failed to comply the following year, which left her open to a “final order of removal,” or more bluntly, deportation.

On Monday, the Independent asked Chavarria if she considers originally defying that order was breaking the law. At the time, her oldest son, then a 4-year-old with cerebral palsy, was learning to walk for the first time after intensive therapy with leg braces, and her oldest daughter, then a 4-month-old infant, had just beaten a case of bronchitis that kept her in the hospital with a tube down her throat but was now living with asthma.

“I decided not to go because I don’t have insurance in my country that could cover their needs,” she said. “But I’m not doing anything bad.”

After a long silence, she added, “Probably I broke the law, but I have a good reason to be staying here.”

Paranoia consumed her, jolting her with constant worries that ICE could snatch her up at any moment. But by 2008, she’d forgotten about the order and got a job at Whole Foods.

Shortly after Barack Obama’s election, ICE cracked down on her again. But in 2010, right around the time Obama’s administration instructed ICE to focus on deporting criminals, the agency deferred Chavarria’s removal for one year “on humanitarian grounds,” ICE’s spokesman said.

Normalcy returned, and Chavarria became a field manager for a housekeeping company, training several maids how to use the right cleaning chemicals at houses they scrubbed in Norwalk, Bridgeport, Westport and even New York City.

Last November, though, as they watched the election returns, Hayley said, “Oh my god, Trump is going to send you back to Guatemala.” Chavarria reassured her daughter that she had a work permit. But that document expired in February. On June 21, at her annual check-in with ICE, agents told Chavarria to be out of the country within four weeks.

Last Wednesday, the night before her flight was set to depart from Newark airport, Chavarria awoke at 3 a.m. and sobbed. Still unable to stop crying, she took the dog for a walk, then came in and watched her children sleep. At that moment, dreading that she might never see them again, Chavarria realized she couldn’t go back to Guatemala. As the sun rose, she packed her bags. 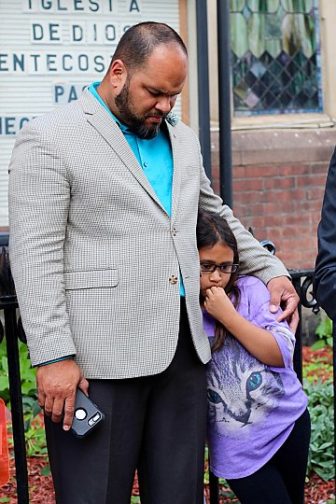 Pastor Otero comforts Chavarria’s daughter, Hayley, shortly after they moved in to the sanctuary.

ICE gave her a final phone call eight hours before her flight. Chavarria had tried to appeal by saying that her disabled son can’t live by himself. “He can’t tie his shoes. Doing a button is going to be hard for him. He can’t cook,” she said. “He needs extra help, but all my kids need me.” ICE believed he could live independently, and reiterated the denial of her stay.

In the early afternoon, with the clock ticking, Chavarria headed to Iglesia de Dios, where Pastor Hector Otero had been preparing to host undocumented immigrants since April. Her oldest daughter protested, saying it was better to avoid an arrest. She eventually changed her mind and agreed with her mom’s decision.

Chavarria has since had a full slate of interviews lined up — an initially uncomfortable task that she’s eased into.

“A few days ago, if you told me that this was going to happen to me, I would say no,” Chavarria said. “I believe I am natural. I try to talk the best I can. I keep fighting for my kids. All the things that I do, that’s for my family, for my kids. I don’t think of me.”

Chavarria and Hayley sometimes watch the videos on her iPhone, and Chavarria thinks, “I can’t believe that’s me.”

“Before, when they put the ankle bracelet on me, I was hiding. I’d use pants, and in the hot weather, I’d use long dresses. But right now, I’m free. Yes, I’m in charge. Now, I’m here, I’m still here.”

In one of the soundbites she gave to the Independent, Chavarria delivered a message to Trump: “I’d tell him to have more compassion. We are not criminals; we are hardworking and we support our families. I want to stay with my kids. In my country [Guatemala], it’s not the same opportunities they have here. They are citizens, like him, like anyone.”

Chavarria said she’s been stunned by the number of people she’s met who are advocating for immigrants’ rights. She’s particularly impressed by those outside the Hispanic community, like the group CT Shoreline Indivisible. “They are mothers too,” she observed. If she’s allowed to leave the church, she said, she wants to continue to be involved in the immigration reform movement.

But her primary concern, Chavarria said, is getting back home. “I would like to go back to my house, start working, start doing my normal things that I did for 24 years,” she said, adding, “I miss my kids.”

He spent 30 years in prison in CT for murder. Soon, he could be released.

Now there is a path to freedom for Michael Cox, who spent 30 years in prison for murder and assault.

The case moves now to a jury to decide what damages Jones owes the families.

Landlords wanted: As Afghan refugees arrive in CT, housing is an issue

As Connecticut prepares for an influx of refugees from Afghanistan, affordable housing has become a challenge.

Parole board votes to give 11 prisoners commutation hearings

Many given a hearing have been in prison for longer than they were alive at the time of their crimes.