Immigrant mom who took refuge in a church can go home 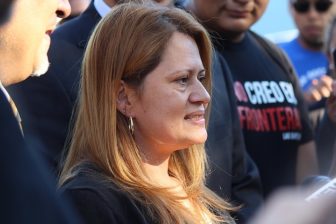 Hundreds of immigrant rights activists took to the streets of Fair Haven to celebrate — rather than protest as planned — after a 43-year-old woman taking sanctuary in a neighborhood church won a stay allowing her to remain in the country.

The news meant that Nury Chavarria could leave Iglesia de Dios Pentecostal, where she took up residence last week. Last Thursday she disobeyed an order from U.S. Immigration and Customs Enforcement (ICE) and skipped a flight back to Guatemala, occupying with her 9-year-old daughter a back room of the “sanctuary” house of worship. (Federal policy forbids immigration agents from entering church grounds to make arrests.) Now Chavarria can return home to Norwalk to work and take care of her four children.

The news hit New Haven late Thursday afternoon as a rally on her behalf was beginning outside the church. The more than 300 people present took a victory lap that Kica Matos of Fair Haven, an organizer focused on immigration and race at the Center for Community Change, told the crowd would be loud and celebratory instead of the planned silent march.

Rabbi Herbert Brockman of Congregation Mishkan Israel sounded a shofar, a musical instrument made of a ram’s horn, to mark the victory for Chavarria and kick off the march around the block.

“I am very emotional, grateful to God,” Chavarria, surrounded by church leaders and attorneys on East Pearl Street, said through an English translator to the gathered supporters. “Now I can cry, but not as I did on the 20th when I was shedding tears because I had to leave. God has been my attorney.”

Chavarria’s attorneys won the stay at around 2 p.m. in U.S. Immigration Court in Hartford. Immigration and Customs Enforcement (ICE) then agreed not to seek custody of her. So she’ll be free to go home.

At 5:30, Chavarria and her attorneys and supporters came out to greet the rally and announce the news.

One of her attorneys, Marisol Orihuela, described how her team filed two motions: an emergency motion for a stay of deportation and a motion to reopen her case based on new evidence.

“He story was so compelling that only one hour after filing, immigration granted her motion for a stay,” said Orihuela, a Yale Law School clinical associate professor affiliated with the school’s Worker and Immigrant Rights Advocacy Clinic.

Mayor Toni Harp also addressed the gathering. She said the city will continue to stand with Chavarria. “Oftentimes there are people who question the value of having Yale in our community,” Harp said. “But I cannot tell you how grateful I am for Yale’s immigration clinic.” 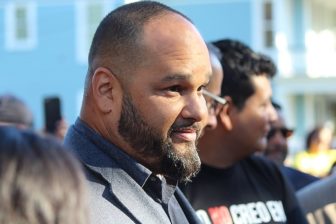 Pastor Hector Ortero said he was sad to see Chavarria head home, but happy for her victory.

“ICE, the rest of those who mess with our neighbors, know better than to come to New Haven,” Harp added.

Elected officials who had taken up her cause — including Gov. Dannel P. Malloy, U.S. Sens. Chris Murphy and Richard Blumenthal, and U.S. Rep. Rosa DeLauro — issued statements commending the decision by a judge and Immigration and Customs Enforcement (ICE) to grant Chavarria the stay. The senators vowed to continue working to win Chavarria, who has never encountered trouble with the law in her 24 years in this country, permanent permission to stay here.  She has raised her children as a single mother and worked for a housecleaning company.

“Today, reason and compassion have prevailed.  There was never a rational justification for Nury Chavarria to have been threatened with deportation and separated from her children,” Malloy’s statement read in part. “Members of the community had their voices heard.”

Chavarria was one of 13 undocumented immigrants taking sanctuary in U.S. houses of worship. She was the first to do so in New Haven. Her case became national news, and she warmed up to the role of spokesperson for a movement.

“I’m glad ICE finally listened to our calls for justice for Nury, and I’m grateful for all the community support she received,” Murphy was quoted as saying in a release issued by his office. “But this is just a temporary victory, and only when President Trump’s mean-spirited policy of tearing apart parents from their young children ends will meaningful justice be achieved.”

Iglesia de Dios Pentecostal Pastor Hector Ortero said he was sad to see Chavarria head home to Norwalk Thursday, but happy for her victory. He reminded the crowd that the language of heaven is not English, Spanish or French.

“The language of heaven is faith,” he said. “We still believe. I pray that God bless Nury and her lovely family, that God bless everyone, and God bless the United States of America.” 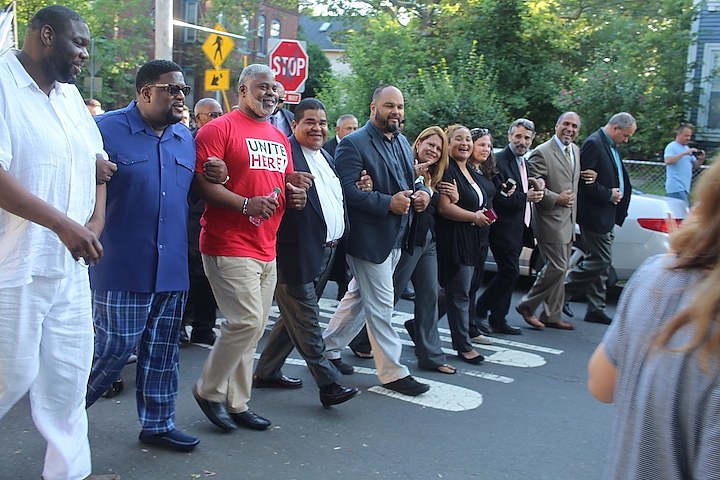