Blumenthal: North Korea strike near Guam would put military action on the table 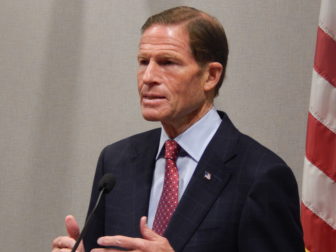 U.S. Sen. Richard Blumenthal, D-Conn., said Thursday the United States should consider military action if North Korea follows through on a threat to fire missiles in the direction of Guam.

On Wednesday, amid an escalating war of words between Washington and Pyongyang, North Korea announced through its state-run news agency, KCNA, that it was making final preparations to launch four missiles at targets roughly 20 miles away from Guam in the coming days.

The announcement comes on the heels of a Washington Post report Tuesday that says U.S. intelligence officials have determined North Korea now is capable of placing nuclear warheads on its intercontinental ballistic missiles.

“Military action would have to be considered in response to an attack,” Blumenthal said in Hartford Thursday. “I’m not going to predict what that action should be, but every step should be used to convince the North Koreans that they face devastation and destruction.”

Even if North Korea does not take action, Blumenthal said, the United States must pursue additional economic sanctions against the nation while working to resume negotiations.

Blumenthal said “mixed messages” from the White House have led to the ongoing escalation.

That escalation began Tuesday when President Donald J. Trump raised the specter of a nuclear strike on North Korea if the country made further threats against the U.S., saying they would lead to “fire and fury like the world has never seen.”

“Sound dialogue is not possible with such a guy bereft of reason and only absolute force can work on him,” General Kim Rak Gyom, head of North Korea’s rocket command, said in Wednesday’s KCNA report.

He said economic sanctions against North Korea must be “deepened and tightened” to force them to the negotiating table, which he said proved successful with Iran.

Allowing North Korea to remain a nuclear power is not an option, he added.

“Our policy has been – and I support it – that we will not tolerate a nuclear-armed North Korea with the capacity to fire, successfully, missiles at the United States mainland,” Blumenthal said.