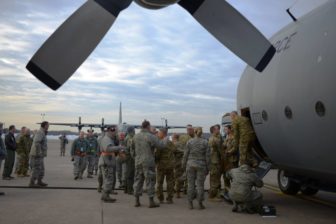 The 103rd Airlift Wing, known as the “Flying Yankees,” as it departed for southwest Asia to assist with U.S. military operations in February 2017.

A small contingent of the Connecticut Air National Guard was deployed Monday to provide assistance in Texas as Tropical Storm Harvey slowly moved up the coastline, bringing with it devastating rainfall.

The 103rd Airlift Wing, known as “the Flying Yankees,” has sent eight airmen and a C-130 Hercules cargo plane to help in supply efforts, the governor’s office said.

At least nine people have been killed so far in the storm. Texas officials anticipate the number will rise.

Harvey first made landfall as a Category 4 hurricane Friday night near Corpus Christi, Texas – moving inland toward San Antonio before changing course and heading back into the Gulf of Mexico. The National Weather Service expects Harvey to make a second landfall northeast of Houston on Wednesday.

“We know what it’s like to experience extreme weather events, and we know how vital it is for local and state governments to work together and provide assistance during times of natural disasters or other emergencies,” Gov. Dannel P. Malloy said. “I thank our Connecticut Air National Guardsmen for taking on this mission to give Texas aid during this great time of need. The State of Connecticut stands ready to provide support in the ongoing response and recovery efforts.”

“Our thoughts and prayers are with all suffering from the effects of Hurricane Harvey,” Major General Thaddeus J. Martin, adjutant general and commander of the Connecticut National Guard, said. “Even on the heels of the unit’s first large-scale, overseas deployment, the 103rd Airlift Wing – and the entire Connecticut National Guard – stands ready to aid the men and women of this nation anytime, anywhere.”

Americares, a Stamford-based nonprofit, also is participating in the relief efforts. Donna Porstner, a spokeswoman for the organization, said it is delivering medicine and relief supplies, as well as “supporting health facilities serving low-income and uninsured patients.”

“We have a team on the ground in Texas performing needs assessments at clinics and emergency shelters and anticipate more shipments in the coming days,” Porstner said. “We have already delivered four truckloads of bottled water and a shipment of tetanus vaccines to protect first responders and residents cleaning up the damage.”

About 30 Connecticut volunteers with the Red Cross already are in Texas, officials say – and more are expected to join them in the coming days.