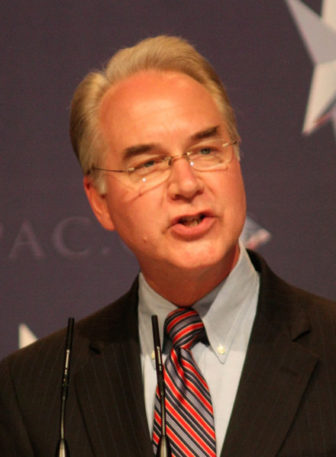 Health and Human Services Secretary Tom Price has resigned amid controversy over his use of private jets for official and personal business. He promised to pay back some of the $400,000 spent on those flights, but the offer came too late for the Trump White House.

In a statement released Friday afternoon, the White House said President Donald Trump intended to designate Don Wright of Virginia to serve as acting secretary, effective at midnight Friday. Wright served as the deputy assistant secretary for health at HHS and he directs the Office of Disease Prevention and Health Promotion.

Price’s four-paragraph resignation letter stated, in part: “I have spent forty years both as a doctor and public servant putting people first. I regret that the recent events have created a distraction from these important objectives.”

Price, an orthopedic surgeon and former House Budget Committee chairman, was surrounded by controversy since his nomination to the nation’s top health post in January. He made questionable stock trades in health care companies while a member of the tax-writing House Ways and Means Committee and interceded on behalf of donors with federal agencies. Democrats in the Senate fought his confirmation, charging that he was too ethically challenged to serve as HHS secretary.

This summer, Price was increasingly viewed by President Donald Trump as ineffective in helping to push a GOP plan to “repeal and replace” the Affordable Care Act through Congress.

Price had been under pressure since Sept. 19, when Politico broke the news that he had taken numerous official trips via private jet, costing tens of thousands of dollars more than commercial flights.

One of those trips involved a charter flight to Philadelphia, which can be reached by car from Washington in just over two hours. Subsequent reporting by Politico revealed that Price’s more than two dozen private plane trips cost in excess of $400,000, and that some of the trips included personal as well as official business.

He also traveled with his wife to such international destinations as Africa, Europe and Asia on military flights at a cost to taxpayers of more than $500,000 — bringing the total expense to taxpayers since May to more than a million dollars, according to Politico.

Price said last weekend he would stop using private planes pending an investigation by the HHS Inspector General, but he and his staff have repeatedly defended the trips as necessary to get him to events in a timely manner.

Pressed by reporters Wednesday about the spreading scandal, Trump said he was “not happy” about the private plane travel “and I let him know it.” Asked if he would fire Price, Trump responded, “We’ll see.”

On Thursday, Price released a statement saying he would “take no more private charter flights as Secretary of HHS. No exceptions.” Price, whose net worth has been estimated at $13.6 million, also said he would “write a personal check to the U.S. Treasury for the expenses of my travel on private charter planes.” He added that taxpayers would not “pay a dime for my seat on those planes.”

His offer for the domestic flights — about $52,000 — was a fraction of what taxpayers paid for his entourage.

House Speaker Paul Ryan, R-Wis., said Price was “a leader in the House and a superb health secretary. His vision and hard work were vital to the House’s success passing our health care legislation.”

Democrats had a different view.

In a statement, Sen. Ron Wyden (D-Ore.), the ranking member of the Senate Finance Committee, said Price has “repeatedly abused the public trust and betrayed the agency’s mission to improve Americans’ health care.” Wyden said he hopes this will mark “the beginning of a new chapter” for the Trump administration’s health care agenda and that Price’s replacement will “be focused on implementing the law as written by Congress.”

The new HHS secretary should keep “the president’s promise to bring down the high cost of prescription drugs,” Wyden said.

Wright, Price’s interim replacement, has worked for the federal government since at least 2003. A physician, he served in high-level positions at HHS under the George W. Bush, Obama and Trump administrations, according to his LinkedIn profile. At HHS, Wright oversaw many public health duties including development of the national dietary guidelines for Americans and the department’s health literacy agenda. He has also spearheaded efforts to reduce adverse drug interactions.

Wright represented the United States at the World Health Organization’s executive board and served on the National Cancer Institute Advisory Board.

According to the profile, he held management positions in the Office of the Surgeon General, National Vaccine Program Office, Office of HIV/AIDS Programs, Office of Minority Health, Office of Population Affairs, Office of Women’s Health and President’s Council on Physical Fitness and Sports.

From 2003 to 2007, Wright was director of Occupational Medicine at the Office of Safety and Health Administration.

Wright has a bachelor’s degree in zoology from Texas Tech University and holds a medical degree from the University of Texas-Galveston. He completed a residency in family medicine at Baylor University in Dallas and practiced for 17 years in Texas as a doctor. He also holds a master’s in public health from the Medical College of Wisconsin in Milwaukee, according to his LinkedIn profile.

Leah Binder, president of the Leapfrog Group, a patient advocacy organization, said she was hopeful about Wright’s new role.

“I am cautiously optimistic the appointment of Don Wright signals a resurgence of federal leadership on patient safety,” she said in an email. “Don Wright led development of the influential National Action Plan on Healthcare Acquired Infections in 2013. … His work galvanized infection prevention and led to significant improvements … that saved many lives. He has also been influential in the movement to measure the problem and tie Medicare payments to hospital safety.”

This story above first appeared Sept. 29. 2017, in Kaiser Health News (KHN), a national health policy news service. It is an editorially independent program of the Henry J. Kaiser Family Foundation.

Murphy: “Secretary Price was never the right choice for this job. His private jet use may have been what did him in, but his real offense was overseeing and directing President Trump’s sabotage of health care for millions of people. Insurers are raising premiums because this administration is intentionally undermining our health care system. Millions may go without care because the administration is neglecting their responsibility to promote and facilitate enrollment in the Affordable Care Act exchanges.

“President Trump’s first nine months have been one health care disaster after another. Back home, people in Connecticut tell me they can’t take anymore sabotage, repeal talk, and uncertainty. Let’s get a new HHS Secretary who’s finally devoted to improving health care, move past these debates and come to bipartisan agreement on how to stabilize markets and make health care cheaper. Let’s get it done.”

DeLauro: “President Trump campaigned on draining the swamp, yet it appears that many of his cabinet appointees have brought ‘the swamp’ closer.  President Trump should ask for the resignations of the remaining members of his administration whom have similarly abused government resources.  Secretary Mnunchin’s date at Fort Knox for the Total Solar Eclipse and Secretary Zinke’s trips to Montana and the Virgin Islands appear to be no different that Secretary Price’s abuses.”

“During his short tenure, Secretary Price wasted taxpayer dollars while undermining and sabotaging the Affordable Care Act.  His actions have driven up premiums and threatened the healthcare of millions of Americans.”