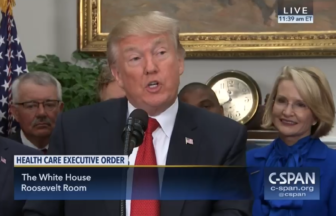 President Donald Trump discusses his executive order in the Roosevelt Room of the White House.

The Trump administration Thursday advanced a wide-ranging executive order aimed at expanding lower-cost insurance options, allowing employers to give workers money to buy their own coverage and slowing consolidation in the insurance and hospital industries.

Critics said that if implemented, the changes could result in more bare-bones coverage and pull healthier people out of the already struggling insurance markets, leading to higher premiums for those who remain in more-regulated coverage.

President Donald Trump’s action, which will not take effect in time to affect the upcoming open enrollment for coverage in 2018, signals a shift in the administration’s strategy, which relied on Congress to repeal the Affordable Care Act. Trump is now using the force of his executive rule-making authority to implement long-favored GOP policy alternatives.

“With Congress the way it is, I decided to take it upon myself,” Trump said in remarks at the White House earlier in the week. Senate Republicans failed within recent months to pass legislation to overhaul the ACA.

[Connecticut Democrats blasted the executive order as just another effort to undermine the Affordable Care Act.

“Sabotaging the Affordable Care Act will cause real harm to people, and it is infuriating that these assaults will not stop,” Gov. Dannel P. Malloy said.

Sen. Richard Blumenthal called the order “yet another flawed façade that promises more coverage while delivering far less. If the Administration is intent on improving health care, they owe the American people a concerted effort to repair our current system, instead of weakening it through continued disruption of the insurance marketplace.”

The executive order directs many agencies, including the Department of Labor, to consider proposing rules or new guidance to loosen current restrictions on what are called “association health plans” and on selling low-cost, short-term insurance.

Such rules could potentially exempt such plans from a number of the requirements of the Affordable Care Act.

This order will “help millions of Americans who have been harmed by Obamacare,” said Andrew P. Bremberg, director of the Domestic Policy Council, who briefed the press.

The directive also instructs agencies to consider new regulations or guidance to:

The pros and the cons

Associations are generally membership groups based on a profession or business. Proponents say allowing consumers to buy insurance through these organizations gives them more clout with insurers than they’d have buying their own plan on the individual market — and results in lower premiums.

But the real savings in premiums is likely to come because the policies could offer fewer benefits than more regulated ACA plans, and the associations would have more leeway to set premiums based on the health of the group.

Trump’s order is likely to please some groups, including the National Federation of Independent Business. This organization has long supported association health plans, which it says allow small businesses to buy coverage across state lines.

Not all small businesses back association health plans, though, or the idea that they need help banding together to buy coverage.

“The truth is, that’s how they get insurance today and it’s called the small group market. Every state has one,” said David Chase, spokesman for Small Business Majority, a group that supports the ACA.

“What association plans would do is actually pull people out of those small group pools and start a bunch of new pools. That doesn’t band people together,” he added.

Critics also warn that such plans, with pared-down coverage and lower premiums, could siphon off the healthiest consumers. Older, sicker people would be left to seek health insurance through more regulated plans available through state and federal insurance marketplaces. That could cause premiums to rise more rapidly for those groups.

The combination of allowing less-regulated association plans, making it easier for employers to send workers to buy their own coverage and making short-term plans more broadly available “is a concerted effort to undermine the individual market” by drawing out the healthiest consumers, said Kevin Lucia, a research professor at Georgetown’s Health Policy Institute.

Still, some employers now sitting on the sidelines might end up adding workers to that pool, countered Chris Condeluci, a Washington, D.C., attorney who previously worked for Sen. Chuck Grassley, R-Iowa, and served as counsel to the U.S. Senate Finance Committee during the drafting of the ACA.

“Some will want to give workers a chunk of change to make sure they get coverage, but not be in the game of sponsoring a (group) plan themselves,” said Condeluci.

Administration officials said Thursday that they had not studied the effect of the changes on the marketplace but might do so in the future.

Some consumer advocates also warn that association plans and short-term policies are generally less generous with benefits — and could leave some unwary consumers stuck with large medical bills. Such plans might not cover maternity care, for example, or prescription drugs.

Additionally, short-term plans can exclude paying for any preexisting medical conditions, either upfront or upon renewal, something the ACA bars for all other types of insurance.

Legal challenges to the executive order could result from these issues.

For one thing, policy experts question whether the Trump administration can allow associations broad leeway to sign up individuals, rather than following the Obama administration’s strict definition of “rare instances” in which an association would qualify as an employer offering group coverage.

Trump administration officials said that issue would be studied as part of the consideration around setting new rules, but that the law may allow self-employed individuals to join associations.

Associations want to be designated as a large group because a complex mix of laws cover employment-based insurance coverage, and rules can differ from those governing small-group or individual coverage.

Large-group plans need not cover all 10 of the ACA’s “essential health benefits,” which include things like hospitalization, drug coverage, maternity care and substance abuse treatment.

They would have to follow other rules, however, such as the ban on setting annual or lifetime limits and the rule allowing parents to keep their children on the policy until age 26.

But insurers could vary premiums for large groups based on medical claims history of the overall group, so younger, healthier groups would likely get lower premiums.

In the individual market, insurers cannot base a premium on a policyholder’s health.

Association health plans are not new. They’ve been around for decades, and Republicans have traditionally eyed them as a means to make it easier for small businesses and individuals to band together to buy insurance.

In the past, though, some had solvency problems and went bankrupt, leaving consumers on the hook with unpaid medical bills.

In several states, regulators investigated whether the plans were advertising that they had comprehensive coverage when, in fact, they provided little or no coverage for such things as chemotherapy or doctor office visits.

The ACA answered some of those concerns by setting minimum standards for coverage on most insurance policies, including association plans, which prevent them from skimping on such things as doctor visits or prescription drugs.

Their numbers fell after the sweeping law went into effect.

Advocates of the change have always argued that this limit simply meant people had to renew more often — and then face their deductibles all over again.

But how will association plans fare?

Joe Antos, at the conservative American Enterprise Institute, questions how popular such plans would be with both consumers and insurers.

“The people on the left who say this will doom the exchange marketplace are, as usual, exaggerating the likely effects of this,” said Antos.

That’s because many of the approximately 9 million people who currently buy coverage through federal or state insurance marketplaces get a premium subsidy to help them purchase. They are unlikely to switch from that, he said.

The main group that it would appeal to are the additional 10 million or so who buy coverage because they don’t get it through their jobs, and don’t get a subsidy.

Key will be just what the plans cover — and what they exclude.

“They’ll only be attracted if these association plans actually provide them coverage they want at a price that is better than the exchange plans,” said Antos.

This story was originally published by Kaiser Health News, a national health policy news service. It is an editorially independent program of the Henry J. Kaiser Family Foundation.