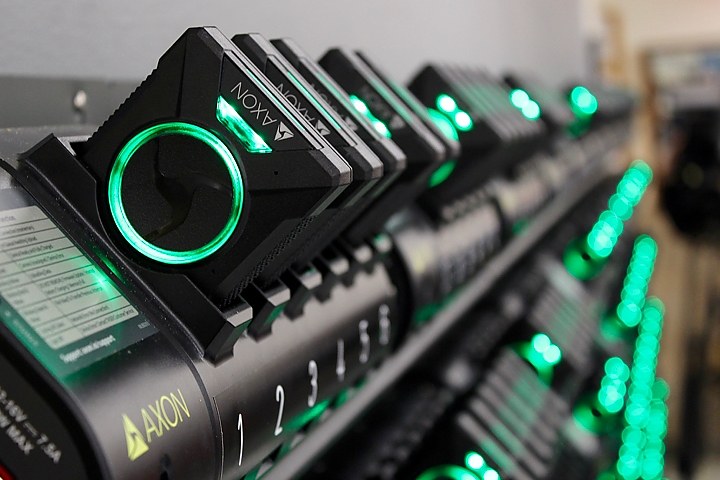 Thirty police officers have begun their training on when to turn on their new body-worn cameras — the start of a technological shift in how they patrol New Haven, one that police officials call a step toward transparency, accountability and trust.

The police department received a $779,000 grant to purchase 800 Axon Body-Worn Cameras. That’s enough for each officer to be issued a “hot” camera for use during a regular shift, and a “cold” camera — a backup at the station.

After the first cohort wraps up training, the department will wait a few weeks before lining up the next group. Leaders from the patrol, internal affairs and training departments all will review camera footage, just as they now do with any use of force, to recommend changes.

Officials promised that the body cameras will change the way that the department functions. They also acknowledged that tweaks will have to be made based on what officers learn from the early implementation.

“These body cameras are a vision for a more collaborative model of community policing … to bring this department into the 21st century,” Chief Anthony Campbell declared at a press conference prior to the training session at police headquarters.

As the program rolls out, the department will have to figure out the right amount of footage to record. Too little and the cameras might not catch a major incident unfolding; too much and the cloud storage, which costs $350,000 annually, might be overwhelmed.

Under a new general order approved by the Police Commission last month, officers are supposed to ensure that the camera is turned on “at the inception of an interaction with the public in a law enforcement capacity.” At that meeting, the police union asked for permission to turn off cameras while discussing charges, but a city lawyer said that exception would violate state law.

Reginald McGlotten, an officer who participated in the pilot, said he felt “weird at first. You’re not used to wearing a camera in everyday life.”

During the adjustment, the department will institute a 90-day grace period from the end of training for officers to get used to turning the devices on and off. No discipline will be doled out unless there are repeated violations during the grace period, according to the order. 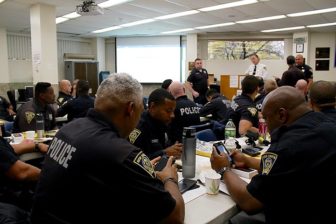 Producing the footage in response to public records requests will be another challenge for the department to surmount. According to the general order, the footage must be retained for “a minimum of 90 days unless reproduced for evidentiary purposes or otherwise required” — less than what some states require. If the department gets a Freedom of Information Act request during that time, the video will need to be reviewed and possibly redacted. That’s led to massive backlogs in Seattle or severely edited-down versions in other cities.

As part of the training on Wednesday morning, department officials showed how to use the cameras and linked cell phones, then quizzed the group about procedures. One officer said he was excited to have another tool to work with. The group was silent when asked about what questions their peers had been asking about how the cameras work.

Hartman said he expects that keeping a running record of events will change behavior on both sides of the camera, checking uses of force by police and aggression by citizens. That’s what several other police departments, including San Diego, found, reporting fewer citizen complaints (and a higher percentage of the rest proved false) and fewer instances of serious force.

A recent study of 2,200 police officers in Washington, D.C., found no difference in uses of force, misconduct complaints and conviction rates between the cops who received body cams and those in the same district who didn’t, after controlling for differences in race and gender, years on the force, past behavior and other factors.

“This is an enormous intervention into the police officers’ daily routine. … You would expect that the monitoring alone would change their behavior,” Alexander Coppock, a Yale political scientist who co-authored the study, said in a recent interview. “Shouldn’t they be more cautious about following the rules? Shouldn’t they be better at filling out paperwork because they have a video to remind them of an interaction? We found no statistically significance difference on anything we examined.”

Coppock clarified that there may have been changes, just none that were statistically significant. Part of that, he added, might be attributable to a “spillover” effect, in which the control group changed behavior because of the intervention on their colleagues.

Mayor Toni Harp, who advocated for body cameras while in the legislature, said she believes that transparency alone will benefit the department and the public.

“In a word, in New Haven, we’re happy to provide accountability to civilians for the actions of police officers,” Harp said at the press conference. “In New Haven, we’re willing to scrutinize what transpires on the streets to reinforce excellent training that recruits receive in our academy. In New Haven, we’re eager to improve those training techniques, if and as necessary, depending on what’s recorded by these body cameras.”

This story first appeared Nov. 2, 2017, in the New Haven Independent.