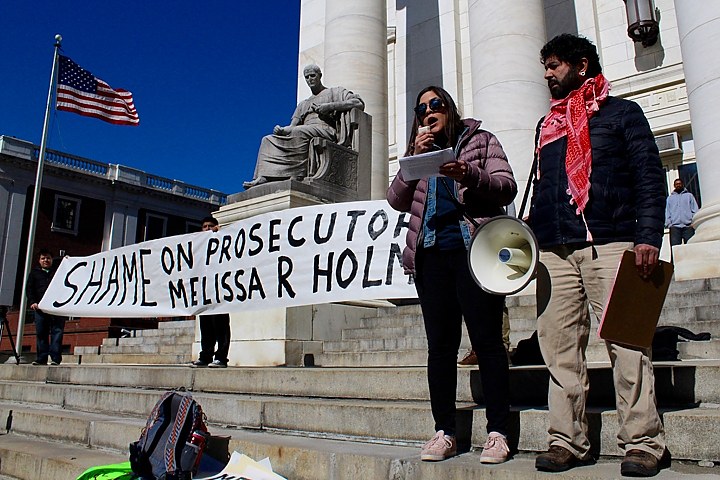 About two weeks ago, Marco Mendieta, a 24-year-old undocumented immigrant living in the Quinnipiac Meadows neighborhood, was arraigned in New Haven’s state Superior Court for breaking a traffic law. A judge released him without bail, accepting Mendieta’s promise to appear at the next hearing.

But Mendieta wasn’t able to keep his word. Before he even left the courthouse, federal immigration authorities picked him up and sent him to a detention facility in Massachusetts. After being shuttled to several different prisons, Mendieta ended up back in Mexico this week.

The protesters argued that ICE’s arrests deterred undocumented immigrants from using the justice system — effectively, closing off rights to which every American is entitled, even if they came here illegally.

Stretching white banners across the courthouse steps, more than 75 activists chanted in unison in front of 121 Elm St., shaming a prosecutor inside who they said had been complicit in ICE’s arrests. They called on state officials to shore up protections and urged immigrants not to enter courts alone.

“We’re here today because the Trump Administration has emboldened an already rogue agency to treat courthouses … as a hunting ground,” said Ana María Rivera-Forastieri, co-director of the Connecticut Bail Fund, which helps immigrants and low-income people avoid jail-time by posting bail. “We know that ICE agents are hanging out in the lobby, they’re racially profiling, they’re screaming out names —  all to hope that somebody falls into their deceptive practices.” 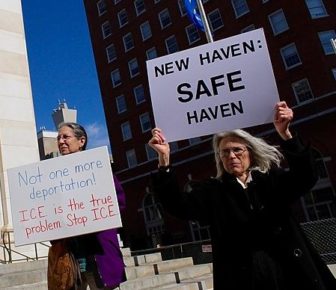 According to Obama-era guidelines, ICE agents aren’t supposed to raid hospitals, schools or houses of worship, unless they’ve received authorization from supervisors or face an imminent danger. (New Haven activists have used that loophole to create a network of sanctuary churches to shield deportees.)

But, as a new directive issued last month clarified, courthouses have never been on that list of “sensitive locations.”

When sanctuary cities don’t cooperate, ICE actually prefers to use the courthouse to make arrests, said John Mohan, an agency spokesperson. That’s because the courthouse is one of the few locations where they can track down undocumented immigrants who’ve evaded them with “multiple aliases,” “false addresses” or “fraudulent documentation,” Mohan said, while being sure that they haven’t snuck “weapons or contraband” past metal detectors that could put agents and bystanders at risk of a shoot-out.

“Courthouse arrests are often necessitated by the unwillingness of jurisdictions to cooperate with ICE in the transfer of custody,” Mohan said in an email. “Absent a viable residential address or place of employment, a courthouse may afford the most likely opportunity to locate a target and take him or her into custody.”

Mohan said that the ICE agents enter courthouses to take “targeted enforcement action against specific aliens,” rather than conducting random searches. Agents “make every effort to limit the time spent at the planned place of arrest,” he said, usually nabbing their target after the hearing concludes.

They also try to get the immigrants in cuffs in private. “ICE officers and agents make every effort to take the person into custody in a secure area, out of public view,” Mohan said, “but this is not always possible.”

“What ICE is doing is endangering the safety and well-being of whole communities of people who have compelling reasons to appeal to our courts for protection and relief,” Blank said. “But it’s also sending a message to those who abused and exploited those people, some of the most vulnerable members of our communities, that they may continue their violence, repression and coercion with impunity.”

The state’s judicial marshals can’t stop ICE from entering the building. “They’re allowed to come in and do what they have to do,” said O’Donovan Murphy, the director of the judicial marshal service. But his guards “don’t impede or assist” with the arrests, he said.

Kica Matos, the Center for Community Change’s director of immigrant rights and racial justice, said protestors needed to let ICE know they aren’t welcome in New Haven, including at the courthouse.

“For more than 12 years now, our city has fought to declare itself a sanctuary city. Our police do not cooperate with ICE, our mayor has stood up against the Trump administration, and our community has welcomed and embraced immigrants,” she said. “But we have a problem: ICE does not seem to have gotten the memo. They are unleashed, unshackled and out of control. It’s up to all of us to continue to build this wall of resistance and fight back. We have to stand up in New Haven!”

After reading about recent cases in Bridgeport and Stamford, including one reported pepper-spraying on the courthouse steps, U.S. Sen. Richard Blumenthal asked the Trump administration in a letter Tuesday to declare courthouses off-limits, echoing a similar plea from the state’s chief justice last year.

Michael Wishnie, a Yale Law School professor whose clinic represents the Connecticut Immigrant Rights Alliance (CIRA), said he’s looking into filing a lawsuit to stop the practice. He said he believes ICE’s arrests may violate a constitutional right to access the courts, several civil rights and a common-law privilege to arrive at judicial proceedings without facing arrest.

Activists also blamed local prosecutors for enabling ICE. They called out Melissa Holmes, an assistant state’s attorney, for working directly with federal agents by tipping them off to undocumented immigrants in her cases and coordinating transfers of custody.

When ICE is notified of alleged criminal activity, their agents often send out a detainer request. That motion asks the local police or state marshals to keep a suspect in lock-up — even past the scheduled release time. If the agency agrees, the detainer request buys ICE an extra 48 hours to fetch the immigrant into federal custody.

At least once, Holmes alerted ICE about an immigrant with an outstanding detainer request. Holmes did not respond to multiple requests for comment, including messages left by phone, email and a note at her office. 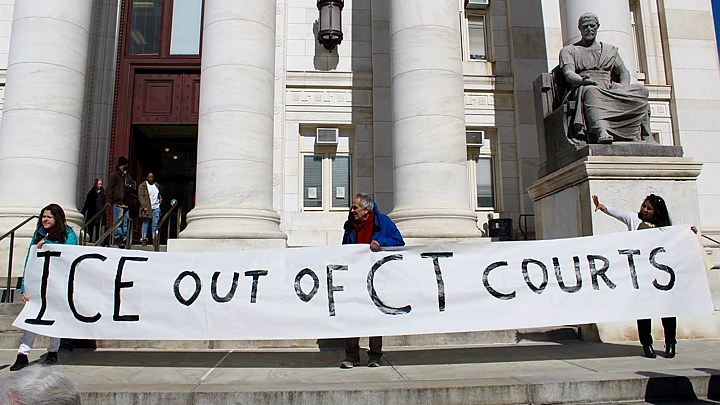 Activists on the courthouse steps.

Wishnie, the law professor, pointed out that these detainer requests are discretionary. “No state or municipal official is required to comply with ICE detainers,” he wrote in an email. In fact, Wishnie added, numerous judges have actually ruled that it might be “unlawful” to do so.

The Trust Act, a state law passed in 2013, prohibits Connecticut authorities from complying with a detainer request — unless the suspect fits into seven broad exceptions, like having a felony conviction, being identified as a gang member or terrorist, or appearing to present an “unacceptable risk to public safety.”

The statute, however, doesn’t prohibit prosecutors from talking with ICE, Wishnie said.

On behalf of CIRA, Wishnie has asked Kevin Kane, the chief state’s attorney, to adopt a “channeling protocol” to limit that kind of communications. If adopted, line prosecutors (just like lower-level employees in other state agencies) wouldn’t communicate with ICE, instead passing requests up the chain of command to their supervisors.

David Strollo, supervisory assistant state’s attorney in New Haven, said that Holmes once came to him to ask about the open ICE detainer. Together, they agreed they couldn’t ignore it.

“If a valid detainer is logged in [the FBI’s National Crime Information Center database], we have an affirmative duty to let them know that person is here,” Strollo said. “We’re not federal agents —  we don’t see an illegal immigrant and call ICE —  but we can’t ignore that [detainer]. We have a duty as lawyers and prosecutors.”

He termed a prosecutor’s calls to ICE “more of an inquiry.”

“We go to ICE —  and defense lawyers want us to do this —  and ask, ‘Does ICE still want to get this person?’” Strollo said. “‘Hey, is this somebody you’re picking up or not?’”

Activists questioned whether the state’s attorney needs to do even that.

“Why was [Holmes] even involved in the process?” asked Rivera-Forastieri, who helped create CIRA. “She’s supposed to be there making sure justice is served. Prosecutors should not be in the business of turning people over to immigration. It’s not their job.”

Others said Holmes’s communication with ICE indicated a larger problem in the state’s criminal justice system. 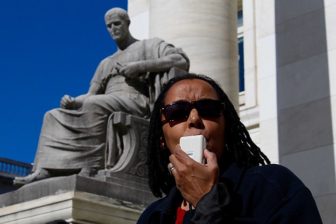 “The judicial branch, state and local, is not just a passive dissenter to ICE enforcement in the courthouses that occasionally says we’re against this but our hands our tied,” said Alook Bhatt, a community organizer with CIRA. “No, they’re actually a very active component connecting the carceral state with the immigration enforcement system.”

Strollo pointed out that detainer requests are “infrequent,” especially compared to the number of undocumented immigrants who show up for hearings every day.

He said he doesn’t believe anyone is scared to enter the building. “We don’t have any reputation for detaining people,” Strollo said. “In any given day, we have dozens of illegal immigrants, but it’s irrelevant to how we treat the disposition of those cases.”

Asked if he thought that Wednesday’s protests on the courthouse steps would change that, Strollo said no.

“People have the freedom to say whatever they want,” he said, “but it’s not going to change our policies whatsoever.”