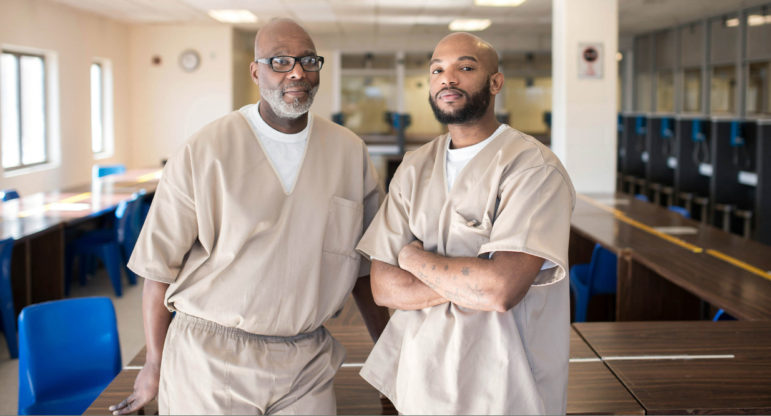 John Pittman, left, is Davon Eldemire’s mentor and is helping him plan for life after release. KARSTEN MORAN FOR THE MARSHALL PROJECT

Leona Godfrey was sitting down to dinner at a TGI Fridays in Orange in December 2013 when she glanced at a television and saw her little brother’s name on the local news. Davon Eldemire had tried to rob a small grocery store, shooting and injuring the owner. “I was devastated,” Godfrey recalled. “What was he thinking? I couldn’t eat.”

He was 20. She was 10 years older and had helped raise him, looking on in shame as he piled up an arrest record for drugs, larceny, and shooting an illegal gun in public. Lately, he had been talking about buying his daughter, Saniyah, a bed for Christmas. She figured the robbery was how he had planned to get the money. What he got instead was Christmas in jail, and then 14 years in prison for assault and attempted robbery.

At first Godfrey didn’t visit, less out of anger than inertia. But early last year, their mother, Linda Godfrey, started begging Leona to come see something neither would have expected: the prison seemed sincere about helping Davon turn his life around. Linda had attended a presentation by John Pittman, an older prisoner who was going to be Davon’s mentor, pushing him away from gangs and towards planning for his life after release. Linda was deeply moved. “He touched my heart,” she said of Pittman.

Davon had been selected for a pilot program called TRUE at Cheshire Correctional Institution. The effort represents the edge of experimentation for prison officials trying to help a population — young adults, roughly 18-25 — long known as the most likely to end up in prison and to commit more crimes after their release. Public officials have recently started to listen to neuroscientists who say the developing brains of young adults are still prone to impulse. They’re not juveniles under the law, but like younger teens, their minds are plastic and receptive to change. Vermont is raising the age of who is considered a “youthful offender” to 21, Washington is allowing certain crimes committed by those up to 25 to stay in juvenile courts, legislators in Texas are studying how “gaps in services” contribute to crime among 17- to 25-year-olds, and Chicago and San Francisco have set up special courts for young adults.

Uniquely, Connecticut is focusing attention on young men who are already in prison.

Read the remainder of this story in its entirety as originally published May 8, 2018, by the Marshall Project. This story was produced in partnership with Mother Jones.

‘Fore’ more years for our Duffer-in-Chief?

In addition to playing politics, American Presidents play golf, hole after hole after hole. It is one of the few bipartisan activities left standing. Dwight D. Eisenhower hit them straight down the middle often, as did his successor, John F. Kennedy, who is purported to have been the best golfer to inhabit the White House. The nation’s biggest golfer, however, was William Howard Taft, who weighed in at more than 300 pounds.

The New Connecticut Declaration of Inter-Dependence

Because of the previous course of human events in Connecticut, it has become necessary for we Connecticut citizens to dissolve the existing completely artificial municipal borders which have separated us from one another and to assume among the powers of the earth that having 169 separate and disparate cities and towns was a really bad idea.