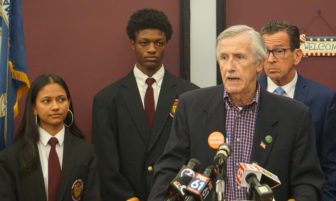 Malloy proposed the bill to ban bump stocks and other rate-of-fire enhancers in October following the Las Vegas concert massacre where bump stocks were used to kill 58 people and injure 581 more. But the governor attributed its passage largely to students across Connecticut who have actively pushed for reform, commemorating their efforts by hosting the Thursday morning bill-signing ceremony at Hartford’s Bulkeley High School library.

The ceremony’s location was of significance, Malloy said, given the recent rise of student activism in the gun-control movement following February’s Parkland, Fla. shooting. 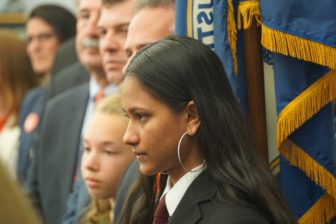 Jasmine Lall: “Our voices are the voices of a generation excited for change.”

Bulkeley High School juniors Zahir Akbar and Jasmine Lall spoke at the event, emphasizing the importance of student voices in catalyzing a collective call to action on issues that affect them.

“It’s very important for us as students to speak and enact change within our community. As students, this issue is hugely important to voice our concerns because our voices are also part of the national conversation, no matter our political views,” Akbar said. “We have the power as students and we should use this power to our advantage.”

Lall, who recently joined Malloy to discuss issues such as student voices, gun violence, and school safety, applauded the law as a positive step in safety reforms. She stressed the importance of student voices in the national narrative on guns, considering, “[students] speak from experience, coming from the perspective of people who every day attend school across the country.”

“Their opinions are valuable and need to be heard,” Lall said. “This bill is just one example of how valuable students’ voices can be for creating political change, no matter what you believe in.”

Lall and Akbar both participated in Bulkeley High School’s walk-out March 14, which accompanied the National High School walk-out day protesting legislative inaction on measures to reduce gun violence. The event was one of the many movements inspired by the surviving students of Marjory Stoneman Douglas High School in Parkland.

“The walk-out is what really first introduced me to the issue,” Akbar said.

Although fully automatic weapons have been banned in the U.S. for many centuries, bump stocks allow semi-automatic rifles to serve as automatic equivalents by manipulating the recoil of the gun so that the user can hold down the trigger and fire continuously. The Las Vegas shooter used the device, enabling him to fire more than 1,000 rounds in 10 minutes, killing 58 people and injuring many more.

“It is stunning when you think about the fact that one man could kill more than 50 people and injure 500 people in the span of about 10 minutes,” said Hartford Mayor Luke Bronin. “There should be nothing controversial, there should be nothing to discuss about this bill. Machine guns, fully automatic weapons, have been banned for decades and these devices turn semi-automatic weapons into machine guns.”

Lawmakers passed the bump stock bill by a large majority in both the state House and the Senate earlier this month, but not without resistance among some gun advocates. According to one published report, The Connecticut Citizens Defense League argued that the law would not prevent an individual from replicating the use of a bump stock.

“Once again, CCDL would like to point out that the law that did pass does absolutely NOTHING to increase public safely, and was passed solely to provide a feel-good but hollow victory to anti-Constitution, vocal minority groups like CAGV and Newtown Action Alliance,” the CCDL said on its website following the bill’s passage. “Bump fire is a technique that can be easily replicated without any aftermarket accessories at all,” the organization said.

By initiating the law, Malloy acts in keeping with Connecticut’s legislative tradition of making gun violence a priority. Connecticut is one of the handful of states to criminalize bump stocks thus far.

After Newtown’s Sandy Hook Elementary School shooting in 2012, state legislators enacted a wide range of gun reforms; and in 2016, the adopted a measure requires individuals with temporary restraining orders to turn over their guns within 24 hours.

Allies of the new bump stock law praised Connecticut for its leadership in furthering gun violence legislation despite apparent stagnancy on the national level.

“What have we gotten out of Washington? Nothing,” said Tom Campbell of Newtown Action Alliance. Campbell deemed Sandy Hook the impetus of the first batch of ‘thoughts and prayers’—a phrase that, to many gun-control advocates, has come to represent political inaction on mass-shooting prevention.

“It took the governor and the legislative branch here in Connecticut less than six months to put together a very effective … series of laws,” Campbell said.

Rep. William Tong of Stamford identified Connecticut as among the few states to take on ghost guns, or home-made guns that consist of pieces of weapons available on the internet. A potential ghost-gun ban entered the discussion during the last legislative session but died in both houses.

As the growing divide on gun control continues to persist in Connecticut and nation-wide, students remain at the forefront of the fight, pressuring lawmakers to take action in ensuring their safety at school and beyond.

“Our voices are the voices of a generation excited for change,” Lall said. “I’m really excited to see how student voice continues to shape our country.”