HHS to allow insurers’ work around on 2019 prices 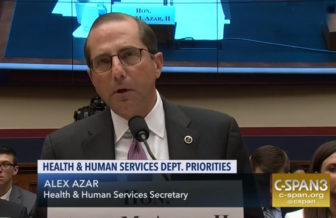 Alex Azar appearing before the House Education and Workforce Committee.

Federal officials will not block insurance companies from again using a workaround to cushion a steep rise in health premiums caused by President Donald Trump’s cancellation of a program established under the Affordable Care Act, Health and Human Services Secretary Alex Azar has announced.

The technique — called “silver loading” because it pushed price increases onto the silver-level plans in the ACA marketplaces — was used by many states for 2018 policies. But federal officials had hinted they might bar the practice next year.

At a hearing Wednesday before the House Education and Workforce Committee, Azar said stopping this practice “would require regulations, which simply couldn’t be done in time for the 2019 plan period.”

States moved to silver loading after Trump in October cut off federal reimbursement for so-called cost-sharing reduction subsidies that the ACA guaranteed to insurance companies. Those payments offset the cost of discounts that insurers are required by the law to provide to some low-income people to help cover their deductibles and other out-of-pocket costs. [Read about Connecticut’s rate increases here.]

States scrambled to let insurers raise rates so they would stay in the market. And many let them use this technique to recoup the lost funding by adding to the premium costs of midlevel silver plans in the health exchanges.

Because the formula for federal premium subsidies offered to people who purchase through the marketplaces is based on the prices of those silver plans, as those premiums rose so did the subsidies to help people afford them. That meant the federal government ended up paying much of the increase in prices.

At the committee hearing Wednesday, under questioning from Rep. Joe Courtney (D-Conn.), Azar declined to say if the department was considering a future ban.

The fact that the federal government ended up effectively making the payments aggravated many Republicans, and there have been rumors over the past several months that HHS might require the premium increases to be applied across all plans, boosting costs for all buyers in the individual market.

Seema Verma, the administrator of the Centers for Medicare & Medicaid Services, told reporters in April that the department was examining the possibility.

Apparently that will not happen, at least not for plan year 2019.

This story first appeared June 7, 2018 in Kaiser Health News (KHN),a national health policy news service. It is an editorially independent program of the Henry J. Kaiser Family Foundation which is not affiliated with Kaiser Permanente.