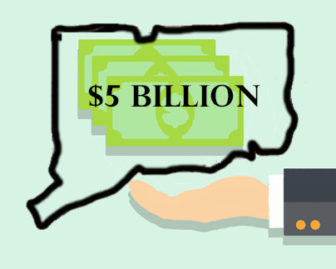 Connecticut residents donated an all-time high of $5 billion to charity in 2015, according to a recent report from the Connecticut Council for Philanthropy. However, the number of residents that donate is decreasing, raising questions about the sustainability of these gifts.

In-state foundations gave $1.2 billion in donations while the remaining $3.8 billion came from independent individuals and their families, the CCP report said. When it comes to charitable giving, Connecticut residents are above average in many ways, it said.  The council reports that 74 percent of all Connecticut households donated to charity in 2015, significantly above the national average of 55 percent. Connecticut residents also tend to donate more money to most types of organizations.

Nearly half of the $3.8 billion in donations from individuals came from people whose annual incomes exceed $200,000.

“The data reflects some of the inequality that exists in Connecticut,” says Julie Loughran, President and CEO of the Connecticut Community Foundation. “You have wealthy individuals and large foundations giving more, which is reflected in the dollar number going up, but low- and middle-income donors are giving less. What is particularly concerning about that is that gifts from smaller donors are often critical to local community-based organizations.”

Local nonprofits are largely sustained by donations from low- and middle-income donors. It becomes even more important for these nonprofits to find their support locally when 63 percent of foundation dollars go out of state, the CPP report says.

The report also notes that, while private foundations give the most money, community foundations are unique in that they involve the philanthropic visions of local community members. This means that residents of various income levels can be involved in strategic charitable giving.

The council is also concerned that these residents might lose the incentive to donate due to the 2017 tax law, which doubled the standard deduction. “Because the standard deduction has doubled, fewer people are going to be able to itemize their deductions. If someone was [previously] motivated to make charitable gifts in part by the tax deduction, this might incline them not to give, to reduce their giving, or to give more sporadically,” Loughran said. “But it’s unclear how many donors are motivated by the deduction. You may have a lot of people who just want to give to the things they care about and share their wealth. We can’t know yet how this will affect individual donor behavior.”

Loughran observed that Connecticut is a particularly philanthropic state. She said the hope is that it will continue to be so, and that low- and middle-income residents can continue to donate to local nonprofits.