Yes they can (name a school after Barack Obama) 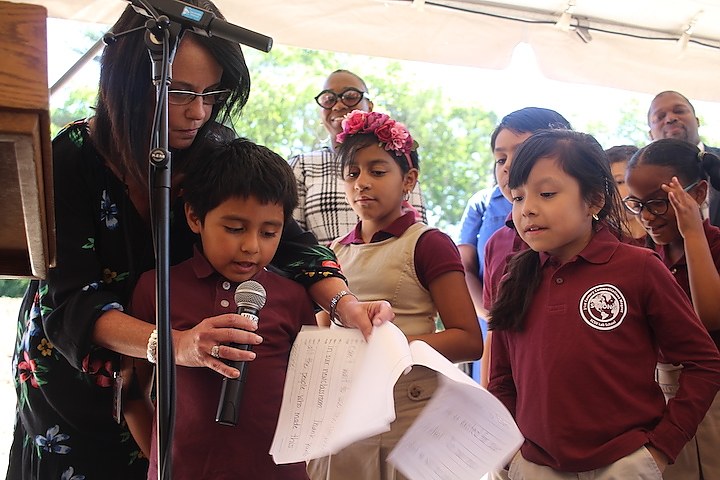 With a shout of “Yes we can!” and the toss of some dirt, politicians and city officials launched the building of what will be the Barack H. Obama Magnet University School on the Southern Connecticut State University campus.

That all happened during a groundbreaking ceremony held under sunny skies Thursday morning as state and city officials celebrated the beginning of construction for the long-anticipated — and sometimes controversial— new school and the renaming of it in honor of the 44th president of the United States.

Construction for the new 62,000 square-foot school, which will replace the Strong 21st Century Communications Magnet School, started Friday. The city has an agreement with Southern that allows it to lease space to build the pre-K to grade 4 lab school on the university’s campus at 69 Farnham Ave. Alders agreed to build the new school with the help of about $34.2 million from the state; the city has to put up about $10.8 million. The larger school is expected to grow from the 350 students now served to about 490. 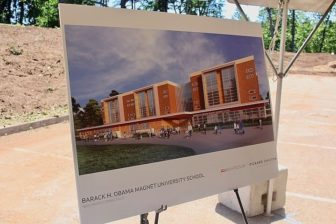 A mock up of the school to be named after President Barack Obama.

Alders agreed to approve local funding for the school amid intense and ongoing debates over whether the city should continue building schools in the face of big budget deficits and the possibility of closing schools. Current Board of Education President Darnell Goldson commended alders for pushing forward with the school in the face of opposition to the cost.

In addition to a new school building, part of the new ethos of the school will be grooming future teachers for New Haven’s public schools with help from Southern’s education school.  While the school does receive some students from surrounding towns, the majority of students are from New Haven. The school is about 60 percent African-American and 33 percent Latino. The best-case scenario is to open the school to students in time for the 2020 school year.

Will Clark, public schools COO, said Thursday that this is the 42nd building project the district has embarked upon since the Citywide School Construction Program began in 1995. He also said it was the culmination of a dream to have a public school on a university campus that also has the added benefit of training new teachers who are from New Haven and stay here.

“You come in through our program, work your way up through graduation, through our Promise Program you get free tuition at Southern, go to the education school, train in the Strong School and then come and teach for us,” he said. “That’s not a bad deal, huh?”