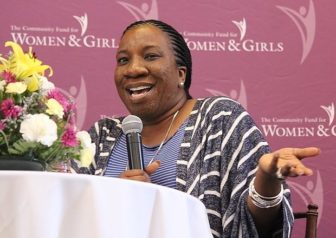 Tarana Burke: “There’s never been a movement to say, ‘Me too, take him down. That’s not what it’s about.”

Don’t know what to do in the face of the scrutiny brought to bear by the #MeToo movement? Founder Tarana Burke offered a suggestion: Use some common sense.

The civil rights activist and sexual assault survivor brought straight talk and no-nonsense candor to a packed Yale Law School auditorium Monday evening for the Community Foundation for Greater New Haven’s convening of the annual meeting of the Community Fund For Women & Girls.

The event was sponsored by the Community Foundation and the Yale University Office of Diversity and Inclusion along with the New Haven Alumnae Chapter of Delta Sigma Theta and the Theta Epsilon Omega Chapter of Alpha Kappa Alpha sororities.

Burke founded the movement 12 years ago to help survivors of sexual violence, particularly those survivors who are women of color. The movement became a national conversation when the hashtag #metoo went viral on social media.  As celebrities like Alyssa Milano added their voices and star power to the movement to expose the prevalence of sexual violence in the entertainment industry the careers of powerful men like former film producer Harvey Weinstein and former actor/comedian Bill Cosby have been toppled. In the cases of both Weinstein and Cosby, criminal charges have been brought to bear.

Burke sat down Monday for a conversation with Khalilah Brown-Dean, associate professor of political science at Quinnipiac University and vice chair of the Community Foundation board. She told audience members that if they believe that the movement is about these bad actors losing their jobs, their reputations, their power and possibly their freedom then they’d missed the point.

“MeToo” is about survivors, not perpetrators.

“This was not a plot to ruin his career,” Burke said of Weinstein. “In fact, the women that spoke up thought their careers would be ruined. It was about every day regular people around the world … making a declaration and saying, ‘I’m a victim of sexual violence.’

She said the movement has always been about helping survivors find space for healing and connecting them with resources for that healing so that they can be advocates who help disrupt and dismantle the systems that perpetuate sexual violence. Burke noted that in the case of Harvey Weinstein the corporate response of the Weinstein Company has been to distance itself from him and his alleged actions. It has yet to acknowledge that people inside the company likely enabled him to commit his alleged crimes, she said.

Brown-Dean asked Burke about a recent exchange that she had with Tony Robbins, a life coach with millions of Twitter followers who dismissed the movement by suggesting that it was about victimhood and that it had created an environment where men didn’t know how to conduct themselves in the workplace. Robbins ultimately apologized after a video of his interaction with a survivor of childhood sexual abuse went viral.

“It makes my blood boil,” Burke said recalling the exchange. “It’s such cowardice. And it’s not just cowardice but callousness. You’re going to watch millions of people saying, ‘My life has been touched by this thing,’ and your response is, ‘Aww man, now what am I supposed to do?’

“This is the kind of thing women are dealing with,” she said. “We can’t have a conversation. I’m speaking English. and you’re speaking Klingon.”

Burke said in moments like these, allyship is important, particularly from men.

“Now people are asking what can we do,” Burke said. “Stop this type of nonsense.”

She said when men hear remarks like Robbins’, or suggestions that women should just be eliminated from a workplace, men must stand up and push back.

“Men can say, ‘That’s bullshit,’” she said. “We have to confront the problem.”

“Common sense tells me if you’re dealing with this issue after you’ve hired people … you’ve already messed up,” she said. “My question to corporate people is what are you doing to vet people? What kind of culture do you have at your job where Bob feels it’s OK to take his penis out and get promoted again and again?”

This story first appeared in the New Haven Independent.