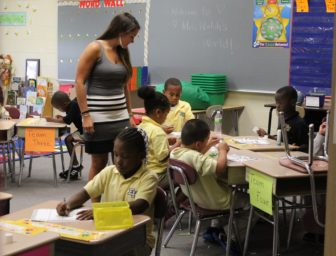 A third grade classroom at an elementary school in East Hartford.

The U.S. Department of Education has halted an Obama-era rule designed to stop students of color from being over-identified as having a disability — and waded into a complicated research dispute in the process.

The move, made late last week by Secretary Betsy DeVos, was widely expected and months in the making, but still drew the ire of advocates for students with disabilities. It puts a two-year pause on the rule, which was issued in late 2016 and was set to go into effect this coming school year.

“The secretary is concerned that the regulations will create an environment where children in need of special education and related services do not receive those services because of the color of their skin,” the department said in the notice of the rule change.

Chalkbeat has previously reported on research suggesting that DeVos may have a point. Paul Morgan, a professor at Penn State, has conducted a number of studies on the topic along with colleagues and argues that his findings show that there should be less concern about over-identifying students of color and more concern about under-identifying them.

“You don’t hear a statistic like ‘minority children are twice as likely to have asthma’ and automatically conclude that pediatricians are racially biased, and let’s stop identifying children who are minorities with asthma,” he previously told Chalkbeat.

In announcing the delay, the department cited Morgan’s research.

Morgan says that some have confused the raw rates of students who quality for special education — in which black students outnumber white students — as evidence of bias. In fact, his research has shown that controlling for factors that might affect a student’s likelihood of actually having a disability, like poverty and prior test scores, students of color are less likely than similar white students to receive special education services.

Critics of Morgan’s work say he is painting with too broad of a brush. One of his studies, according to a critique, oversimplified the issue, “seeming to allow no other hypotheses than either universal over- or universal under-representation by race/ethnicity, thus ignoring the complexities that emerge in local contexts.”

In the announcement of the rule delay, the Department of Education emphasized the disagreement among researchers. “The status quo requires further scrutiny and study to, among other things, review the conflicting research regarding significant disproportionality and the over or under identification of children in special education,” the notice said.

The Obama regulations would have created a national, standardized approach for identifying disproportionality in special education.

IDEA, the federal disability law, presently requires states to prevent any student group from being disproportionately identified as having special needs. But states have used their own methods for determining who is identifying too many students. That system has meant only a small fraction of districts — 3 percent — have been found to have a problem, which requires setting aside federal money to address.

States can still follow the Obama-era rule if they want to, and at least 15 states said earlier this year said they planned to regardless of DeVos’s decision.