A crowd pushed Democratic gubernatorial frontrunner Ned Lamont on those progressive planks Tuesday night at a campaign stop not at the AFL-CIO or Planned Parenthood, but New Haven’s Tower One/Tower East senior living facility. The 50 seniors in attendance proved a tough crowd, both in the substance of their questions and in their generally positive post-event appraisals.

Lamont, a Greenwich businessman who handily won the Democratic Party’s endorsement at a May convention, was making the rounds in New Haven in anticipation of his Aug. 14 primary against the only other remaining contender for the Democratic nomination for governor, Bridgeport Mayor Joe Ganim.

On Tuesday afternoon, Lamont, who’s financing his own campaign, made two New Haven campaign stops in the Hill neighborhood: the first at Tower One/Tower East, a 328-unit apartment complex for seniors located at the intersection of Church Street South and South Frontage Road, and Columbus House, a homeless shelter and social service agency located at 586 Ella T. Grasso Blvd.

Lamont’s visit to Columbus House proved to be more of an opportunity for the candidate to learn about the specific housing and outreach services provided by that 36-year-old social service agency. (The homeless themselves appeared to be out on a smoke break.) His visit to Tower One/Tower East found him confronted by dozens of well-informed seniors who wanted to know exactly how Lamont plans to address the most pressing issues facing the state and the country.

His audience left the meeting contented, for the most part, that Lamont’s values aligned with their own.

In a ground floor meeting room at Tower One, New Haven Mayor Toni Harp and State Sen. Martin Looney introduced Lamont. They also implored the seniors present to vote for the entire Democratic ticket this November, including for Looney, who is up for reelection.

The hardball questions started coming after Lamont finished his now familiar stump speech about wanting to make Connecticut a place where his three adult children will want to return to to find educational and economic opportunity for themselves and their own children. 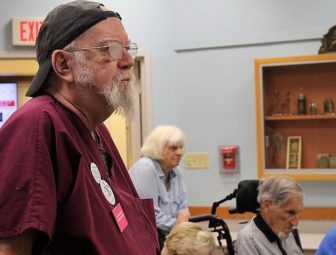 The first question came from Peter Goodman, a former spokesman for New York City’s Office of Labor Relations and a 10-year resident of Tower One/Tower East.

Sporting an array of pins, including one in support of Planned Parenthood, Goodman noted that hundreds of thousands of protesters took to the streets this past weekend in opposition to the Trump administration’s separation of families at the U.S.-Mexico border. He referenced the general hostility of the Trump administration to Hispanic immigrants through the aggressive apprehension, detention, and deportation policies of the federal Immigration and Customs Enforcement (ICE) agency.

“Do you have any plans to protect the people of Connecticut from ICE raids?” he asked.

He also asked for Lamont’s thoughts on last week’s Supreme Court decision in Janus, which ruled that public sector employees can opt out of paying union dues even if they benefit from that union’s collective bargaining efforts.

“Will you work with the existing collective bargaining agreements” in Connecticut? Goodman asked.

Impressed with Goodman’s knowledge of current affairs at the federal and state level, Lamont asked him if he wanted to ask anything else. So Goodman continued.

He asked Lamont where he stands on protecting women’s right to an abortion, particularly in the face of a Supreme Court that will likely become more hostile to that right once President Trump appoints a replacement for the retiring justice Anthony Kennedy.

And he told Lamont that he and his husband volunteered for Lamont’s 2006 successful primary challenge to Connecticut’s Democratic senator at the time, Joe Lieberman, who wound up running as an independent and beating Lamont in the general election.

“You were one of the few politicians who didn’t have to ‘evolve’ to recognize me and my husband as a valid entity,” Goodman said. He told Lamont he’d never forget the candidate’s early support of his own same-sex marriage. He and his husband Curtis Miller went to Toronto in 2005 to get married, and then returned to Connecticut.

In response, Lamont expressed solidarity with many of the sentiments Goodman has expressed, without necessarily diving deep on any specific actions he would take on the issues if elected governor.

“I’ll stand up for labor,” he said. He also said he would defend a woman’s right to an abortion, which is already enshrined in the Connecticut State Constitution.

“I’m worried about this Supreme Court,” he said. “They’ve lost all their moderate instincts. They’re much more politicized, much more right wing” than they used to be.

As for Goodman’s question about immigration policy and ICE, Lamont said he had seen last weekend’s protests firsthand in Stamford and Fairfield. He said his thoughts on the Trump administration’s detention and family separation policies correspond with that of former First Lady Laura Bush. “This ICE policy of separating families is cruel,” he said, “immoral, and it breaks my heart.”

He said he has put out a challenge to the five Republican candidates for governor to take a public stance on Trump’s current border policies.

“What I heard [in response] was crickets,” he said.

Mila Nishpaul, a Holocaust survivor who said she moved to Tower One just a few weeks ago after spending over seven decades in Bridgeport, told Lamont that she remembers Connecticut brimming with wealth and opportunity when she arrived back in 1941. “What happened?” she asked. 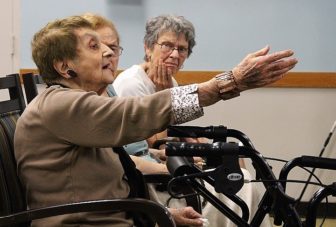 Mila Nishpaul has a question.

Lamont said Connecticut still has one of the most highly educated workforces and is situated in a vibrant economic corridor in New England.

“I do think over the last 30, 40, 50 years, we haven’t made the right investments,” he said. He promised to dedicate state funds towards public transportation and education improvements, and in programs that adequately train workers for 21st century jobs in healthcare and technology.

“We have tens of thousands of good paying jobs that are going begging” because of a lack of adequate training, he said.

“What is your stance on tolls on highways?” asked Tower One/Tower East resident Izzy Juda.

Lamont said he is for implementing electronic tolling on the state’s highways, but that he would charge only big, out-of-state trucks to start.

Another resident asked how that type of targeting is possible. Lamont said each truck has an electronic responder that can be registered by the state, which in turn would allow the state to bill those large trucks carrying freight between states without unduly burdening local residents.

“I think that’s a reasonable place to start,” Lamont said.

One woman asked how he felt about legalizing marijuana.

“It’s an idea whose time has come…” Lamont began tentatively, before another resident shouted out, “And it’s not bad for you!”

Lamont ran with it. “It’s not a gateway drug compared to opioids,” he said. He said he would try to legalize marijuana, regulate it, tax it, and then put that tax money into opioid treatment programs.

Another man asked Lamont if his campaign feels prepared to square off against Ganim in the August primary.

“People know that I’m going up to Hartford to bring real change,” he said. He said Bridgeport should be doing a lot better than it currently is in terms of education, crimes and jobs after nearly two decades under Ganim’s leadership.

But he also claimed he did not want to sling mud at his opponent. “I’m running a positive campaign,” he said.

After the event, several of the Tower One/Tower East residents who had asked questions expressed a modest level of enthusiasm for the candidate.

“It’s nothing that I didn’t know,” Nishpaul said about Lamont’s response to her question about the changes to Connecticut between when she arrived in 1941 and today. She said many politicians promise and promise to fix everything from budget deficits to broken public transit to poor education and a stagnant economy. “Who can fix it?” she asked.

As for Ganim’s leadership in Bridgeport, she said, “I don’t think he’s done the worst job” as mayor.

Juda said he was very happy with Lamont’s response on tolls. A second man, who preferred not to be identified and who had asked how Lamont would specifically target big trucks with electronic tolls, said he remained dubious about the legality and technical feasibility of Lamont’s tolls proposal.

Goodman said he still admires Lamont for his anti-war U.S. Senate campaign in 2006 and for being the nephew of socialist philosopher and former ACLU director Corliss Lamont. But, he said, he thought Lamont spoke a bit too generally in his response to his specific questions about standing alongside threatened public sector labor unions and undocumented immigrants.

“He’s a slick son of a bitch,” Goodman said with a smile.

This story was originally published July 4, 2018, by the New Haven Independent.