How taking a knee in Haddam echoed in statewide politics 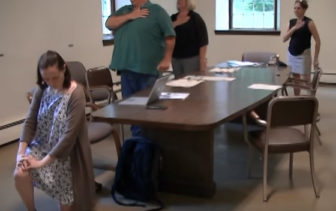 Melissa J. Schlag takes a knee while the rest of the Haddam Board of Selectmen recited the Pledge of Allegiance.

It was a 12-second protest — waged by a single selectwoman in a nondescript room in a small Connecticut town — but it has provided days of political outrage and the perfect platform for two Republican candidates to reassert party values.

It began July 16 at a Haddam Board of Selectmen meeting, when selectwoman Melissa J. Schlag took a knee while the rest of the board recited the Pledge of Allegiance.  Schlag, a Democrat, said later that she kneeled in protest of President Donald Trump’s recent meeting with Russian leader Vladimir Putin and the Trump administration’s immigration policies.

A video of the meeting, which was taped by Valley Shore Community Television, caught the eye of Republican state Sen. Art Linares, who is facing an Aug. 14 primary for the GOP nomination for state treasurer. (A bit of history: Schlag was the 2012 Green Party candidate for the 33rd District seat in the Senate won by Linares that year.)

Linares issued a Monday morning press release, calling on Schlag to “immediately apologize to Haddam residents who are offended by her lack of respect,” and followed up later that same day with a Twitter video.  In the video, Linares stands outside the Haddam town office building as he escalates his criticism into a full-fledged call-to-action, urging Schlag to step down from her role as selectman.

“I am asking the Republicans, the people of Haddam, to demand that Melissa Schlag resign from her position and that she apologies to the people of Haddam, to the veterans of Haddam who have served our country with the ultimate sacrifice and that she actually salutes the flag during the Pledge of Allegiance,” said Linares, who was dressed in a pair of khakis and a gray blazer as he stood alone in front of a shaky camera.

Haddam Selectwoman Melissa Schlag took a knee during the Pledge of Allegiance demonstrating a complete lack of respect for our country and the symbols that unite us. ?????? pic.twitter.com/NruKAhp6s0

But the fall-out didn’t end there.

By Wednesday morning, Republican gubernatorial candidate Timothy Herbst, who is in a 5-way primary for the GOP nomination, was denouncing Schlag and calling for her resignation from a much more visible perch — the set of FOX & Friends, a daily morning conservative news/talk program on Fox News Channel.

“She needs to resign immediately. One of the things our flag stand for, it stands for our freedom. It stands for our democracy. It stands for the fundamental ideal that we can have differences of opinion. But we all stand in respect of our flag. Many people, including my 93-year-old grandfather, was a veteran, fought in defense of the very liberties that flag resembles,” Herbst said, topping off his condemnation with a message to his electorate:

“I’m running for governor because I think we need a wholesale change in Connecticut. We need people who are going to respect our president, respect our flag, respect our constitution.”

Linares, who said his video is garnering wide support from local veterans, is now trying to mobilize a counter-protest with veterans and others who were offended by Schlag’s actions.

“People are saying she has the right to kneel. Well, I have the right to call for her resignation, and that’s what I’m doing,” Linares said Wednesday. “I felt it was important to stand up for this.”

As for the woman at the center of the controversy, Schlag said she has received an outpouring of responses that range from support to threats. She called the statements of the Republican politicians “disgusting.” 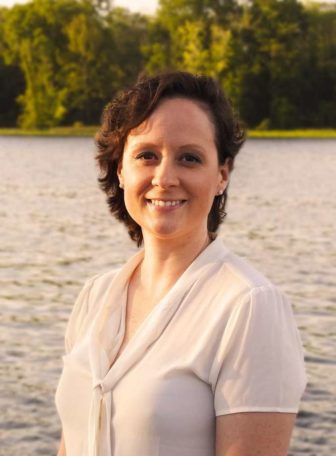 “Any candidate that tells a citizen of the U.S. that they don’t have a voice should resign and doesn’t belong in our government,” she said. “Through their political motivation, they are trying to silence the people by taking away our First Amendment rights for political gain.”

With two conservative parents and a father who served in the Air Force, Schlag said she knelt not out of disrespect for the flag and for military, but rather out of love for her country, adding that she has received many positive responses from veterans urging her to “keep going.”

“The intention of my silent protest was the bring the injustices of our country to the forefront,” she said. “The loud wave of ugly attacks on our basic rights set forth under the constitution shows just how much we have to lose.”

“My kneeling before the flag is a silent cry for our country to be better.”

Prior to the senator’s denunciation on Twitter, Schlag had defended her actions in a letter she posted on her own social media, claiming the protest was addressing a number of actions orchestrated by the Trump Administration, saying, “As long as Donald J. Trump is the President of the United States, I will kneel.”

Schlag’s protest also drew scorn from Republican First Selectwoman Lizz Milardo, who released a statement characterizing the demonstration as “a selfish act of attention” that “does not belong in the town meeting.”

“The flag does not represent a president or issue you take exception to it represents our nation and freedom that others have sacrificed and defended for the rest of us,” Milardo said. “I have many residents upset.”

The two women have some political history of their own. Milardo ousted Schlag, who served as first selectwoman of Haddam for two years until losing by 25 votes to Milardo in the 2015 election.

Milardo said she is not surprised by the protest because, she said, Schlag demanded that the flag in the First Selectman’s office be removed from the office and placed in storage while she was serving in that role a few years ago.

“I am immediately rectified that after I won the election. The flag proudly hangs in my office,” Milardo said.

Schlag said she did not place the flag in storage, but was simply rearranging her office and moved the flag and hung it on a pole outside the town hall.

“During my first year,” she added, “I purchased more than 20 flags to line the town for the Memorial Day Parade.”