Black teachers leave schools at higher rates — but why? 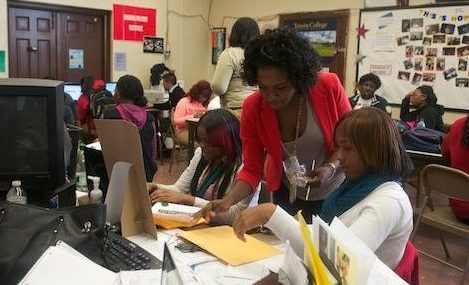 A classroom in Bridgeport High School.

In recent years, there’s been an increased push to get more teachers of color into the classroom, often highlighting large gaps between student and teacher demographics.

National data shows the problem isn’t just recruiting those teachers, but retaining them as well. Now a new paper offers a detailed look at the reasons why in one state, and hints at potential solutions.

That’s important because a spate of recent research has linked teachers of color to better outcomes for students of color; some advocates point to inherent and democratic benefits for all students of a more diverse teaching profession. “With the increasing diversity of student populations and a societal striving to achieve educational equity, the issue of developing a diverse and effective teaching workforce remains urgent and pressing,” writes researcher Min Sun of the University of Washington.

Sun’s paper, published in the peer-reviewed journal AERA Open, uses detailed data from 2004 to 2015 to focus on black teachers in North Carolina.

First, the study documents higher turnover rates — meaning leaving one’s school either for a different one or departing teaching altogether — among black North Carolina teachers. The gap was around four percentage points, although it fluctuated somewhat between years and grade levels. In a given year, about 12 percent of black teachers left public school teaching in North Carolina, compared to 10 percent of white teachers. Another 10 percent of black teachers switched between schools; eight percent of white teachers did.

National data points to a somewhat larger overall turnover disparity of about seven percentage points between black and white teachers (22 versus 15 percent, respectively).

But when the North Carolina paper digs into this more, a striking finding emerges: once factors that might predict turnover — such as school type and a teacher’s age — are controlled for, the racial turnover gap disappears. In fact, in schools with more black students, black teachers were actually slightly more likely than their white colleagues to remain in the classroom.

So why does a raw gap exist?

For both black and white teachers, working in a school with more black students and in higher poverty neighborhoods predicted turnover; similarly, schools where the teachers rated the professional support and leadership as worse saw more teachers leave. In general, when teachers moved schools they moved to ones with higher test scores, more white students, and better working conditions.

In other words, black teachers in North Carolina aren’t necessarily more likely to switch schools or professions; they’re more likely to teach in schools that lead to higher quit rates.

“Black teachers tended to work in hard- to-staff schools that serve a larger proportion of students of color or underperforming students, have poorer school supports, and are in lower [socioeconomic] communities,” Sun wrote.

Of course, the study is based on just one state, where there are few teachers of color who are not black. But insofar as the results apply in other places, efforts to retain teachers of color might require making the schools they teach in more appealing places to work — though how to do so is often debated.

Sun concludes the paper by calling for more “rigorous studies of programs or policy that aim to attract and retain effective teachers of color in schools serving historically underserved students.”

Three levels of risk are to inform decisions to open schools in person, remotely or with a hybrid model.