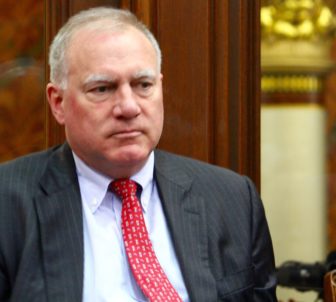 A federal judge issued a temporary restraining order Tuesday to stop the release of downloadable plans for 3D-printed, plastic guns that were set to be publicly available on August 1.

The judge’s ruling, from a federal court in Seattle, came after Connecticut, along with seven other states and the District Columbia filed a lawsuit against the Trump administration in response to a  settlement between the federal government and a private company, Defense Distributed, that would have allowed plans for the guns to be made public.

A hearing in federal court was scheduled to determine if removing the plans from the list of prohibited items would result in irreparable harm.  Tuesday evening, the federal judge assigned to the case ordered that the release of the plans be halted.

“The court today has wisely ordered the Administration to continue to bar any distribution of plans for 3-D printed firearms for now, and we are grateful for this common-sense action,” said George Jepsen, Connecticut’s attorney general.

“To allow the federal government to reverse course, without legal justification and in violation of federal law, and to make these weapons easily available to those who might seek to harm Connecticut residents or to jeopardize our national security simply defies logic,” Jepsen said in a statement. “We look forward to continuing to aggressively make the case that these types of plans should be permanently barred from public dissemination.”

The settlement, which was made public on July 10, between the federal government and Defense Distributed allows the company’s blueprints to be made available online. The blueprints explain how to print a fully functional, plastic weapon without a serial code making them undetectable and untraceable.

The federal government filed a temporary modification on July 27 allowing the release of these blueprints. According to Jepsen, Congress should have been alerted 30 days prior to the release date in order to allow appropriate time for review.

The settlement comes five years after the federal government originally prevented the company from making their plans available, arguing it was equivalent to an illegal gun export since anyone in the world could download the plans. Throughout the Obama and Trump administrations that stance was upheld, and efforts were made earlier this year to dismiss the case.

Then, without warning, the federal government reached a settlement with with the company, Jepsen said.

“It is confusing. Normally when you win a case you don’t hand a victory and settlement fees to your opposition,” Jepsen said.

Between Friday and Saturday night more than 1,000 people had downloaded blueprints for the AR-15, according to published reports. It is unclear why these plans were made available early, since all plans for the weapons are scheduled to be available August 1. Defense Distributed has plans for AR-15s, AR10s, a pistol called the Liberator and a Ruger 10/22.

The National Rifle Association disputed the argument Tuesday that making the plans available to the public will lead to actual use of the weapons.

“Many anti-gun politicians and members of the media have wrongly claimed that 3-D printing technology will allow for the production and widespread proliferation of undetectable plastic firearms,” said Chris W. Cox, executive director of the NRA’s Institute for Legislative Action.  “Regardless of what a person may be able to publish on the Internet, undetectable plastic guns have been illegal for 30 years.  Federal law passed in 1988, crafted with the NRA’s support, makes it unlawful to manufacture, import, sell, ship, deliver, possess, transfer, or receive an undetectable firearm.”

A Newtown-based, grassroots organization formed in response to the mass shooting at Sandy Hook Elementary School in 2012 is spearheading a national effort to stop downloadable plans for 3D-printed, plastic guns to be publicly available on August 1.

Others, though, see the settlement as an abdication of responsibility by federal officials.

The group, Newtown Action Alliance, mobilized in reaction to a settlement as soon as it became aware of the issue.

“We alerted Congress to this issue,” said Po Murray, chairman of the organization. The group is working in conjunction with Jr. Newtown Action Alliance., NoRA4USA and Fred Guttenberg, a father of a student killed at Marjory Stoneham Douglas High School and founder of Orange Ribbons for Jaime.

“We needed to alert the attorney generals to file an emergency injunction,” Murray said. “We can stop this legislatively later, but right now it is an urgent matter (to withdraw the settlement). Time is ticking.”

Connecticut Against Gun Violence (CAGV) joined the push last week for Jepsen to join the lawsuit effort and keep Connecticut at the forefront of gun control efforts.

“It is too easy to get guns without a background check and too easy for people to have assault weapons,” said Jeremy Stein, executive director of CAGV. “We need to make sure that the internet is not proliferated with plans to build weapons of war.”

Months before this settlement was reached, CAGV was concerned about the proliferation of 3D printed guns, Stein said. During the last legislative session, CAGV raised the Ghost Gun Bill to stress the importance of regulating 3D printed guns and require there to be some metal in the guns, making them detectable.

“We had a lot of support but they decided it was not a priority in Connecticut unfortunately,” Stein said. “Now we are forced to be reactive, instead of proactive.”

Stein added that he hopes Connecticut will follow in the footsteps of Pennsylvania, where an emergency suit forced Defense Distributed to lock out all internet-users in the state from their website and downloadable content.

In addition to the lawsuit, the 21 state Attorney Generals sent a letter to Secretary of State Mike Pompeo and Attorney General Jeff Sessions detailing their concerns and requesting that the settlement be withdrawn.

“I’m hoping it can be stopped by midnight tonight. To do that we need the State Department and the Department of Justice and Donald Trump to work together,” Murray said. “Today I picked up the phone and called the White House and left a message for Donald Trump. We all need to do that.”