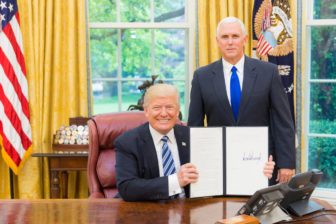 In May of 2017, President Donald Trump established a presidential commission to explore the threat of voter fraud — staffing it with multiple Republicans who had theorized that fraud was a substantial problem in American democracy. The commission, widely called the voter fraud commission, was immediately criticized as a political creation aimed at a phony problem.

In January, Trump disbanded the commission, which by then had produced little if any evidence that voter fraud was a significant menace.

Today, thousands of commission documents were released that show aspects of the body’s inner workings. As critics have suggested, the records — a mix of memos, internal emails and reports — make clear the commission’s work was driven by a small number of members who were convinced voter fraud was widespread, and that other members were often excluded from critical decisions about the commission’s aims and tactics.

The documents were provided to ProPublica by American Oversight — a group that provided legal representation to Maine Secretary of State Matt Dunlap, who had been a Democratic member of the commission. Dunlap has contended that the commission’s leaders left him out of key deliberations, which he was entitled to participate in by law.

The judge ruled that the commission must disclose documentation related to internal deliberations, and the commission did so on July 18. Below is a sampling of some of the noteworthy material in them:

In January, when Trump abruptly dissolved the commission, he claimed that it had “substantial evidence of voter fraud” and that the commission’s “initial findings” would be turned over to the Department of Homeland Security. But the documents released today show there was nothing to support these claims.

On Nov. 18, 2017, Andrew Kossack — the executive director of the commission — circulated a draft “Staff Report” on the commission’s work. The report is a summary of the commission’s efforts, which Kossack appears to have been compiling beginning in August. The draft report included a prewritten section called “Evidence of Election Integrity and Voter Fraud Issues.” The section, with few exceptions, wound up almost entirely blank.

Austin Evers, the executive director of American Oversight, said the lack of material in the section set aside for evidence of fraud or other voting problems “shows that the White House knew, or at least should have known, that it was blatantly lying when they made those claims in January.”

Requests for comment sent to both the White House and Kris Kobach, the former vice-chair of the commission, have not yet been returned.

The only known action taken by the commission during its short life was a letter it sent to all 50 states in late June 2017 requesting copies of publicly available voter rolls, which list registered voters in each state. The letter did not include any details about how the records would be used, and many state officials denied the request.

Today’s documents show the commission worked behind the scenes with Republican Party officials in at least one state to circumvent the decisions of state officials.

John Merrill, the Republican secretary of state for Alabama, had denied the commission access to the state’s voter rolls, saying it violated Alabama law to distribute the data to such an entity.

However, in an email exchange with Kobach, Terry Lathan, the chairman of the Alabama Republican Party, said, “The ALGOP will honor your request and have a full state voter pull for the commission you chair.” Lathan added that the party’s political director would “initiate this process immediately.”

Merrill told ProPublica he was unaware that the state Republican Party had sent the list to the commission. Moreover, he said, the list would have been out of date — perhaps by several months.

After Colorado agreed to send information to the commission, voters there began canceling their voter registrations so that the Trump administration would not have access to their data. At the time, Colorado officials told ProPublica they were not worried — Colorado is a same-day-registration state, so voters could re-register even on the day of the next election in which they wanted to cast a ballot.

But Dick Lamm, a former governor of Colorado, and Roy Beck, the president of NumbersUSA, an organization that advocates for stricter limits on immigration, exchanged emails about the de-registration in the state.

In them, Lamm tells Beck he thinks those who deregistered should be investigated. “I suspect many/most of these were illegals now scared of Trump’s new policies,” he wrote.

Rosemary Jenks, the director of government relations for NumbersUSA, forwarded the exchange to Kobach saying, “Definitely interesting stuff for the Commission to check into, especially since Colorado is cooperating!” The documents do not make clear if such an inquiry was ever begun.

Several secretaries of state — including Merrill — expressed frustration with the commission after receiving the letters requesting voter rolls, responding to the commission with questions about how the data would be used.

The documents show that Kobach initially wanted to tell the states some of what the data might be used for. He wanted to “compare voter rolls to federal databases of known noncitizens residing in the United States to identify ineligible noncitizens who have become registered.”

It was an odd aim, for Kobach, the secretary of state in Kansas, had admitted during litigation in Kansas that such comparisons were not productive or reliable.

The commission ultimately never told the secretaries of state that the data might be used in this way, and took this out of communications to the states at the behest of Vice President Mike Pence’s office.

The vice president’s office did not respond to a request for comment on this matter.

The documents released today also suggest that the commission had intended to ask states for far more information than has been publicly reported.

ProPublica first reported last October that Hans von Spakovsky and J. Christian Adams — two individuals who are closely associated with advocacy for strict laws to prevent voter fraud — provided feedback on the request for state voter rolls behind the scenes before their formal appointment to the commission. The documents now show their specific suggestions.

In addition to the voter roll data, von Spakovsky and Adams jointly recommended the commission ask for a long list of other data from states. Those on the email chain jointly agreed that the first request should be simple, and that additional data could be requested later.

It appears the commission quickly made plans to request some of the additional data the pair had requested, namely jury questionnaires. The documents show that in late June, at the same time the original letter was sent, Kobach and members of the Office of the Vice President had drafted and finalized a letter to send to federal clerks’ offices requesting information on “all individuals determined to be ineligible or who were otherwise excused from federal jury duty” because they had died, moved out of the jurisdiction, had a felony conviction, or were not U.S. citizens. They specifically requested the names of the individuals and their addresses, and the reason they were excused from jury duty, and “other identifying information associated with each individual.”

It is not immediately clear if this letter was sent. The data could have been used to compare against the voter rolls the commission was collecting in an attempt to suss out individuals that remained on the voter rolls after their deaths or a move, or non-citizens who were registered to vote.

In a letter addressed to Pence and Kobach sent today, Dunlap confirmed he had no knowledge of the plan to request this information despite his role as a commissioner. “I have no way of knowing whether these requests were issued or, if not, why not, but Vice Chair Kobach’s and certain commissioners’ cavalier attitude towards vacuuming data is troubling,” he wrote.

This story first appeared Aug. 3, 2018, in ProPublica, a Pulitzer Prize-winning investigative newsroom. Sign up for their newsletter.

With the pandemic upending traditional politics, Hayes is running on her record and Sullivan on the need for change.

CT ViewpointsCT Artpoints
Opinion Giving thanks — and turning 50 — in 2020: Reflections on the decade past