Can we do better? The state’s ongoing search for ways to treat drug addiction

After serving a three-year prison sentence and completing three years of probation, Bridgeport resident William Kelly found himself back in lockup in 2016 on another round of drug charges.

But this time, things were different.

Instead of more jail time, Kelly was offered a spot in the judicial branch’s new Treatment Pathways Program (TPP), and began his path to substance abuse recovery within a day of being arrested.

“At the beginning it was a little rough because I was missing a lot of days of treatment because of my job hours, but I came to realize that this was needed, so I started going way more often,” Kelly said. “Hearing everyone’s struggles (during group sessions) you take a step back and think about yourself and think about what you need to do to succeed.”

Kelly is one of 416 people over the past three years who have been admitted into TPP for substance use disorder, said Michael Hines, assistant director for adult probation and bail services in the Court Support Services Division of the judicial branch. People are admitted to the program immediately following arrest, which means they are not arraigned on charges until they have completed treatment.

The goal of the program, Hines said, is to place individuals suffering from substance use disorder who are motivated to recover into treatment as quickly as possible in the hope that they will avoid incarceration and future arrests.

Many of the individuals who successfully complete TPP have their cases dismissed completely, he said.

“Police and prosecutors have the first opportunity to intervene if they have time,” said Kevin Kane, Chief State’s Attorney and a member of the state’s Opioid Task Force, which met for the first time in late September.

Programs like TPP, that place a social worker directly in the court, allow individuals to be screened for substance use disorder and sent to the appropriate level of treatment immediately, instead of exacerbating their condition through extended jail time.

Kelly had been in treatment before, he said, but TPP was different. This time around he had a peer group and a counselor who not only supported him, but were confident he could succeed. Today, Kelly feels as though his life is back on track.

“I feel good. I’m on the right path. I’m working every day and I’m seeing my family,” Kelly said. “I’m staying out of trouble.”

Individuals who are accepted into TPP are transferred almost immediately into the appropriate level of care – typically within 24 hours – to begin treatment.

“It’s an incredible, wonderful program that helps to divert low-level, non-violent offenders,” said Jennifer E. Kolakowski, the chief executive officer for Recovery Network of Programs, Inc., which runs TPP in Bridgeport. “Our social worker gets referrals from the bond folks based on their criteria. She does a full clinical assessment and then, if they meet our qualifications, offers them the opportunity.”

People who complete the program are less likely to be sentenced to jail time, and repeat arrests occur at a lower rate.  For example, TPP participants are rearrested at a rate of less than 6 percent, compared to a rate greater than 10 percent for individuals not in the program.

“We believe the majority of these folks would have stayed incarcerated but for TPP,” Hines said. “We can’t change them all but, as you’ll see, we did a pretty good job.”

Kelly agrees that not everyone in the program is successful, but said personal motivation is the deciding factor.

“You need to be ready to change your situation, change your environment and change your life around,” Kelly said. “It’s great, but it is hard. You have to want it.”

TPP began in Bridgeport Superior Court in June 2015 with a $100,000 federal grant. It expanded to New London and Torrington in 2017 and, most recently, to Waterbury this past July. The Bridgeport program is now self-funded, while the others are funded through grants.

“Providing real-time access to services and reducing the barriers to treatment gives individuals the best chance of recovery,” said John Simoncelli, a social worker and the executive director of Greenwoods Counseling Referrals in Torrington.

The program has not only helped hundreds of individuals redirect their life, but has saved the state thousands of dollars, proponents said.

“It is an unbelievable savings for the state when individuals aren’t incarcerated,” Kolakowski said. “Instead, they are diverted from incarceration and are receiving treatment, which is what they actually need anyway.”

According to Hines, the TPP program has saved the state 74,933 days of an individual using a bed inside a state corrections facility. This correlates to more than $9.5 million saved, he said.

Others around the country have recognized the success of this program and are interested in implementing it where they live, said Gary Roberge, the executive director of CSSD.

TPP is part of a national shift that places more emphasis on treatment than punishment, said Maria Skinner, executive director of McCall Center for Behavioral Health in Torrington.

“What I’m seeing is a shift in thinking away from the punitive model, where we equate morality with addiction. We are now understanding that this is a disease and we need to treat the root cause of it,” Skinner said. “We need to recognize that for many nonviolent offenders, the crime is related to their addiction. That’s the root cause of their crime. If they are in a program that addresses the root cause, rates of recidivism drop drastically.”

TPP is just one of several programs the state has rolled out in recent years in an attempt to address the opioid epidemic, which claimed 1,038 lives in 2017. The department also contracts with community programs, adult behavioral services, and residential services — depending on the severity of the person’s condition. 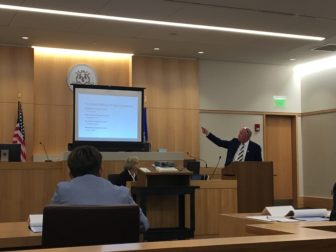 Despite all these efforts, Kane said he and others “have to ask ourselves can we do better?” when it comes to helping those suffering from substance use disorder.

The state’s Opioid Task Force is currently studying the feasibility of establishing opioid intervention courts. Over the next few months, the group is mandated by the state to study whether or not court programs have a roll to play in Connecticut.

Kane explained that these programs can be very beneficial for some people, especially those who are not ready to commit to recovery at the time of arrest as TPP requires. One of the duties of the task force is to determine what type of person would most benefit from an opioid intervention court.

Although expanding services may seem impossible given Connecticut’s current budget problems, state officials and practitioners alike point to how TPP, drug courts, and other similar programs actually save the state money.

“I think there is a worry that a program like this would be expensive, and in the present state of our state budget that makes people nervous,” Skinner said. “But if you look at what we spend on incarceration and what municipalities spend on people who are overdosing, then there is really no match. It is almost always a cost savings.”

But to truly reverse the opioid epidemic, Skinner said, the shift in thinking must continue to permeate throughout our culture, not merely in the health care profession.