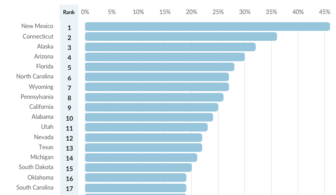 A study of national juvenile incarceration rates by Pew Charitable trusts examined how many youth are detained on minor offenses.

The number of youth incarcerated in the state’s juvenile detention centers for minor offenses dropped significantly between 2015 and 2017, pulling Connecticut from its number two ranking in a national study tracking juvenile confinement.

That study, released last month by Pew Charitable Trust, found there were 51 juveniles detained in Connecticut for technical offenses, such as violating probation orders or failing to show up for treatment, on a single day — Oct. 28 — in 2015.

Specifically, Connecticut placed second for the percentage of its overall juvenile population that was detained for technical offenses on Oct. 28, 2015. The state placed 31st in the nation for the percentage of those in detention for status offenses, which includes truancy, underage drinking and running away from home.

According to the judicial branch, which oversees the state’s juvenile detention centers, there was a 53.2 percent reduction in juveniles detained for technical violations between 2015 and 2017, with 64 total admissions in 2017 compared with 137 in 2015.

Additionally, there was a 36.7 percent overall decrease in the number of juveniles admitted to the detention centers between 2015 and 2017 — a decrease officials say was driven in part by the reduction in youth held for minor offenses.

“The state has made a big change in the law around grounds for detention. Today, public safety and flight risk are the only reasons a child can be locked up on a technical offense,” said Gary Roberge, the executive director for the Court Support Services Division (CSSD) of the Judicial Branch. “I think if Pew did this again now, we would have a different place on this graph here.”

The movement to downsize the incarcerated juvenile population came after data collection by CSSD that showed many detention admissions were for probation violations and follow  recommendations from the Council for Juvenile Correctional Administrators.

“I think Connecticut is very much in line with the recommendations in that report for right sizing the systems to remove status offenders from the system,” said Bill Carbone, the executive director of Justice Programs and the Tow Youth Justice Institute at the University of New Haven. “The whole idea of right-sizing is limiting the contact of kids with the system.”

While the overall number of detained juveniles has decreased, however, “the percentage of kids who are in detention with felony charges pending or adjudicated as a felon already has increased,” said Brian Speary, a data specialist for CSSD.

Reducing contact with the juvenile justice system is the best way to prevent recidivism among young people. In 2015, the Juvenile Justice Policy Oversight Committee (JJPOC) drafted recommendations for community-based diversion programs in order to limit contact with the system as much as possible. The recommendations turned into legislation in 2017, and put the Youth Services Bureau in charge of coordinating diversion efforts between schools, police, families and the child welfare system.

But eliminating detention – at least at this point – for all technical offenses would be almost impossible, according to Roberge.

“I was speaking with the executive director of residential services and she told me that there were seven kids in detention for a technical violation – absconding,” Roberge said. “They won’t stay where they need to be, so what do we do with them?”

According to Carbone, JJPOC will begin studying best practices for juveniles with technical violations, but as of yet the committee has not researched this area.

“This is an area that needs more study,” Carbone said. “We need to find out if we are truly utilizing the system of graduated responses.”

Although reducing detention admissions would likely be beneficial for youth, advocates continue to insist that it is important that these changes are thoroughly planned and funding is provided.

“A kid shouldn’t be in jail for a technical violation of probation, but there should be consequences. What does that look like?” said Abby Anderson, the executive director of the Connecticut Juvenile Justice Alliance.

The closure of the Connecticut Juvenile Training School (CJTS) – an all-male, maximum security facility for youth that was operated by the state Department of Children and Families in Middletown – without thorough planning in July 2018 made Connecticut the first state without a prison for juveniles. However, the closure of CJTS also put those same kids back into detention facilities traditionally meant for pre-adjudicated juveniles only.

As of now, CSSD has yet to release a request for proposal (RFP) for secure, residential facilities that could take the place of detention centers for juveniles needing long-term stays.

“We are currently finalizing [the RFP] here in judicial. It should be completed sometime around the holidays,” Roberge said. “We will get it out to the public by the beginning of 2019.”

At about the same time Pew was conducting its study in 2015, legislators and attorneys representing youth involved in the juvenile justice system began raising questions about DCF’s oversight of CJTS.

These questions accelerated after the number of youth living at CJTS reached a 10-year high as a result of kids being locked up for technical violations. More youth were incarcerated at CJTS for violating their probation than any other offense in 2015. The department was also pushing to open a new locked facility for girls at the time.

Several prominent legislators balked and put pressure on the administration to close the juvenile jail and changed laws to limit when youth can be incarcerated.