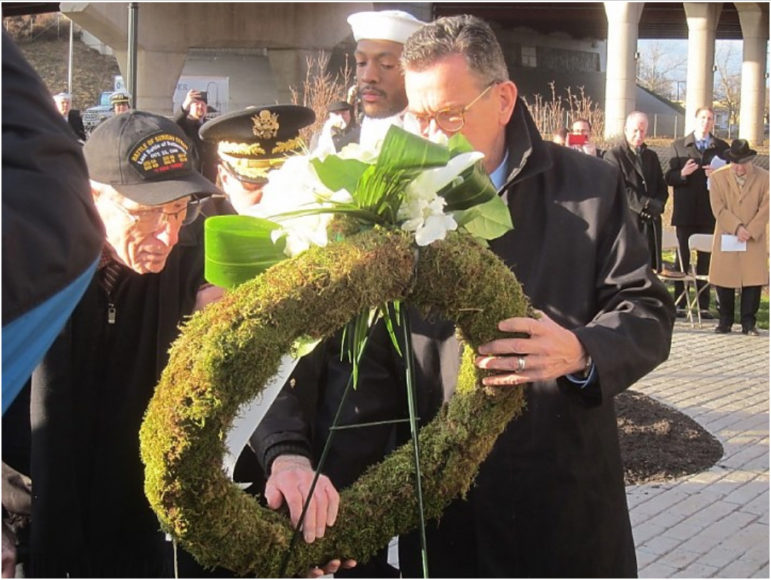 Early on the morning of Dec. 7, 1941, 19-year-old Electrician’s Mate Floyd Welch was pulling together the microphone and other equipment for church services on his ship, the U.S.S. Maryland, anchored, with a sister ship, two by two, along one of the inlets at Pearl Harbor.

Within a half hour of noise, confusion, and alarms, he and his 1,000 shipmates were at battle stations. Where he stood through the smoke on the forecastle, he saw a battleship lying on her side.

Roll the clock ahead 77 years and Welch, a handsome 96-year-old who is the last Connecticut survivor of the attack on Pearl Harbor, was at the center of attention Thursday as state officials dedicated New Haven’s new Pearl Harbor Memorial Park.

The park is a grassy oval with impressive gold-lettered plinth in the shadow of the eponymous bridge on the northeast corner of East and Water Streets.

On a cold, but sun-lit early afternoon, 50 people, many in uniform and many of them vets, gathered on the oval plot of land with a flag at half staff (for President George H.W. Bush). They were surrounded by freshly planted green grass and large squares of granite, which function as chairs.

In remarks by Gov. Dannel P. Malloy, Mayor Toni Harp, and Veterans Affairs Commissioner Thomas Saadi, Welch received thanks for his service to preserve the country’s freedoms from the attack of the Imperial Empire of Japan.

In many ways the event felt like a continuation of the celebration of that spirit animating the funeral rites for the 41st president, who was buried on Wednesday.

Gov. Malloy called the event not only a memorial but an aesthetic celebration as well.

He called attention to the structure’s massive under-supports designed to echo the shape of the smokestacks on vessels such as Welch’s in Pearl Harbor seven decades ago.

The large rectangular-shaped stone at the top of the oval is set at an angle, with gilded lettering.It draws the eye toward the center of the elevated lanes, approaches, and overpasses of the bridge complex to the east. The stone is set off by small evergreen trees on either side. On the south side is a plaque listing the names of the 17 Connecticut service members who died at Pearl Harbor on Dec. 7, 1941.

One of the most moving moments of Thursday’s ceremony was the reading aloud, complete with name, rank, and Connecticut town of origin, of each of those 17 men.

Towards the end of the ceremony Gov. Malloy assisted Welch in placing a wreath beside the plaque.

Also in attendance, sitting beside Welch, was his daughter-in-law Kim Welch. She was joined by Florence Stoeber, the widow of Jack Stoeber, of Milford, a Pearl Harbor vet who did not live long enough to enjoy the ceremonies. 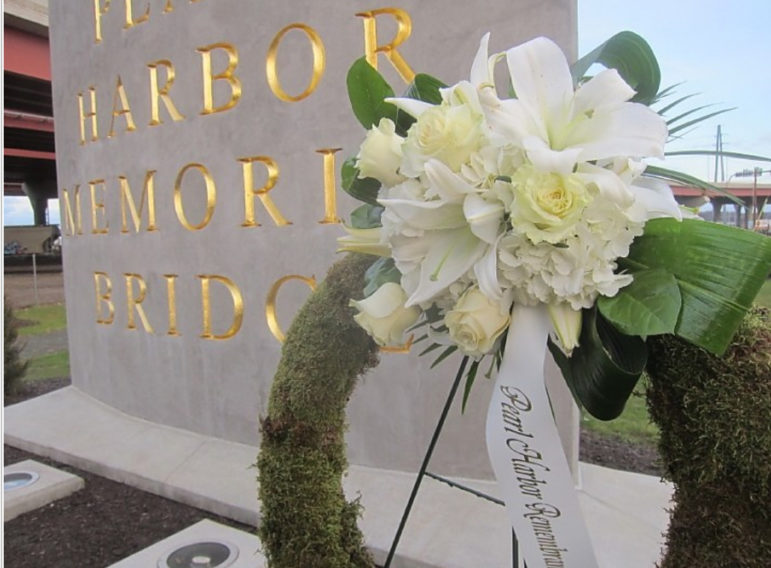 Welch said that Stoeber and other veterans of the attack over the years used to drive over the Pearl Harbor Memorial Bridge in its previous incarnations. First there were seven of them. Then there were three, he recollected. “So far as I know I’m the only one left.”

After the war —  he stayed serving on the U.S. S. Maryland, which survived the attack —  Welch went home to Connecticut, where he worked, among other jobs, as a projectionist at theaters in East Haven. He now lives in East Lyme.

Like many people of his generation, especially those who served in the military, Welch is soft-spoken and modest about his service. He was asked if he harbors regrets or other feelings, including lingering anger at the Japanese. He said simply of the attack on the Dec. 7 morning, “We should have found a way to be at sea to meet them.”

His ship had come in from gunnery practice out at sea the night before. The persistent thought that lingers is that the Japanese could, and should, have been met at sea. “That’s my worst feeling. That nothing was taken care of” in advance], he said.

But that did not mar his enjoyment of the park’s dedication.

Gov. Malloy termed the park “our most beautiful Pearl Harbor memorial in the state.” He and Redeker called attention to the beauty of the bridge and its durability, constructed, Malloy said, to last at least 100 years.