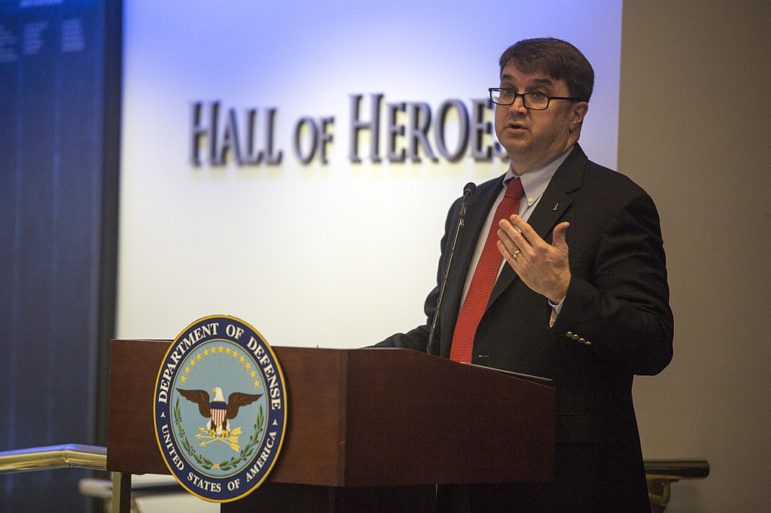 Veterans Affairs Secretary Robert Wilkie has acknowledged that his agency got a bad deal in paying nearly $2 billion in fees to companies responsible for booking veterans with private doctors.

“The department, I admit, was taken advantage of because of the hasty nature that took place when the program was put together,” Wilkie testified at a joint hearing of the House and Senate veterans committees.

Wilkie was responding to lawmakers’ questions about an investigation published this week by ProPublica and PolitiFact into the Veterans Choice Program. The program, which began in 2014, was supposed to give veterans a way around long waits in the VA. But veterans using the Choice Program still had to wait longer than allowed by law. And according to ProPublica and PolitiFact’s analysis of VA data, the two companies hired to run the program took almost $2 billion in fees, or about 24 percent of the companies’ total program expenses.

Wilkie avoided blaming the companies directly, and he instead faulted Congress for giving the VA only three months to launch the program. Asked by Rep. Beto O’Rourke, D-Texas, to specify who took advantage of the VA, he said, “We were forced to take what we could get to implement a law based on the timeline created by that act.”

Wilkie and his deputies who joined him at the hearing said the problems identified in the article occurred in the past and would be addressed when the VA rolls out a permanent replacement for the Choice Program in June. But lawmakers said they’re concerned the VA’s new program, created by a recent law called the Mission Act, could repeat the earlier mistakes on an even larger scale.

“This is why it’s so vitally important that the Mission Act, which will guide future coordination of care, be executed efficiently and thoughtfully,” said the departing House veterans committee chairman, Rep. Phil Roe, R-Tenn. “Are you going to need more time? I’d rather keep doing exactly what we’re doing and implement it a month later than have this thing fall on its face.”

The VA’s acting health chief, Steven L. Lieberman, said the department has made improvements so that the fees are no longer as high as those documented by ProPublica and PolitiFact.

You can read more here about how we did our analysis.

We had asked the VA to respond to our estimates before we published, but an agency spokesman declined to comment. After the hearing, we asked the spokesman again but haven’t heard back. We also spoke with Lieberman directly and asked him to provide his figures; he said he’d consider it.

At the hearing, Lieberman said the administrative costs would decrease when the VA awards new contracts, known as the Community Care Network, to run the permanent program. The VA started accepting bids for those new contracts two years ago but repeatedly missed its deadlines to award them — and it still hasn’t.

Despite the delays, Lieberman said, “We’re really pleased with how our contracting has been going.”

The officials at the hearing said they expect to award the new contracts in February and March, which is already a month later than they were planning as of September. Rep. Elizabeth Esty, D-Conn., noted that the timeline had changed from what officials had previously told lawmakers, and Roe remarked that March would be even less time before the new program starts than the contractors had in 2014.

“That’s less than 90 days from the time this thing goes live,” Roe said. “I remember very well in 2014 the fiasco that occurred there.”

Until the new contracts are in place, the VA is relying on one of the old contractors, TriWest Healthcare Alliance. The VA expanded TriWest’s contract to the entire country in October, despite a criminal investigation of the company for “wire fraud and misused government funds” arising from its work on the Choice Program, according to court records. The company said it’s cooperating with investigators.

Nevertheless, Wilkie expressed support for TriWest. “TriWest is the bridge to the expansion of our program through the Community Care Networks, and I am confident that given the governance structure that we have in place that we will be able to reach reach those goals,” he said. “I will also say that if at any time I don’t think we can, I will be up here posthaste to make sure that that we inform the Congress of that contingency.”

TriWest said in a statement that it has worked closely with the VA to improve the Choice program. TriWest did not dispute ProPublica and PolitiFact’s estimated overhead rate, which used total costs, but suggested an alternate calculation, using an average cost, that yielded a rate of 13 percent to 15 percent.

Sen. Jon Tester of Montana, the ranking Democrat on the Senate veterans committee, raised alarm about how the administrative fees could swell even more as the VA expands private care under the Mission Act.

“Extrapolate this out a little bit,” Tester said. “If it costs more to be in the private sector, if admin costs are higher, benefits are going to be cut.”

Tester accused the VA of defying Congress’ intent by using the Mission Act to dramatically expand the number of veterans going to the private sector. As ProPublica previously reported, President Donald Trump is planning to use his State of the Union address to unveil new criteria for shifting veterans to private doctors. Tester complained that VA officials wouldn’t present their plans in writing and quoted cost estimates that varied considerably between briefings.

“Some of the VA estimates indicate the costs will be less than what we spent on Choice but would make a greater percentage of veterans eligible for community care referrals,” Tester said. “That doesn’t make sense.”

Lawmakers from both parties including Sen. John Boozman, R-Ark., and Rep. Mark Takano, D-Calif. — pressed Wilkie on the budget impact of making more veterans eligible for private care. Wilkie resisted their requests to discuss his plans until they’re approved by the White House.

“Senator, I expect to be up here as soon as the president approves the recommendations that I give him,” Wilkie told Boozman.

Democrats warned that the combination of high administrative costs and wider eligibility for private care will lead to starving the VA’s own hospitals.

“My ongoing concern, and this article demonstrates that, is that we are in the process of dismembering the VA — taking resources away from the VA, putting it into the private sector,” Sen. Bernie Sanders, I-Vt., said as he entered ProPublica and PolitiFact’s article into the official record. “I fear this is nothing short of a steady march toward the privatization of the VA. … It’s going to happen piece by piece by piece until over a period of time there’s not much in the VA to provide the quality care that our veterans deserve.”

Takano, who will become chairman of the House panel in January, vowed to keep a close watch on this issue. “If VA fails to implement these access standards properly, or if VA makes them too broad, then the number of veterans receiving expensive private health care in the community will increase exponentially, undermining veterans’ health care and creating an unsustainable strain on VA resources,” he said in a statement after the hearing. “We cannot allow that to happen. VA must get this right the first time.”

Takano also told Wilkie that he expects the VA to provide more information about the trio of Trump associates at the president’s Mar-a-Lago resort who ProPublica revealed were exerting extensive sway on the department.

“We also need to know more about the reported outsized influence a group of advisers may have had on your decisions,” he said. “VA should not be subject to outside influence or the whims of individuals or interests who cannot be held accountable and who did not have veterans’ best interests in mind.”