As goes voting in Maine, so goes Connecticut? 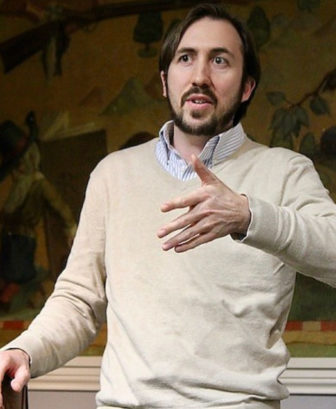 A quest was hatched in the bowels of New Haven’s downtown library to Make Democracy Great Again — by changing how Connecticut votes.

Some 50 Democrats, independents, Greens and Working Family Party members showed up for a meeting about launching a statewide campaign to bring “ranked-choice voting” (RCV) to Connecticut.

For the uninitiated, RCV is an umbrella term for systems that allow voters to choose from a list of candidates. Voters note their preferences for each candidate on a ballot, in ranked order. That way their preferred candidate gets the most votes. If no one gets a majority of the votes, the candidate with the fewest votes gets knocked off the ballot. A second round of counting ensues, with the same process, until a single candidate is left standing and declared the winner.

Advocates argue that under that system — already adopted in Maine and some cities around the country — voters don’t feel a need to choose the “lesser of evils.” And candidates, who need second or third-choice votes, feel less of a need to attack opponents and instead focus on issues.

Those gathered for the late-December meeting at the library argued the current system of “winner takes all” elections is simply not working. They came from all over the state and as far away as Massachusetts to hear from Adam Friedman. Friedman is the executive director of Voter Choice Massachusetts, a nonprofit that has organized aggressively to get its lawmakers to either institute RCV through legislative measures or to put it on the ballot in that state in 2020.

Friedman’s message? Follow the North Star that is the state of Maine.

“I guess the gambit that we’re playing with is because of what happened in Maine, it creates a kind of sea change in American political culture for this issue,” he said.

Maine passed a ballot measure back in 2016 to use RCV for federal elections. Voters in that state got to use the system this year to elect their next U.S. representative. (Read here about the controversy that has erupted over the results.)

Friedman said prior to Maine adopting ranked-choice for federal elections, efforts to change how Americans vote were confined to local elections. RCV is currently used in 11 American cities including San Franciso, Oakland, and Minneapolis. He said it would take “a couple of centuries for that to actually have a national impact” without state-level adoptions. Maine’s success can become Massachusetts and Connecticut’s success if believers in the power of RCV are ready, he said.

“If we don’t have the activist infrastructure to capitalize on it and get enactment campaigns going, we’re going to miss that opportunity,” he said.

Voter Choice Massachusetts has spent two years creating a list of supporters with over 4,000 volunteers and 1,100 donors who have raised a half-million dollars. Trained speakers talk to every state lawmaker in Massachusetts about RCV and secure endorsements for a bill or a ballot measure. Voter Choice so far has the support of 47 out of 200 lawmakers, Friedman reported.

“Each state has its own unique political culture, so we’re not here to impose the political strategy on Connecticut,” Friedman said. “We’re here to just help to teach a little bit of what we know. You guys can take it or leave whatever you need and create some kind of structure that is sustainable. And just away you go and make it happen.”

Part of that the organizing will involve explaining RCV to people who already think it’s complicated. Friedman asked how many people in the room work in STEM fields. Many of the hands in the room went up.

“There are so many good punchy things that anyone who participates in politics in America can get behind on this issue,” he said. “And some of the mistakes that have been made is that the advocates who often hail from engineering, math, science, tech spaces conflate that good stuff with ‘I’m fascinated by the platonic beauty of how this algorithm works.’ And everyone is like, ‘I don’t know what you’re talking about.’”

Hamden State Rep. Josh Elliott, who introduced RCV legislation back in 2017 that he said got no traction, attested to the attention span of lawmakers.

“If it takes more than five minutes to explain forget it,” he said. His bill didn’t even get a public hearing that year. Elliott said it was valuable to have people in the room like Prospect Hill/Newhallville Alder Steve Winter. Winter spent time up in Hartford on behalf of the National Popular Vote, the compact that pledges the state’s electoral votes to the presidential candidate who wins the popular vote. Gov. Dannell P. Malloy signed that legislation back in May; it takes effect if enough states join that compact to represent a majority of electoral votes.

“You’ve got to make that pitch immediately in a couple of sentences,” Winter said. “So having one new concept is enough for a year or two for a lot of these folks.” 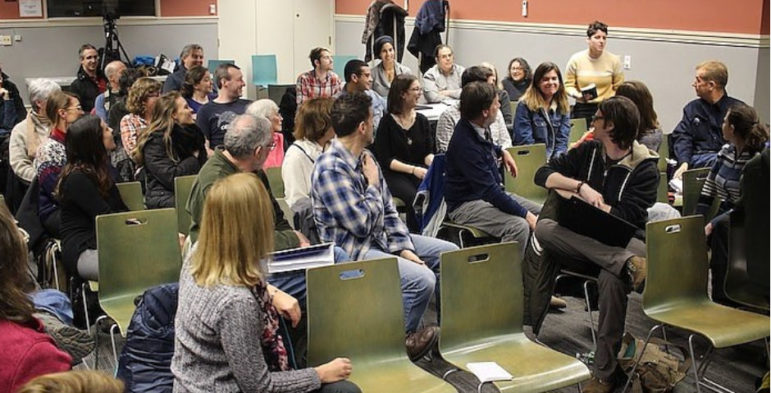 Some of the people listening to the presentation on ranked choice voting.

Elliott said he was heartened to see so many people show up to start organizing for RCV. It lets him know that there is some momentum in the state, he said.

Friedman urged attendees to stick to the message of the problems that RCV could solve, like tamping down on negative campaigning. Leave the love for algorithms for later.

“The argument that it’s too complicated is good for us because it’s an easy argument for us to knock out,” he said. “Because they’ve never seen a new way to vote, it immediately seems more complicated.

“But a better argument is, ‘Don’t listen to me. Look at the data. Look at voter behavior around the country that have used this,” he added. “Eighty-seven percent of voters in Maine’s first statewide ranked choice primary used the rankings. The secretary of state had predicted less than 50 percent would use the rankings. He was off by a pretty massive amount, and he’s supposed to be the head brain on elections and voter behavior. In Minneapolis, 95 percent found the ballot to be easy and intuitive to use.”

In a room full of lefties, someone asked what the outlook is for getting conservatives to support RCV. Friedman’s answer: better than you might think. RCV has about 60 percent support with Democrats, while roughly 40 percent of Republicans support it, he said. Friedman cheekily said ranked-choice voting might have made a little bit of difference in the who ended up being Connecticut’s Republican candidate for governor (in a five-way primary).

Someone asked what the probabilities were that RCV would have produced a different governor. “The tragic thing about trying to second-guess elections,” someone from the back responded for Friedman, “is that we never bother to ask people what their second choice is.”