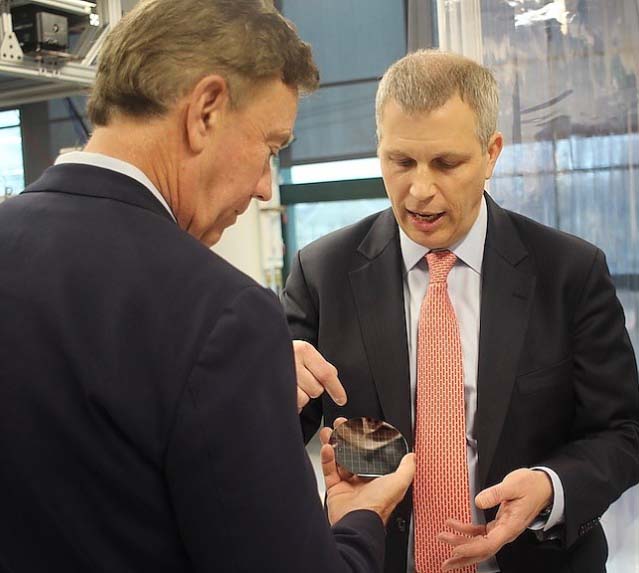 The quest to develop the supercomputers of the future is now taking place in part at the corner of Winchester and Munson in New Haven, where a Yale-connected tech start-up formally has launched a new lab.

The start-up is called Quantum Circuits Inc. On Thursday, Quantum co-founder and Chief Scientist Robert Schoelkopf was joined by Gov. Ned Lamont, venture capitalist Dan Ciporin, and Yale University Vice Provost for Research Peter Schiffer, to cut the ribbon on a new state-of-the-art lab that will serve as development, testing, and in-house manufacturing facility for the four-year-old start-up.

The company is among the leading groups in the world developing quantum computers, the next generation of super-fast machines for, say, helping researchers discover new drugs, design new tools for fintech or security, or “all the things [supercomputers] are good at,” as Schoelkopf put it.

“It’s a very exciting time for us as we’re celebrating a new phase for QCI here in New Haven,” Schoelkopf, who also is the Sterling professor of applied physics and physics at Yale, said during the ribbon-cutting ceremony for the lab on the second floor of 25 Science Park at Yale.

He said the opening of the lab, which will support 20 scientists and engineers with 6,000 square feet of space, comes at an auspicious time in history for the field of quantum information science.

“We’re kind of really at a tipping point,” Schoelkopf said. “It’s the birth of a brand new technology and the onset of commercialization and taking sort of fundamental scientific knowledge into practice.”

The company expects to grow in the space and add more jobs.

The technology used by QCI was pioneered by Yale scientists like Schoelkopf and his co-founders Luigi Frunzio and Michel Devoret.

Schoelkopf said quantum computers will be able to help biologists avoid tedious trial and error to figure out things like whether a particular molecule could produce a new drug, for instance.

“With a quantum computer, we can just design it and explore a whole host of possibilities beforehand and sort of cut the corner on all the actual chemistry,” he said. That means finding solutions, creating products and commercializing those products can happen faster.

The field has become so promising that outside the U.S. countries are making big research and development investments to the tune of an estimated $10 billion to $20 billion in China and $1.2 billion over the next 10 years in the European Union. President Donald Trump has also authorized an investment of $1.2 billion over the next five years. QCI expects that public and private spending on R&D will increase by double-digit rates in the next few years.

Companies around the world are building on work first done by QCI’s founders performing quantum algorithms and quantum error corrections in integrated circuits.

“Here at QCI, we are … focusing on system engineering the sort of discovery of the programming and how you use these machines for real application and also on making devices more reliable, more manufacturable and the like,” Schoelkopf said. “We have a lot of people betting on this basic technology. We’re really excited. We expect to be fielding our first systems this year so that we can start to address at the early stage some of those problems that I listed before from biopharma to a whole host of other industries and sort of cracking open this new era of the information age.”

Gov. Ned Lamont said quantum information science and quantum computing can help propel Connecticut back to the forefront of innovation and entrepreneurship.

“We were the most entrepreneurial, innovative state in the country going back a few generations,” he said at Thursday’s event. “In the last generation or two, we missed a beat when it comes to computer science and the next generation to propel our greater economy going forward. That’s changing.

“This is not sci-fi, not The Jetsons. When Sequoia leaves Silicon Valley and comes to Yale, comes to New Haven and invests here, they know this is where the future is.”

“This is not something that’s pie-in-the-sky,” Lamont added. “It’s something that will be able to be commercialized in the relatively near term.”

“The fact that the world’s first quantum computer is going to be made in Connecticut makes me incredibly proud,” said U.S. Sen. Chris Murphy in a press release, “and it speaks volumes about the unmatched talent of our workforce and the groundbreaking research being done at our universities.”

Just two years ago QCI secured $18 million in venture capital from Canaan Partners and Sequoia, to build and sell the first practical and useful quantum computers, a big deal in the field where bigger players with deeper pockets like IBM Corp., Microsoft Corp., and Intel Corp. are hard at work doing the same.

Canaan Partners’ Dan Ciporin was on hand for Thursday’s ceremony. He said that he and his partners were convinced that QCI was the right company and the right team “at the forefront of the most exciting paradigm shifts of the 21st century.” He also said he believes that QCI has the team that is in the best position to commercialize what comes out of its new lab.

“We’re thrilled to invest in QCI, Rob and his team and to continue to invest in technology and innovation,” he said. Canaan Partners was founded in Connecticut as a spin-off of GE Ventures. Ciporin said that he believes that Ned Lamont is the right leader to take the state where the technology sector wants to go and that he will spearhead policies that will bring jobs and innovation to the state.

“The research problems of today are going to affect humanity,” he said. “Quantum science is a particularly interesting and important topic for Yale and the world.”

Schiffer said that means that there is a tremendous possibility for new types of computers that will solve different problems faster, more efficiently and lead to the development of new technologies. He called QCI a case study for how Yale faculty members have been able to go from ideation to a company that hires people and ultimately ends up producing products and “technology that is going to impact lives.”

“The story of QCI illustrates the potential to leverage university research to create jobs and to drive a competitive, high tech economy,” Schiffer said. “We are excited to be here today about the great success story coming out of Yale. The future for quantum information science is bright.”

This story was first published in the New Haven Independent.