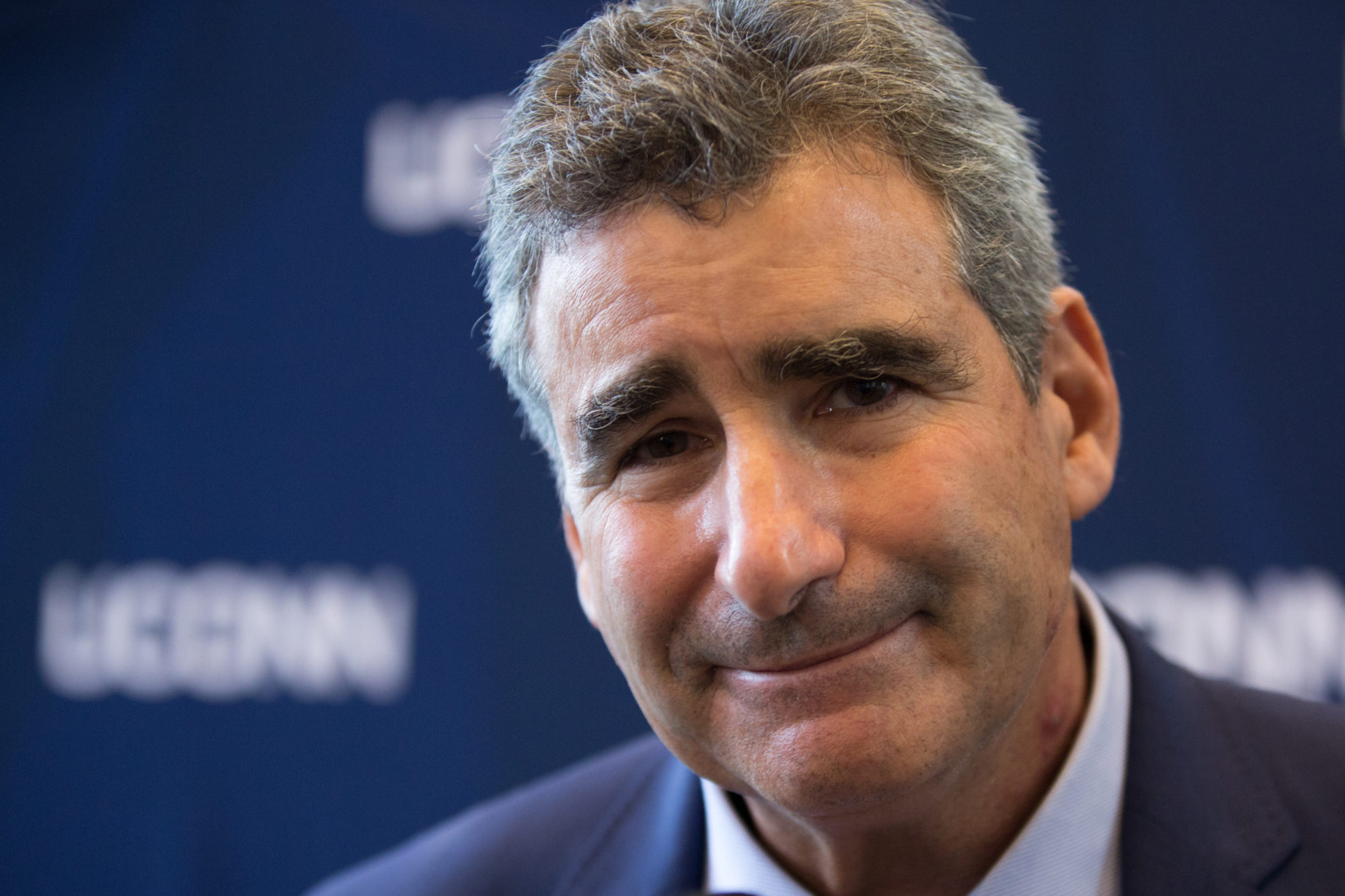 With a unanimous vote Tuesday morning, the University of Connecticut Board of Trustees appointed Thomas C. Katsouleas as the university’s 16th president.

Katsouleas, currently provost and executive vice president of the University of Virginia, said he was “honored and humbled” to be appointed. He will take office Aug. 1.

“I wish to thank you for placing your confidence in me. I will spend each and every day working to justify the confidence and meet your expectations in the years ahead,” he said.

Katsouleas was appointed with the endorsement of Gov. Ned Lamont, who said that he looks forward to working with Katsouleas and  “ensuring that the university and our state’s economic development team, large corporations, small businesses and start-ups alike are working together to help develop a pipeline of talent and an environment that supports business development and economic growth.”

Katsouleas was among more than 215 applicants for the position, which President Susan Herbst is leaving this summer when her contract ends after eight years in the job.

“I’ve been fortunate enough to serve at major universities from coast to coast,” Katsouleas said, “from California to Virginia, both public and private.”

Katsouleas ‘s base pay will be $525,000 with a $50,000 performance-based incentive and $75,000 in annual deferred compensation at the end of each year. In addition, he will have housing at Oak Hill, the president’s house, access to the university’s house on Scarborough Street in Hartford,  and a car allowance of $15,000. He’ll also receive $125,000 in a deferred payment after five years and an annual automatic increase  in his base pay of 3 percent each year.

That’s less than the current president, Susan Herbst, who served as president for eight years, is earning. She is eligible to earn a maximum of $899,967 this year, including a possible $40,000 bonus. Her base pay this year is $691,927.

Herbst’s contract ends June 30 but she has agreed to stay on until Aug. 1, when Katsouleas will take office. Katsouleas plans to spend a significant amount of time in Connecticut in the coming months, the university said, preparing for the job and working with Herbst to ensure a smooth transition.

The trustees voiced strong support for Katsouleas before voting.

” UConn has gotten a great catch,” said UConn trustee Philip Rubin, “with just the type of experience and demeanor that are needed.”

Trustee Shari Cantor said Katsouleas is “approachable and friendly … He has demonstrated his ability to connect with students .. He is a relationship builder and is looking forward to working with donors and helping UConn to continue its extraordinary success.”

Katsouleas said Tuesday that he plans to focus on supporting innovation, enhancing the university’s connections with alumni and philanthropic supporters, and capitalizing on the state’s investments to aggressively expand UConn’s impact on the economy and and innovation.

“The UConn story and its rise over recent decades is well known in higher education across the country,” Katsouleas said. “Over a 20-year period, it has arguably been the fastest-rising public university in the nation, particularly in undergraduate rankings.”

He called it a “remarkable story and the envy of so many other states.”

One of the main reasons he was drawn to Connecticut, Katsouleas said, is because he believes there is a “strong bipartisan consensus among many of the state’s elected leaders, including Governor Lamont, that higher education is extremely important to Connecticut and its future and it’s worth investing in.”

UConn has weathered significant cutbacks in state funding in recent years because of the state’s fiscal crisis, but Katsouleas said he believes those reductions “are the result of budget necessity, not ideology, and that’s an important distinction.”

Katsouleas said it will be important for him to ensure the university’s priorities are aligned with priorities of the state.

He noted that in a Jan. 28 meeting with Lamont and state business leaders he learned how important UConn is to feeding the state’s supply of engineers. He said many of the business leaders told him that more than half of their workforces were UConn grads.

One of his top priorities, Katsouleas said, is growing research at UConn. He has set a goal of doubling research dollars at the university over the next seven to 10 years, from the current $265 million to $500 million.

“So, I have a sound bite for you,” Katsouleas said. “We are two-thirds the size of Michigan, but only one third of their research (budget). It’s in that context we really need to double.” 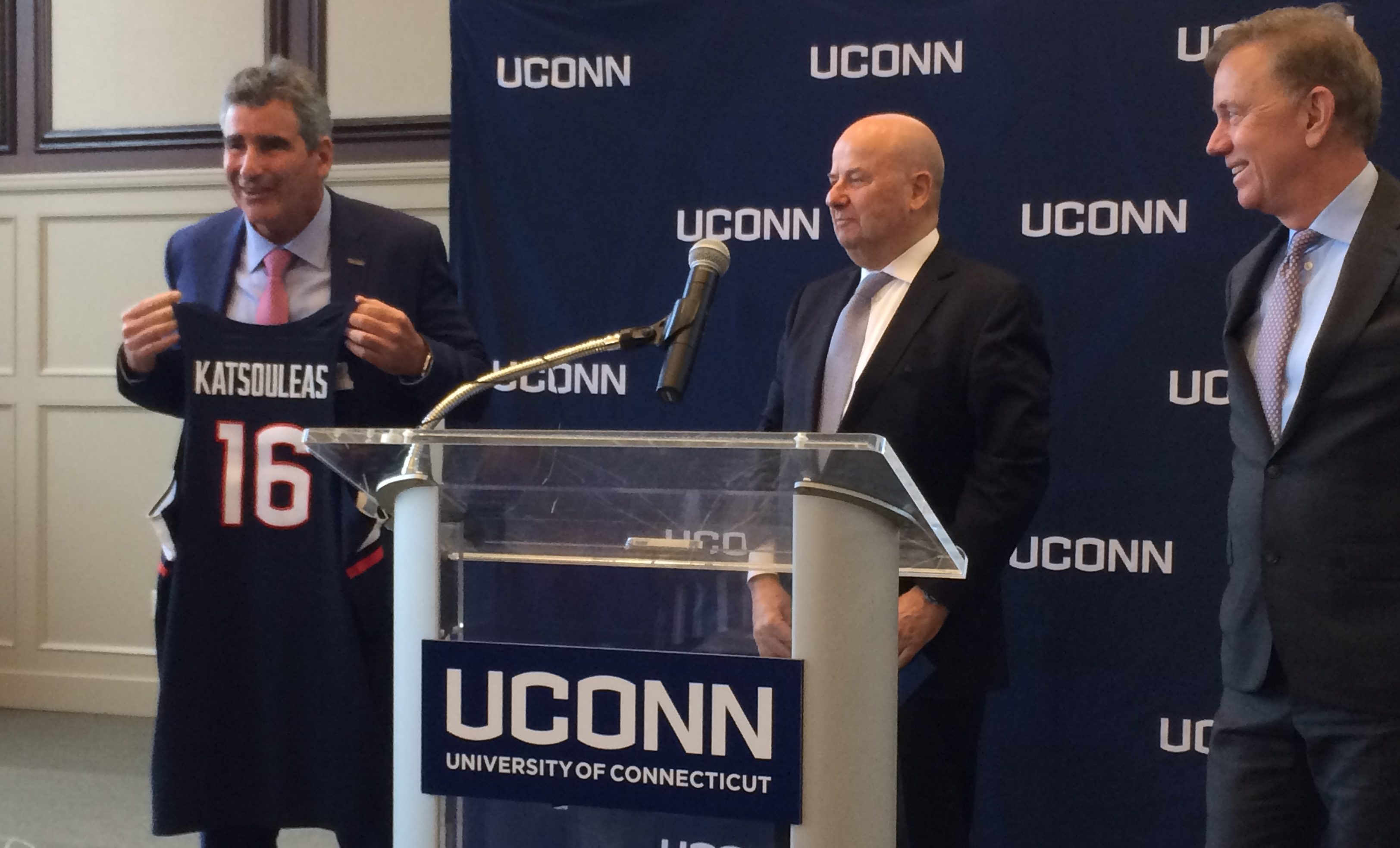 Katsouleas said that “research and vibrant communities are linked. It is hard to think of a part of the country that is home to a vibrant economy that does not include at least one major university underpinning that vibrancy.”

But, he added, great flagship universities do even more.

“They are about uplifting the mind and the spirit, the quality of life, the opportunity for students and everyone beyond,” Katsouleas said. “So I aspire to much more than simply just a bottom line economic number, but certainly we can play a big role, I think, in helping the state’s economy.”

Katsouleas also said he expects to spend a lot of time working with the UConn Foundation, the university’s fundraising arm.

“I expect I will make some audacious asks,” Katsouleas said. “So if I ask you for coffee, it may be an expensive cup.”

But Katsouleas emphasized that students are at the center of his mission and said he expects to have regular office hours with them at a local coffee shop where he will be doing the buying.   “Take me up on the coffee offer, OK?” he said to a student.

Ama Appiah, a UConn senior who is president of the undergraduate student body and served on the advisory search committee, said she is particularly pleased that Katsouleas is “passionate about providing support to students in the transition from undergraduate years to the postgraduate years.”

“He seems like a very personable person,” said Appiah. “I think that’s something we’ve loved seeing in Susan Herbst. I’m glad to see that will be continued in the coming year. I know students, because of that, will receive him well.”

Tom Bontly, a faculty member in the philosophy department and president of the UConn chapter of the American Association of University Professors, said the new president looks like “a good hire for us and like a good fit for UConn’s needs. He comes with excellent academic credentials, which is important if you want to lead a major research university.”

Katsouleas’ departure from UVA had been planned since shortly after the president who hired him, Teresa A. Sullivan, announced her intention in 2017 to resign.

In a biography online at UVa, he says, ”My research uses plasmas and lasers to miniaturize particle accelerators, the world’s largest engineered devices, for applications from discovering new forms of matter and energy to beam therapy for tumors and novel imaging tools.”

Katsouleas was one of three publicly identified finalists last year for president of the University of Utah, a school with a search process more public than UConn’s. The university’s search committee worked in confidence and did not identify either of the two finalists interviewed by Lamont the weekend after he took office on Jan. 9.

Lamont was initially noncommittal about the candidate, but invited Katsouleas back for an unusual vetting session with prominent business leaders on Jan. 28 to talk about the new governor’s desire for UConn to take a stronger role in driving economic growth in Connecticut.

During a short news conference with reporters following the trustee vote, Katsouleas was asked if he is committed to keeping a Division 1 football program.

“Yes, I’m committed to football,” he said. “I think it’s part of the identity of who we are as a broad context university and I don’t think the savings from cutting it are as great as people think. It has ancillary value for the other sports and for fundraising overall.”

He also said that UConn is in a good athletic conference. “We’re committed to building that conference up.”

On tuition, he said there’s been a national trend toward shifting the cost of public education from the taxpayer to parents. “We need to do all we can to strengthen the social contract between the taxpayer and the public university,” he said, “so that shift doesn’t continue.”

He said any tuition increase would be a “last resort.”

Katsouleas grew up in southern California where he was a surfer, a sailor, and a lifeguard who loved “anything to do with water,” he said in an interview with UVA’s alumni magazine.

He has two children who live in California, but Katsouleas said they will be spending their vacations in Connecticut. His oldest child, a high school junior, is looking at colleges, he said, and will include UConn on the list.