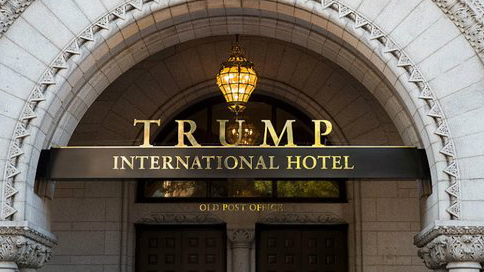 A spokesman confirmed that the nonprofit 58th Presidential Inaugural Committee paid the Trump International Hotel a rate of $175,000 per day for event space — in spite of internal objections at the time that the rate was far too high. If the committee is deemed by auditors or prosecutors to have paid an above-market rate, that could violate tax laws prohibiting self-dealing, according to experts.

Tax law prohibits nonprofits from paying inflated prices to entities that are owned by people who also control or influence the nonprofit’s activities.

“Every legitimate nonprofit is very concerned with this,” said Doug White, a veteran adviser to tax exempt organizations, speaking generally. “You’re benefiting a private person, and you’re using the nonprofit to do it.”

The inaugural committee also spent at least $1.5 million at a hotel in which the investment firm of the committee’s chairman, Tom Barrack, held a small stake.

In addition, the inaugural nonprofit appears not to have disclosed multiple gifts to the committee on its tax return, as required by law.

Trump’s inaugural committee spent more than $100 million, almost twice the amount spent on the next-most expensive inaugural party, that of Barack Obama in 2009. In addition to probing how the nonprofit spent its money, investigators are examining whether the inaugural received improper donations from foreigners. Inaugural nonprofits are prohibited from receiving donations from people who are not U.S. citizens.

The committee paid a total of $700,000 to the Trump International Hotel for event spaces for four days in January 2017. At the time, a consultant working for the inaugural committee expressed her concern over email that the price quoted by the Trump hotel — $175,000 per day for several event spaces — was too high, as ProPublica and WNYC reported in December.

“Please take into consideration that when this is audited it will become public knowledge,” wrote Stephanie Winston Wolkoff, an experienced New York-based event planner, suggesting a fair rate for the event spaces would be at most $85,000 per day, less than half of what was ultimately paid. That fee did not cover catering.

Ari Krupkin, an event planner at the Markham Group in Washington, said event space rentals typically come as part of a package that includes catering and audio-visual. Without those services included in the price, he said, “$175,000 a day seems more than egregious.”

It could become a criminal violation, Kappel said, if investigators uncover evidence that people knew that charging above-market rates to enrich the Trump Organization was illegal and did it anyway.

A question on the mandatory nonprofit tax return, Form 990, asks whether the organization engaged in any excess benefit transactions. The inaugural committee checked the “No” box.

The inaugural committee’s tax return states that it had a written conflict-of-interest policy, but the spokesman declined to provide the policy to reporters. Atchley & Associates, the Texas firm that prepared the tax form, did not respond to requests for comment.

The inaugural committee has said that overall, for the event spaces and other expenses, it paid more than $1.5 million to the Trump hotel, as first reported by ABC and The New York Times.

Ivanka Trump, the president’s daughter and an executive at the Trump Organization at the time, was on the email chain about the Trump hotel event. She connected Rick Gates, the inaugural committee’s deputy chairman, with a hotel executive when Gates was seeking a price quote for the ballroom. Ivanka Trump’s spokesman in December said she only passed on the note and said that the inaugural should pay a “market rate.” Her spokesman did not respond to inquiries for this story.

In her email, Wolkoff, who was a friend of Melania Trump’s, pointed out that since other venues were donating their spaces, the Trump hotel’s rate was particularly troubling. The company that runs events at Union Station, the site for the inaugural’s candlelight dinner, donated the iconic space, according to a contract obtained by WNYC and ProPublica. Barrack’s own wine was also on the menu at the Chairman’s Global Dinner, an exclusive inauguration week event hosted by Barrack. “It was my honor to have donated wine from my personal vineyard, completely free of charge,” Barrack told Vinepair.

The Union Station donation and the wine do not appear to be included on the inaugural committee’s tax return, which is supposed to report non-cash contributions. The committee spokesman declined to answer detailed questions about the omission and other issues.

In addition, the inaugural spent money at a hotel then partly owned by the investment firm of Barrack, the businessman and friend of Donald Trump’s who chaired the inaugural committee. The committee has said it spent at least $1.5 million at the Fairmont, a Washington hotel owned by the conglomerate AccorHotels. Barrack’s investment firm Colony Capital owned a roughly 5 percent stake in AccorHotels at the time of the inaugural, which it sold soon after. AccorHotels is run by a longtime former Colony executive. The inaugural spent as much or more at the Fairmont as it did at at the Trump International, the Times reported.

The White House and the Trump Organization did not respond to requests for comment. White House press secretary Sarah Huckabee Sanders said this week that the subpoena to the inaugural committee “has nothing to do with the White House.”

This week, ProPublica and WNYC reported that Barrack’s firm developed a plan after the inaugural to profit from its close ties with Trump and the incoming administration.

This story was first reported Feb. 8, 2019, by ProPublica, a Pulitzer Prize-winning investigative newsroom. Sign up for The Big Story newsletter to receive stories like this one in your inbox.