Gov. Lamont drops “redistricting” from controversial bill to get schools to share services

Gov. Ned Lamont has recast his proposal encouraging school districts to share services, eliminating some of the words — like “redistricting” and “consolidation” — that prompted widespread controversy and protest.

Lamont said he understands the concerns of many constituents who object to forced consolidation and is hopeful the changes he made to his proposal address those concerns, according to a statement from his office.

At a legislative hearing before the Planning and Development Committee where the bill came up as part of a broader discussion Wednesday, however, some residents and others expressed relief about the revisions while others said they still could not support the governor’s plan.

The bill, Senate Bill 874, calls for the establishment of a Commission on Shared School Services. Originally, the bill said the commission would be established to develop “a plan for redistricting or consolidation of school services and school districts.”

“The truth is that our students and teachers are not getting the adequate resources they need in the classroom.”

The revised bill not only eliminates the words redistricting and consolidation, but also replaces “plan” with “recommendations” as a way to emphasize the advisory nature of the commission’s report. It says that the commission “shall develop recommendations in accordance with provisions.”

Lamont’s bill still contains some controversial sections, however, including one that requires small districts — defined as districts with fewer than 10,000 residents, fewer than 2,000 students or with only one or two schools — to share a superintendent with another district or name a chief executive officer to oversee the schools. If such a district chooses instead to maintain their own superintendent without sharing, Lamont’s proposal says, the commissioner of education may withhold funding in an amount equal to the superintendent’s salary.

He said the elimination of the words “redistricting” and “consolidation” is “beneficial toward working together to create a better system in the state of Connecticut. It has to be one step at a time and we’re very happy that the governor’s office is willing to listen.”

But Caroline Ungar, a Wilton resident who attended the hearing, said she and her husband moved to the Fairfield County town because of the excellent schools, but now they are wondering whether they made a “colossally bad decision.”

“The different perspectives we are hearing on the bill… are leading to what I would say is a pretty pervasive perception that Hartford’s out to get Fairfield County schools and residents, and that’s having an impact,” Ungar said. “That’s perception and I know perception matters. Perception drives decision-making.”

“The different perspectives we are hearing on the bill… are leading to what I would say is a pretty pervasive perception that Hartford’s out to get Fairfield County schools and residents, and that’s having an impact.”

Lamont continued Wednesday to defend  the need for shared services, however.

“The truth is that our students and teachers are not getting the adequate resources they need in the classroom,” Lamont said.  “Sharing certain back-office administrative services and purchasing costs is more efficient for certain schools, and my bill is intended to highlight and incentivize those efficiencies.”

Jonathan Harris, undersecretary for the state’s  Intergovernmental Policy and Planning Division, said that finding a way to implement shared services “has been a learning process for all of us.”

“There was some controversy over Senate Bill 874. We totally understand that,” he said, adding that the governor’s bill was “always intended to be more of a platform for study and recommendations, but under some strict timeframes so we get it done.” 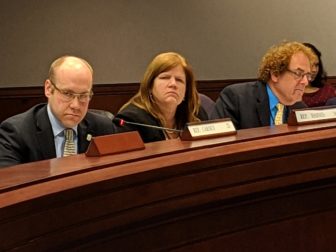 He said the use of words “like redistricting, consolidation” were tied in many ways to “some other more draconian proposals out there.” Harris was referring to school regionalization bills proposed by Sen. President Pro Tem Martin Looney, D-New Haven, and another by Sen. Majority Leader Bob Duff, D-Norwalk, and Sen. Cathy Osten, D-Sprague.

Because the bills proposed by Looney, Duff and Osten were not drafted by March 15, both bills are now dead.

Rep. Devin Carney, R-Lyme, a member of the Planning and Development Committee, said he still opposes the governor’s  bill because he’s unclear about what the “endgame” is for the Commission on Shared School Services.

Harris said there is “no specific endgame.”

Instead, he said, the revised bill “pulls out any words that might make someone think there’s an endgame because not only do we not know all of the answers … but in addition to that, there’s really not a one-size fits all answer in the state of Connecticut.”

He said he expects there will be a “patchwork of different ways” that Connecticut can reach the goal of being more efficient and effective.

Carney said he is also concerned that the commission Lamont is proposing includes only one parent. The revised bill does specify that the governor’s six appointments to the commission must come from one of each of the six Regional Education Service Center districts.

Harris said he thinks there would be willingness to discuss who should serve on the commission.

Betsy Gara, executive director of the Connecticut Council of Small Towns, said the “redrafted proposal focuses on assisting school districts and towns to explore options to collaborate and share services in ways that will produce cost savings and enhance the quality of education.”

Gara said her organization “fully supports the initiative, which encourages towns and school districts to work together to pursue regional, shared services approaches that make sense for their community and for their students.”