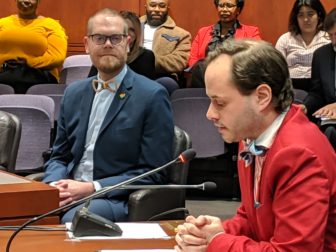 Patrick J. Dunn, executive director of the New Haven Pride Center, speaks in favor of a bill that would establish a health and human services network for the LGBTQ community. Rep. Jeff Currey, at left, co-introduced the bill.

Almost six months ago, Patrick J. Dunn, executive director of the New Haven Pride Center, got a call from a 16-year-old who had just come out as gay to his family.

The young man said his parents’ response was to inform him that while he was allowed to come home to sleep, he wasn’t allowed to eat at home anymore and could never be in the house when anyone else was awake.

“Sixteen — he called the center looking for food because he had been sleeping on the street for two days, ” Dunn said. “This is a reality of our state.”

Dunn recounted the young man’s story as part of his testimony Thursday before the legislature’s Human Services Committee on a bill establishing a Lesbian, Gay, Bisexual, Transgender and Queer Health and Human Services Network. The purpose of the network is to make recommendations to the state about how to “work toward a safer and healthier environment for the LGBTQ community.”

The bill also calls for a $250,000 appropriation to analyze the health and humans services needs of the LGBTQ population.

“We suffer from parents who disown their children,” Dunn told lawmakers. “We like to pretend that doesn’t happen because we are a forward-thinking state… but there are a lot of youths (whose)…parents have abandoned them, which then eliminates them from health care, eliminates them from access to so many resources.”

Dunn said that while he was able to help the 16-year-old, in other parts of the state, such as the Northeast corner, there is no community center that would provide that kind of assistance.

“We don’t know how often this happens and we don’t know how many kids do this and then maybe engage in sex work and find someone that takes care of them,” Dunn said, adding that this means they aren’t “traditionally homeless” and don’t get counted as such.

Rep. Jeff Currey, D-East Hartford, said the intent of the bill is “to make sure we have all the right folks around the table in an ongoing conversation … to help identify where in the state we have pockets of need and to be able to fill that pocket with either an existing program or come up with something new, but working in tandem with the Department of Health. It’s a collaborative relationship.”

“We suffer from parents who disown their children. We like to pretend that doesn’t happen because we are a forward-thinking state.”

Currey, who introduced the bill, along with Rep. Raghib Allie-Brennan, D-Bethel, said the $250,ooo would serve as “seed money” to help gather data for securing grants from the private sector. The network would consist of representatives from more than a dozen health and human service non-profit agencies as well as some state agencies.

New York and California have similar networks, Currey said, but Connecticut would be the first state to put it into legislation.

Those testifying painted a grim picture of the many health and human services needs of the LGBTQ community and the difficulty of finding such help in certain regions of the state.

Conor Pfeifer, a development officer with the Triangle Community Center in Norwalk, which offers case management, training and counseling, said that LGBTQ youth account for 23 percent of the homeless youth population in Connecticut, even though the community represents only about 4 percent of the state’s population. 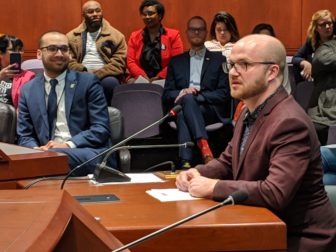 In addition, he said, 22 percent of the state’s LGBTQ residents report not having an adequate supply of food and 15 percent of all hate crimes in the state victimized LGBTQ people. He also said the LGBTQ community struggles with mental health issues at a higher rate than the general population.

“It is a challenge, too, to find a care provider in the medical field who will understand your identity and lived experience if you are LGBTQ,” he said.

Pfeifer said his agency helps people with diverse sets of needs, from finding housing for a person who had spent years living in a car to helping transgender people in Bridgeport who are fighting job and housing discrimination.

“We need your help now (in) getting access to housing, nutritional assistance, finding good services,” Pfeifer said, “and building trust between us and local government.”

Annastasia Martineau, a junior at the University of Connecticut, said that as an LGBTQ youth who grew  up in the northeast corner of the state, “I can tell you that the need for better data on our communities, representation in public policy, and connectivity to the rest of the state is central to ensuring a safer and healthier environment.”

Dunn’s testimony seemed to especially trouble lawmakers when he said, “Most LGBTQ people spend the first 10, 12, 15, 20 years of their life debating if their parents are going to ever love them if they ever say who they are and that takes a huge emotional toll, which is why we see such high suicide rates.”

He said that about one in two transgender youth will attempt suicide, while one in five gay men will do so, and one in three lesbians will.

“You’re describing a tremendous lethality risk for this population that we are only beginning to address,” Rep. Anne Hughes, D-Easton, said to Dunn. “Do you think establishing this health and human services network will make an impact on that appalling statistic?”

Dunn said he thought it would help because without data to back up funding proposals, centers like his own cannot qualify for grants.

Rep. Catherine Abercrombie, co-chairperson of the Human Services Committee and a Democrat from Meriden, responded to Dunn saying, “As a mom, I can’t imagine what these young people go through with not being accepted by their parents. That’s the saddest thing any parent can do…

Sen. Marilyn Moore, the other co-chairperson of the committee, said it took her daughter until she was 19-years-old to tell her that she was gay.

“She thought I was going to be devastated,” Moore said, “and I said while I’m not even surprised, I don’t know why it took you so long tell me. So I understand  why we need better data … I don’t think this is a liberal issue. I think this is a human issue.”

Hughes said later that she supports the proposal. “We’ve disinvested in this community and the impact is obvious in the risk that they were describing and the rates of suicide and homelessness. It’s about time we invested. Their basic safety is at risk.”