Senate endorses early voting, but not with margin to get on 2020 ballot

The Senate endorsed a constitutional amendment Wednesday that would create an early voting system, but failed to pass it by the margin necessary to place it on the 2020 November ballot.

The chamber voted 23-13 to approve the proposal, falling four votes short of the three-fourth’s margin needed to send it before voters 18 months from now.

Senate Republicans who came out against the plan said they were uneasy with the resolution’s lack of detail on how the early voting would work in Connecticut. Such a proposal would be unlikely to boost civic engagement, they reasoned, as voters already have sufficient access to the polls with same-day registration and absentee ballots.

They also worried about fraud. 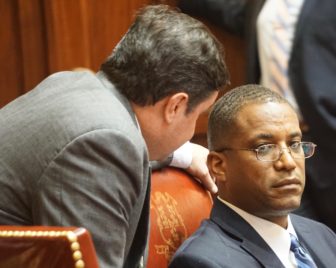 “This resolution will give lawmakers the ability to use political power to meddle with current constitutional protections that we have,” said Sen George Logan, R-Ansonia. “This resolution could open up our voting system to more potential fraud and disenfranchise the current system. If someone cannot make it to the polls on Election Day, they can still vote via absentee ballot.”

He did not elaborate on the type of fraud to which municipalities could be subjected.

“I view this … as a blank check for the next legislature to do whatever they want with,” said Sen. John Kissel, R-Enfield. “I’m concerned about that and my constituents are concerned about that. They want to know exactly what does ‘quote-unquote’ early voting entail.”

Several hours before the vote, Kissel said that if the resolution was not approved by the 75 percent margin, “it simply means that it’s not going to be fast-tracked.”

Kissel said he spoke to his constituents about the proposal and “they felt a rush in this area was misguided. There’s no need to rush.”

Shortly before the vote, Senate President Pro Tem Martin M. Looney, D-New Haven, spoke in favor of the resolution, saying, “I think this is an important policy area for the state of Connecticut, an area in which we once had the lead, but have fallen behind. I think we have been a leader in access to voter registration but not in access to actual voting because of our absence of an early voting mechanism that so many other states have adopted.”

“I think it’s time for us to move forward on that, to give the people an opportunity to vote on that question and to give us a chance then, if the people so approve it, to legislate in that area.”

Sen. Steve Cassano D-Manchester, also spoke strongly in favor of the bill saying that it would prevent “those 8 o’clock rushes at the polls that we see so commonly, particularly when we have national elections. That’s why other states have made the change to prevent that kind of almost an invasion on the polls because you can’t do it all in one day… You’ve stood in those long lines. Everyone has been at the polls and we see people turn around and go home because the lines are too long. This is an attempt to rectify that.”

Connecticut is one of 11 states without early voting at the polls and one of only three whose state constitutions bar it. In 2018, nearly 40 million Americans in 39 states and the District of Columbia went to the polls before Election Day.

Amending the constitution is cumbersome. There are two paths to place the question on the ballot, each beginning with legislative action.

If three-quarters of both the House and Senate endorse a resolution, it is placed on the ballot in the next biennial state election. In that case it would go on the November 2020 ballot.

If both chambers pass the measure, but at least one does so with less than a 75 percent endorsement, then it must be referred to the 2021 session of the legislature. If it passes in that session by a simple majority, it will appear on the 2022 general election ballot.

If a majority of those voting on the amendment in the general election approve it, the amendment will become part of the state constitution.

The vote in the Senate ran along party lines except for  Sen. Tony Hwang, R-Fairfield, who voted in favor of it.

Early voting has been controversial in Connecticut. In 2014, residents rejected what Secretary of the State Denise Merrill called a poorly worded amendment — it talked about removing restrictions on absentee ballots and not early voting — by a vote of 491,447 to 453,070. The new question asks, “Shall the Constitution of the State be amended to permit the General Assembly to provide for early voting?”

Merrill said, “I’m glad the Senate passed early voting, however it’s disheartening that the majority of the Republican Senate caucus was unwilling to make voting more convenient for their constituents. This is especially true considering the overwhelming bipartisan support this amendment received in the House, just a few weeks ago.”

She said that early voting is “a reform that is widely accepted and wildly popular across the country. From Arkansas to Wyoming, there is bipartisan consensus that early voting allows more voters to exercise their right to vote more conveniently.”

“It is shameful that only one Republican senator was willing to put the interests of their voters ahead of perceived, yet misguided, partisan advantage. This amendment wasn’t about partisanship, it was about the voters.”

Gov. Ned Lamont has signaled support for the proposal.

“Creating a system of early voting in Connecticut is a concept that is long past due, and I’m glad that we are on a path to making it easier for every eligible citizen of our state to cast a ballot,” he said. “During the most recent statewide election, we had people waiting in line in the pouring rain, in some cases for several hours, for the opportunity to cast a ballot. In today’s economy, it is not realistic to expect every citizen to be able to go to one specific location during a certain set of hours on a Tuesday to cast their ballot.

“If we truly want more people to be active participants in our democracy, there are many more things we can be doing to make it easier to vote, and early voting is one of them.”