Bills like those have been featured in the NPR-Kaiser Health News series launched in February 2018. 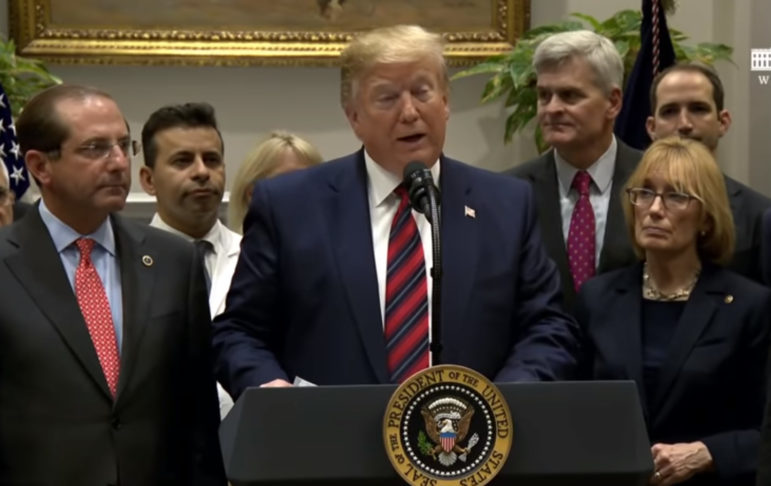 Two patients whose medical bills were part of the series attended the event.

Austin, Texas, teacher Drew Calver talked about the six-figure bill he received after having a heart attack. “I felt like I was exploited at the most vulnerable time in my life,” he said. His bill was reduced to $332 after the NPR-KHN story was published.

A bipartisan group of senators has been working to come up with a plan for the past several months. They said Thursday that they hope to have a bill to the president by July.

But will bipartisanship be enough? Even political will might not overcome divisions within the health industry.

Specifically, lawmakers aim to address the often-exorbitant amounts patients are asked to pay out-of-pocket when they receive care at health facilities that are part of their insurance network but are treated by out-of-network practitioners. Legislators are also looking to address bills for emergency care at a facility that doesn’t have a contract with patients’ insurers.

And it’s not just politicians and patients: Out-of-network doctors, insurance companies and hospital groups say they want the problem for consumers fixed, too.

Despite that broad agreement, a hurdle remains. Insurers and health care providers each oppose the other side’s preferred solution to end surprise bills. That conflict makes it almost impossible for lawmakers to come up with a fix that won’t leave one of the influential groups unhappy.

“It’s a different axis than the partisan [conflicts] we’re used to,” said Loren Adler, who has been studying the surprise-bill problem for the USC-Brookings Schaeffer Initiative for Health Policy. The fight over how to fix it is less likely “to break down between Republicans and Democrats and more likely to break down to where the money is” and which group will have to take less of it.

“I don’t see a coalescence around a solution,” said Chip Kahn, president and CEO of the Federation of American Hospitals, which represents for-profit facilities.

The divide is wide, despite the overall interest in protecting consumers.

“What we’d most like to see is clarity for the patients,” said Bob Kneeley, a senior vice president for Envision Healthcare, which employs physicians to staff a variety of hospital departments, such as emergency rooms, neonatal units and anesthesiology. “This is a system that’s just not working well for the patient, and we need to establish some appropriate guardrails.”

“We want this to be solved. We know it needs federal legislation,” agreed Molly Smith, a vice president at the American Hospital Association. She said hospitals believe that patients should “not have to be involved in any process if there’s a dispute between the payer and the provider.”

States have been working on the problem for several years. Nine now have programs aimed at protecting patients from surprise bills. But state laws cannot reach those with employer-provided insurance — more than half of all Americans — because those plans are regulated by a federal law called the Employee Retirement Income Security Act, or ERISA. That means only Congress can fix it for everyone.

Patients and groups that represent them say the problem is more urgent than ever.

“We are talking about situations in which families — despite enrolling in health insurance, paying premiums, doing their homework and trying to work within the system — are being left with completely unanticipated and sometimes financially devastating bills,” Frederick Isasi, executive director of the consumer group Families USA, told a House Education and Labor subcommittee hearing in April. “This is inexcusable behavior on the part of hospitals, doctors and insurers. They each know — or should know — that patients have no real way to understand the financial trap they have just walked into.”

Dr. Paul Davis, whose daughter received a bill for a $17,850 for a urine test after back surgery, also spoke at the White House on Thursday: “The situation is terrible. It is a national disgrace, and I think a lot of people would support me on that,” Davis told a reporter. Their story was the first featured in the “Bill of the Month” project.

Still, it’s not clear where compromise might be found.

By and large, doctors favor some sort of negotiated-fee system when there is a dispute about a bill, such as binding arbitration, in which an independent third party makes the ultimate payment decision.

Among those frequently cited by doctors’ groups is New York, which has one of the strongest state laws on surprise billing. There patients are not required to pay more than they would for an in-network doctor or hospital. For the remaining bill, an independent arbitrator settles any dispute between the provider and insurer.

But the insurance industry worries about that approach. “Our larger concern with arbitration is that it still relies on bill charges,” said Adam Beck, a vice president for America’s Health Insurance Plans, an insurance industry trade group. And insurers think those charges are too high.

Insurers — and many consumer groups — “believe if you have a clear benchmark pegged to reasonable rates, that will really solve this problem,” Beck said, because insurers would be more likely to cover charges they found more in line with what they consider reasonable.

A “benchmark” payment might correspond to what Medicare pays for the same service, for instance.

But doctors don’t like that idea one bit. “Even if [the benchmark] is on the high side, it’s still rate-setting,” said Kneeley.

“We can’t get behind any sort of rate-setting in statute,” said Smith of the AHA. “We have too many concerns about getting that wrong.” For example, she said, if the rate is set too low, hospitals might have trouble finding doctors willing to provide care.

Meanwhile, insurers and hospitals want to ban out-of-network providers from billing patients for whatever part of the charge the insurer won’t cover, a practice called “balance billing.”

Such bans are anathema to doctors, who instead believe insurers bear responsibility for doctors not being in their networks because they “don’t have an incentive to offer fair rates,” said Kneeley. Although insurers often feel they must contract with specific high-profile hospitals, he explained, the doctors who work there are often “invisible providers.”

Addressing the underlying causes of high health costs, however, will be difficult, said Adler of USC-Brookings.

Doctors want to be paid more than insurers typically offer, he said, which is why some do not join insurance networks. And insurers “want the problems [with surprise bills to patients] to go away.” The question for them, he said, is, “How much are insurers willing to pay to have their patients not get surprise bills?”

In the end, a settlement that eliminates surprise bills but builds the excess into everyone’s premiums doesn’t truly address health care’s spending problem.

“I think there’s a good chance it gets solved,” Adler said, and that lawmakers will eventually agree on a plan. “But I’m pessimistic it gets solved in a way” that deals with health care’s high costs.

KHN senior correspondent Fred Schulte contributed to this report, which was first published May 9, 2019, in Kaiser Health News.