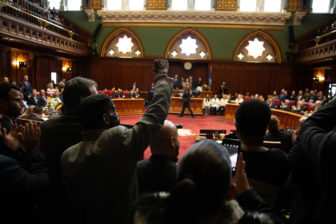 The state Senate advanced a bill Wednesday that would require nursing homes to disclose on a daily basis the number of direct-care staff members assigned to patients, a measure designed to increase transparency and encourage the facilities to hire more employees who work closely with residents.

Under the proposal, nursing homes would have to post the number of registered nurses, licensed practical nurses, advanced practice registered nurses and nurse’s aides they have on staff, along with the hours they are scheduled to work during each shift.

The notice also must include the minimum number of employees per shift mandated by the state. Connecticut’s public health department requires nursing homes to provide at least 1.9 hours of direct care to each patient on a daily basis.

The information would have to be posted in “a conspicuous place” clearly visible to residents, employees and visitors.

“This would help transparency but also … hopefully increase the quality of care and the support system that nursing homes have,” said Sen. Saud Anwar, D-South Windsor, a key proponent of the bill. “If we were to ask the nursing home administration, they would claim that they have the right amount of employees taking care of patients. However, the difference is that if you talk to some of the residents or their family members, or if you talk to the staff – they would actually feel otherwise.”

Senate Democrats pushing the proposal have cited research from Kaiser Health News that analyzed daily payroll records from more than 14,000 nursing homes nationwide. It found that most had fewer staff actually involved in care-taking than were shown in federal Medicaid reports — which don’t distinguish whether a class of employees normally involved in patient care is actually performing a different function.

The level of staff directly assigned to patient care is linked to positive outcomes, officials have said. The issue is critical in Connecticut, which has one of the oldest populations, on average, in the United States.

Connecticut has about 27,000 nursing home beds and roughly 85 percent of them are occupied.

Unionized workers from 20 Connecticut nursing homes have threatened to strike if money isn\’t added to the budget for pay raises.

Prior to the vote, Republicans introduced several unsuccessful amendments, including a proposal to give a 1 percent rate increase to nursing homes as employees threaten to strike, and a mandate that the attorney general seek court orders to reduce or revoke the pensions of state-run nursing home workers who are convicted of felonies.

The most hotly debated amendment would have provided an increase in the monthly personal care allowance given to elderly nursing home residents who have exhausted their financial resources. The allowance covers clothing, haircuts and other personal needs.

The plan would have boosted the monthly allowance to $72 per person, up from $60, which Republicans estimated would cost the state an additional $1.3 million.

“When I think of $60 a month, I think of one trip to a restaurant or a tank of gas,” said Sen. Dan Champagne, R-Vernon. “It blows my mind that we’re not raising this even more. I’m not a proponent for raising taxes, but this is helping some of the poorest people in our state.”

Democrats argued that any financial commitment would bog down the legislation. The bill now heads to the House.