Bill would stop restaurants’ use of Styrofoam containers

Two years from now, restaurants and caterers would no longer be able to use single-use “expanded poly-styrene” or Styrofoam containers under a bill passed Tuesday by the House.

“This bill is introduced to reduce litter in our parks, in our urban centers and our water streams and it is because Styrofoam takes over 200 years to break down in our landfills and it takes up 30 percent of our landfills,” said Rep. Dorinda Borer, D-West Haven, a member of the legislature’s environment committee. 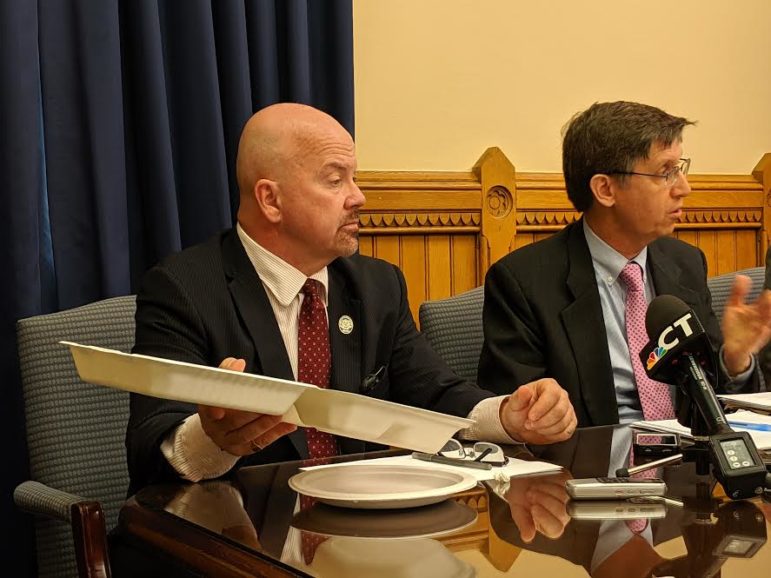 Rep. Joseph Gresko told reporters Tuesday that House Democrats are no longer using containers made of Styrofoam for events. He holds up a container made of pressed sugarcane that the legislators are using instead. Rep. Mike Demicco, co-chairman of the environment committee is at his right.

Borer said she’d be remiss if she did not also mention that a health report in 2011  said the material can break down and become carcinogenic when it comes in contact with hot, oily, acidic  food. “So I think there are two benefits to this bill,” she said.

The bill is one of several environmental bills aimed at reducing the waste stream in the state. Another, House Bill 5385, aims to limit the use of plastic straws by prohibiting full service restaurants from providing a customer with a plastic straw unless requested, while Senate Bill 1003 would prohibit stores from providing or selling plastic single-use carryout bags. The latter bill, which would take effect in January, would also require that any single-use bag provided by stores be 100 percent recyclable with a conspicuously displayed message on the bag that urges customers to reuse and recycle the bag.

Rep. Joseph P. Gresko, D-Stratford, and vice-chairman of the environment committee, said during a news conference with reporters earlier Tuesday that the three environmental proposals will be voted on separately rather than all in one bill because it gets harder to pass a bill with multiple components.

“If I want to do containers, but I don’t want to do straws, I’m not voting for the bill,” he explained

Gresko noted that the House Democrats are now using containers and plates made of pressed sugar cane rather than Styrofoam. “That’s happening all over the country, never mind here in the state,” Gresko said, holding up examples of the pressed sugar cane products.

Rep. Mike Demicco,  D-Farmington, and co-chairman of the environment committee, said later that there is a trend toward using more “environmentally responsible materials.”

“People are recognizing that there are better products to to be used, and they are asking for them,” he said.

The bill  would take effect in July 2021 and would be enforced by a local health department or district or the state departments of Consumer Protection, Energy and Environmental Protection or Public Health.

Under the bill, an owner or operator who violates the prohibition is subject to a fine of $250 for a first violation, $500 for a second violation and $1,000 for any subsequent violation.

The bill also requires the state consumer, environmental and public health commissioners to submit a report by Feb. 1, 2022, to legislators on enforcement issues, as well as on the need to establish a hardship waiver for a food establishment with a demonstrated financial hardship caused by the bill’s provision.

The Senate gave unanimous approval Tuesday to a measure that would allow public businesses and places, such as baseball stadiums, camps, restaurants and the state Capitol, to stock epinephrine auto injectors in case an adult or child has an allergic reaction.

It would also ensure that someone administering an EpiPen is trained and that he or she could not be held liable for any problems that arise.

The Food and Drug Administration estimates there are 30,000 emergency room visits, 2,000 hospitalizations and 150 deaths due to anaphylactic reactions to food each year, according to information provided by legislators.

The bill was prompted by Sen. Matthew Lesser’s own health scare last year. Lesser attended a legislative reception and ate a dessert that looked like chocolate mousse, but turned out to contain peanuts. His reaction was so severe that he had no detectable pulse by the time he was admitted to the hospital.

“There is no requirement that entities stock epinephrine under this bill. This is simply allowing them to do so if they choose,” Lesser said. “My hope is that a lot of entities will choose to … and as a result we will see it in all kinds of places – in summer camps, in work places.”

Sen. Saud Anwar, a physician, said there are few medications “that in a matter of minutes can save an individual’s life.” Epinephrine is one of them.

“That’s going to be the critical piece we have to recognize,” he said. “Whether we like it or not, the number of people who have allergic reactions to medications, bee stings or even food is increasing.”

If there is also a rise in access to EpiPens, he said, “we are going to be saving lives.”

… and an ‘upskirting’ ban

The Senate on Tuesday also unanimously endorsed a bill designed to close a loophole in Connecticut’s anti-voyeurism statute.

The law already bans people from knowingly filming, photographing or video recording a person’s undergarments, genitals or buttocks in an area “where such other person has a reasonable expectation of privacy.”

But lawmakers have said the state’s attorneys’ office reported “a number of instances” in which they could not charge someone with violating this statute because the action occurred in a public place.

The so-called “upskirting” bill makes it clear that no photography or video recording of sensitive areas may occur “under or around a person’s clothing” – even in a public place.

The Senate voted 31-3 to approve a bill that directs the Department of Energy and Environmental Protection to study nonlethal options to manage Connecticut’s black bear population.

The bill, which heads to the House of Representatives, would require the department to report to the legislature by Feb. 1.

Sen. Christine Cohen, D-Guilford, co-chairwoman of the Environment Committee, said the hope is this study would explore new bear control techniques employed in other states that Connecticut could implement.

But critics predicted the study would provide little new information.

Sen. Craig Miner, R-Litchfield, who voted for the measure, said more research might help DEEP officials stop bear activity from spreading. But Miner also was skeptical it would do much to control the bear population in and around his district, where sightings are more frequent.

“This is not going to change what’s happening in Litchfield County,” he said.

The chamber also voted down a measure that would have expanded the circumstances under which the state’s department of Energy and Environmental Protection could issue permits for capturing, trapping or killing nuisance wildlife.

Currently, the commissioner can hand out permits when it is shown “to her satisfaction” that wildlife is causing “unreasonable” damage to crops at night, and controlling the creatures is not possible during the day. The bill would have allowed people with licenses to kill wildlife at any time day or night in situations involving damage to crops, livestock, poultry or bees. People would only be permitted to shoot wildlife on land where the crops are grown or the livestock are kept.