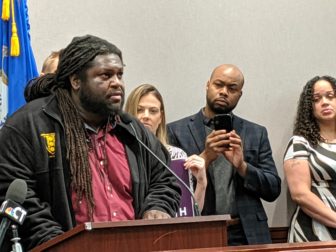 James Jeter, now a Trinity College student, said his mother and grandmothers paid thousands of dollars on phone calls to stay in touch with him when he was in prison for 19 years.

Advocates for a proposal that would allow inmates to make free telephone calls were heartened when the bill was endorsed Tuesday by the legislature’s Appropriation Committee and forwarded to the House of Representatives.

James Jeter, who was in prison for 19 years and is now a Trinity College student, called the vote “a Herculean lift that no one thought would happen, except those pushing it.”

“I just hope it doesn’t get stalled,” Jeter said. “It deserves a vote.”

At a news conference shortly before the committee vote — which was 29 to 19 — Jeter and other advocates spoke about the need for the bill and criticized the current system which they said is not only expensive but allows the state to profit from the calls.

Since 2012, the state has contracted with Securus Technologies, a national prison telecommunications corporation. Connecticut families pay between 21 and 32 cents a minute, or about $4.87, for a 15-minute phone call.

Bianca Tylek, executive director of Worth Rises, a New York-based national criminal justice advocacy group, said that Connecticut ranks 49th, in front of only Arkansas, in the high cost of prison phone calls.

“This is a racial justice issue, this is an economic justice issue. This is not just a criminal justice issue,” Tylek said at the news conference. “These are communities that are vulnerable in every which way. That $5 for a 15 minute phone call changes lives.”

It seems especially unfair to advocates that the state makes money off the phone calls, collecting a $7.7 million profit in 2018.

The plan would be for the free communication services to take effect in 2021.

A fiscal note on the bill estimates that in Fiscal Year 2021, it would cost the DOC $5 to $6 million to offer free phone service and would result in a revenue loss to the state of $7.7 million.

Securus Technologies had opposed the bill, but in a letter dated May 22, Securus CEO Robert Pickens wrote to Rep. Josh Elliott, who sponsored the bill, that “in the interest of good faith discussions with state officials regarding these issues, we are formally withdrawing opposition to the legislation.”

“Further, we want to make clear that should the legislation pass we are committed to working with the state on executing a seamless and orderly transition including any necessary work with the Connecticut Public Utilities Regulatory Authority.”

Pickens also said that given the potential elimination of the commission to the state, “we are committed to downwardly adjusting call rates.” 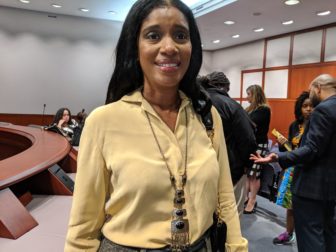 Diane Lewis said it’s been a top priority for her to talk to her son, who has been in prison since 2004, even though the high cost has caused her hardship.

Elliott, a Democrat from Hamden, said Tuesday afternoon that while the letter from Securus was good news, it arrived very late in the session.

He said he’s still going push to get the bill passed this session but with only a week left, he realizes it may not be possible.

“Even if we just get it through the House this year, I’ll be happy with that,” he said. “It puts us in good shape for next year.”

Jeter, who was convicted of robbery and murder, said that his mother and two grandmothers spent thousands of dollars keeping in touch with him and his brother when they were both in prison. Besides being a student at Trinity, Jeter is also a Tow Fellow at the Yale Prison Education Initiative.

“I was fortunate at that time. They could afford it,” Jeter said, “but looking back at what that means, my mother is 60 and looking to retire. She spent over $12,000 on prison phone calls that could easily go into a 401k or anything else to aid her at this transition in life. Instead, it went to pay exorbitant phone call prices.”

He said there are men and women in prison who never talk to their children because their families don’t have the money to pay for calls, yet research has shown, he continued, that the more contact children have with an incarcerated parent the better the chance is that they will never enter the prison system.

“This is more than just freeing up money,” Jeter said. “This is freeing up our future.”

Diane Lewis, a Hartford resident whose son has been in prison since 2004, said she is pleased and hopeful about the bill, not only for herself but for all the other mothers also struggling to pay the current charges for phone calls.

“Why is it so hard for people to realize that just because my son is in prison, that doesn’t mean I don’t want to have contact with my kid?” Lewis said after the news conference. “It’s like the people who send their kids off to college, you don’t rest until you hear from your child. That’s how I feel about mine. I don’t care what he did or what he’s alleged to have done.”

“I do without lunch. I do without dinner. I do without a lot of things. Every month I’m budgeting. That’s my first bill because I could sit in the dark and talk to my son. It’s basically my first priority and has been since 2004.”

Rep. Robyn Porter, D-New Haven, who voted in favor of the bill Tuesday, said the affirmative vote “keeps the pressure on.”

Porter said she knows personally about the importance of phone calls and communication because her son was in prison for several years.

“When people are incarcerated, most families cannot even afford the phone calls,” Porter said, “But we know how important it is to have family and social cohesion exist when we have people that have been incarcerated. Yes, they have committed a crime, but they are doing their time. We should not be stripping them from their family.”