Gov. Ned Lamont on Friday signed into law two gun safety measures, keeping momentum in a movement to end gun violence in the state– a movement that, unfortunately, has only gained more traction with each new shooting death in the U.S.

Before putting pen to paper, Lamont recounted the phone call he received a week after taking office about the death of 12-year-old Clinton Howell, who was shot during a random act of gun violence on the front porch of his home in Bridgeport in late 2018. 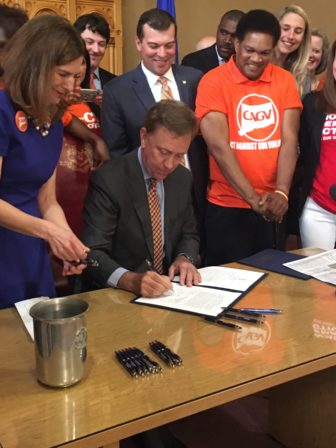 Lamont said the tragic and inexplicable nature of the shooting was one of the many reasons the two pieces of legislation were important to him. “It’s not just a couple of laws that I have the opportunity to sign, it is a movement,” he said.

One of the bills bars gun owners from leaving a handgun in an unattended motor vehicle unless the firearm is locked in the trunk, a glove box, or “a securely locked safe.” A first offense is a misdemeanor, punishable by up to one year in prison.

The other would regulate 3D-printed firearms and ban so-called “ghost guns” that can be assembled from untraceable parts unless the owner obtains and engraves the weapon with a serial number received from the state Department of Emergency Services and Public Protection.

Jeremy Stein, executive director of Connecticut Against Gun Violence, said the safe storage legislation would make Connecticut one of fewer than 10 states with a vehicle safe storage law on the books despite statistics which show most gun thefts are from owners who leave their guns unsecured in their homes or vehicles.

“These [stolen] guns end up killing people and being used in the commission of crimes,” Stein said. “A gun was stolen from an unlocked car in Glastonbury and was used to shoot a Hartford 10-year-old in the head. A semi-automatic pistol, stolen from a Cheshire driveway, was recovered at the scene of a crime in West Hartford, and a gun was stolen and then used to kill 12-year-old Clayton Howard in Bridgeport just six months ago.”

Stein said requiring handguns to be secured in homes and unattended vehicles would “choke off a key source of illegal guns,” and help prevent accidental shootings, mass shootings, crimes, and suicides, while the ghost gun legislation would help stabilize the surge of “untraceable firearms that are an increasing problem in Connecticut.”

Rep. Steven Stafstrom, D-Bridgeport, who was hailed as a champion of the legislation by colleagues and advocates, said the bill was a step forward in the effort to end gun violence and a tremendous show of bipartisan collaboration.

Stafstrom, who lamented over similar ghost gun legislation that died on the vine last year under Gov. Dannel Malloy, said the success of this legislation broke the “stalemate of signing one gun bill every other year.”

The advocates and survivors in the room on signing day were numerous, and among the sea of stakeholders was Deborah Davis, a member of Mothers United Against Violence, a Hartford based advocacy group that has been operating in the city for more than 15 years.

Davis claimed Friday’s signing as a victory in the long war against gun violence, to which her son Phillip fell victim in January of 2010.

“I lost my son in 2010 and I have not sat down since then,” Davis said. “I have been a fighter since that time and will continue because I’m not just fighting for [my son] Philip, I’m fighting for all the other young people that we have lost. It is time for movement and I am on board.”