Waterbury — One key to a better future for Connecticut’s cities could lie beneath the ugly scars from its industrial past, blighted and often toxic pockets that mar city landscapes statewide.

The state has made strides to develop programs that have managed to attract developers to former industrial sites in cities, spending $206 million over the past decade alone.

But the state’s system of measuring the gains made by pouring millions into cleaning its polluted sites is flawed — the state doesn’t track number of jobs created or taxes generated after cleanup.

It also doesn’t accurately track the acres cleaned and there’s no complete inventory of polluted sites. 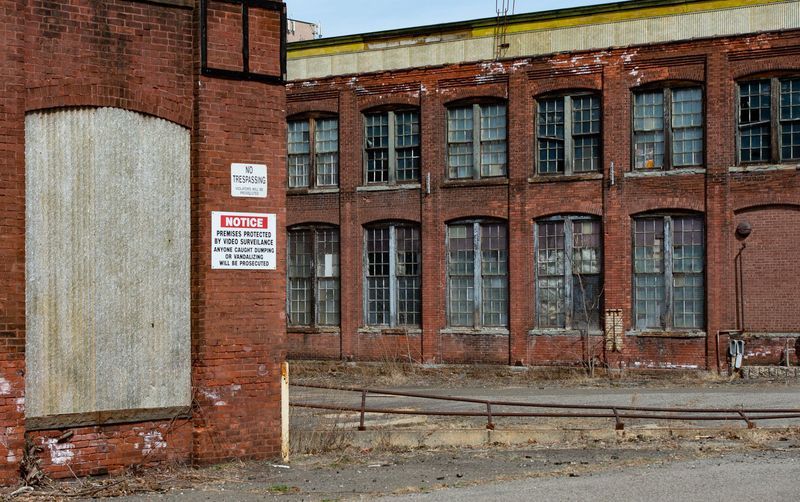 The Smurfit-Stone Container site in Torrington is among what state officials say could be “tens of thousands” of brownfields sites across Connecticut.

These former industrial sites — where fears of pollution, known and unknown, frighten off developers and the crumbling bricks and broken windows bring down property values for blocks all around — are known as brownfields.

Waterbury holds a reputation of accomplishment in brownfield redevelopment. The city’s most recent target is the former Anamet manufacturing complex. The city is using $3 million from the state to demolish most of the buildings in the complex. The city hopes a clean site will attract a developer.

Anamet is a good example of the challenges of the state’s urban brownfields. It had once been a bustling employment center before closing in 2000. More recently it has looked like a relic from a fallen civilization as trees and shrubs reclaimed paved lots and buildings crumbled. Graffiti is widespread, windows are broken and garbage is collected in heaps.

Olga Jimenez, who lives across the street from Anamet, has come to expect litter near her apartment. She won’t let her grandchildren play in her front yard because of the prostitutes and drug users who took advantage of the former factory’s dark spaces.

Demolish it all, Jimenez said. “If this is down they can’t go back up in there and shoot drugs and do what they want to do, because it’s going to be an open spot,” she said. “There’s a lot of dumb stuff that goes on in the street, but that could be dangerous. They’ve already set it on fire a couple of times.”

The blight has set the tone for the neighborhood, it speaks to what was lost, rather than what could be, said 20-year-old Emily Ramos. Her grandparents own a house across from the long-desolate and threatening Anamet site. She is happy to see heavy machines tearing down buildings.

“For years these buildings have just been taking up space that were once places where people had jobs,” Ramos said. “No matter what it turns into, whether it’s a place that will offer more job opportunities or more housing complexes, I think it’s just going to benefit this community in general bringing more people in.”

The $3 million in state grants won’t be enough to completely clean the site. The city is seeking another $2 million to finish the job.

Experts and state officials agree that state funding is the most important key to cleaning abandoned and polluted industrial sites. Without state backing it often doesn’t make economic sense for developers to spend millions of dollars for cleanup in depressed urban areas.

The Connecticut Department of Economic and Community Development is able to track money spent through its official brownfield programs, at least for the past decade. But it can’t account for how much money has been spent on direct grants to pet projects, such as Anamet.

The DECD is unable to provide a history of this type of brownfield funding stream. DECD spokesman Jim Watson said that’s because these grants are often allocated for a mix of projects in addition to brownfields.

It’s also impossible to tell how many acres were cleaned through the state’s brownfield program. The state’s records mingle acreage cleaned with acreage of sites where studies of the extent of pollution have occurred, but where no cleanup work has been performed.

The General Assembly’s Commerce Committee, headed by Waterbury Democrat Sen. Joan V. Hartley, whose 15th District includes parts of Waterbury, Middlebury and Naugatuck, has proposed spending $100 million on brownfield cleanups over the next four years. The General Assembly’s Finance, Revenue and Bonding Committee forwarded a proposal that would pump $30 million into brownfields in fiscal 2020 and $10 million the following year.

”We never run out of projects, we always just run out of program allocation, so we know there is a very robust populace of need and requests,” Hartley said. “When we are talking about the economy of the State of Connecticut, I cannot foresee any administration walking away from the brownfield program.”

State legislative leaders announced a budget compromise Thursday. As of Friday, Hartley’s office and the DECD were unable to say how brownfield funding fares under the compromise.

In Hartley’s district, Middlebury doesn’t have any sites on the state’s list of brownfields. Taken together, Naugatuck and Waterbury have 37.

Advocates for brownfield cleanups are keenly aware of the state’s budget cuts.

Bogen’s group acts as consultants for municipalities, able to head brownfield redevelopment on their behalf.

“Without the marketplace backing them, nothing will happen,” Bogen said. “They are blighted. They have environmental issues and they sap much of the tax bases of cities that need to improve those tax bases.”

Bill Coleman, deputy director of Bridgeport’s Office of Planning and Economic Development, said state assistance has enticed companies to invest in polluted sites in his city.

Bridgeport received $16.7 million from state brownfield programs between July 1, 2009, and Dec. 1, 2018. That prompted $257.8 million in investment in Bridgeport brownfields from federal and local governments, as well as private business sources, according to DECD.
“The good thing is we don’t have market failure,” Coleman said. “In Connecticut cities there are market impediments. If you remove those impediments, investment will happen.”

Developers, nonprofits and municipalities have received more than $206 million from the state’s brownfield programs over the past decade. That’s drawn another $3.2 billion from “other sources” to redevelop brownfields, according to DECD.

Demand for the state programs and grants have been high.

Around Waterbury’s Anamet site, residents said they hope for a productive use, something that will boost the neighborhood. But they could be happy with retail, housing or industry, just as long as the dilapidated factories are gone.

“Once the old buildings are knocked down the city will look better,” said 45-year-old Arixsa Vargas, owner of Maria’s Hairstyling on South Main Street, a short distance from Anamet.

Vargas took over the 33-year-old styling shop from her mother in March and the pair have long worked together. Customers have noticed the demolition work down the street, she said.
“They’re happy the ugliness is going away,” Vargas said.