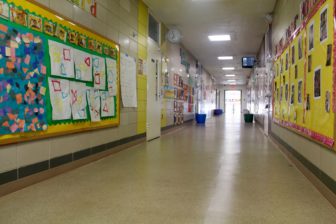 The national study found that 70 percent of 17,000 school districts in U.S. reported zero incidents of restraint or seclusion.

The study, done by the U.S. Government Accountability Office, said that more than 70 percent of 17,000 school districts in the U.S. similarly reported zero incidents of restraint or seclusion to the U.S. Department of Education for the 2015-16 school year– the latest available data.

The review has prompted the GAO to question whether districts are misreporting the data, noting in a statement that the data “does not accurately or completely reflect all incidents of restraint and seclusion of public school students.”

U.S. Rep. Rosa DeLauro, D-3rd, said in a statement that the report “reveals deeply concerning gaps and inaccuracies in the Department of Education’s data on the use of restraint and seclusion.  These practices — which are meant to be used as a last resort — disproportionately impact students with disabilities, yet many of our nation’s largest school districts continue to report no incidents where these measures were used.”

“Protecting all students in our nation’s public schools must remain our priority, and part of that goal is identifying how widespread these practices are.”

No one from Connecticut’s State Department of Education could be reached for comment late Tuesday afternoon.

The federal education agency requires nearly every school district in the country to submit data on their schools to the Civil Rights Data Collection and has stated that restraint and seclusion should only be used when a child’s behavior poses imminent danger of serious physical harm to him or herself or others.

The GAO report said restraint and seclusion is rarely used in public schools, but that it disproportionately affects male students and those with disabilities.

The GAO’s analysis showed “substantial evidence,” the report said, that “nine of the 30 largest districts (those with more than 100,000 students) inaccurately reported zeros when they actually had incidents or did not have the data.”

None of those nine districts were in Connecticut, but they included New York City Public Schools and Philadelphia City School District.

“While it is difficult to know the full extent of underreporting,” the report said, ” the problems that GAO found with the largest districts reporting zero incidents when in fact the data were missing raise questions as to whether other school districts correctly reported zero incidents of restraint and seclusion. GAO found documents from Education that indicated other, smaller districts also might have misreported zeroes.”

Further, the report said the U.S. Department of Education considers the civil rights data a key part of its enforcement strategy to protect students from discrimination and ensure equal access to education.

“Without adequate systems in place to ensure the accurate, complete reporting of restraint and seclusion data,” the report said, “districts may continue to erroneously report zero incidents and Education may be hindered in its enforcement of civil rights laws.”

The GAO made several recommendations, including one to remind and clarify for school districts when to use zeros and when to leave a data cell blank, and another urging the agency to follow-up with districts that reported zeros and to ensure data submitted in the future are complete.

A statement from the U.S. Department of Education said the agency’s Office of Civil Rights is “pleased that GAO agrees that data quality is an important goal in this context. OCR is already in the midst of making improvements and therefore agrees with the spirit of GAO’s recommendations.”