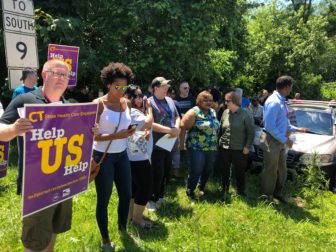 Middletown — Unionized employees at Whiting Forensic Hospital on Wednesday described dangerous staffing shortages and forced overtime that has left them unable to meet the needs of some of the state’s most challenging psychiatric patients.

Whiting is the state’s maximum security psychiatric hospital, housing, among others, patients who have been acquitted of crimes by reason of insanity. Concerns about the safety of patients at Whiting increased significantly in recent years following a whistleblower complaint alleging that staff had abused a patient. State police charged 10 employees with abuse in the case, while 37 other employees were placed on administrative leave. All but one of those employees has left state service.

“This chronic understaffing, the exhaustion of the workers currently in the building and the lack of support and training from management and the administration” creates dangerous conditions for patients and staff alike, said Avery Pittman, the 1199 organizer for CVH and Whiting.

Nurses told the crowd their facilities are not adequately staffed, undermining their ability to meet their patients’ needs.

“In the last three years, the staffing has gotten so bad that patient care has truly suffered in the midst of an opioid crisis here in the state of Connecticut,” said Tony Long, a nursing staff caregiver for addiction services at CVH. “We’re so short-staffed that I often, myself, have to tell the patients that I cannot help them because I have so many other duties, the duties of two or three staff members.”

Spread thin because of the gaps in staffing, mental health professionals are routinely required to work shifts of up to 20 hours, sometimes multiple times per week, workers said.

“What kind of health aspect is that for the patients and the staff?” asked Bromley German, a registered nurse in Whiting’s Dutcher Service, a 138-bed facility that has a lower security level than Whiting. “You’ve got staff that are overworked, staff that have no home life, staff whose health is going to be affected, and how is that going to affect the way they interact with the patients?”

Susan McKinley, a licensed clinical social worker at Whiting, said the shortage of both social workers and nurses at Whiting is putting an immense strain on everyone.

“On an average day, now social workers, nurses and nursing staff are simply scrambling to get all of the basics covered,” she said, adding, “Whiting is a safety net for the state’s mental health system, and we care for those who have been deemed too challenging, or too dangerous, or simply unmanageable, by other entities.”

For the past 18 months, the state’s Department of Mental Health and Addiction Services (DMHAS) and the union have been talking about the importance of filling staffing shortages and the need for training so health care providers can tend to the needs of all their patients.

On Tuesday, the union delivered to DMHAS a petition signed by more than 700 employees. The document calls on the hospitals and the state to fill nursing positions at Whiting; conduct a joint, six-month analysis of both facilities; hold an on-campus meeting between union members and Commissioner Miriam E. Delphin-Rittmon; end nurses’ strip searches of patients; require agency police officers to escort Whiting patients off hospital grounds; and provide the training and resources needed to ensure patient safety.

“The actions we’re doing today, we’ve been forced to do,” said Paul Fortier, vice president of  District 1199. “This is not about anger. This is about trying to provide services for the individuals that we’ve been serving for years.”

In a written statement, DMHAS spokesperson Diane Shaw said staffing levels at CVH and Whiting “have remained consistent or increased over the past several years.” DMHAS hospitals are “regularly inspected by regulatory and accrediting bodies,” and the department routinely recruits direct care staff at both hospitals to fill open positions.

Shaw noted CVH and Whiting direct care staff must complete an orientation, which includes training on safety strategies, and fulfill annual training requirements. They also have access to additional training that can be completed remotely.

“The Department remains committed to providing a positive and safe environment that promotes dignity and recovery. Over the past year, we have had formal and informal discussions with union leadership and members,” Shaw wrote. “The agency is committed to continuing these efforts to ensure that we keep working collaboratively to implement strategies and approaches that improve our system of care.”