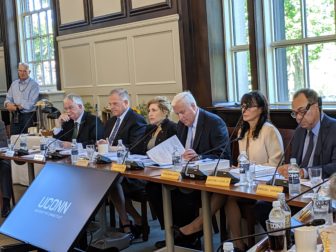 To balance those budgets, university officials explained, they must close deficits of $19.6 million at UConn and $7.1 million at UConn Health – shortfalls driven by state government’s huge unfunded pension liabilities.

“We would have a net positive balance,” Scott Jordan, UConn’s chief financial officer, told the board. “We would be profitable but for the unfunded pension.”

“None of us are blaming anyone for this problem,” Jordan added. “This is a problem we all inherited.”

Jordan provided budget figures that showed that, without the unfunded liability, UConn and UConn Health would post positive bottom lines of $11.4 million and $3.8 million respectively.

“We are reviewing all positions … to try to slow down our spending,” Geoghegan said. “We are going to look at every single position before we just go ahead and fill it.”

However, Geoghegan added, the “the big difficulty is to break even, we are not spending money reinvesting in the institution. So there are a lot of deferred maintenance and capital items that we need to spend money on that we don’t because we send money to the comptroller…”

Like the health center, the plan to close the university’s deficit also centers on reducing personnel costs through attrition and examining all costs for potential reductions.

Noting that students contribute 56 percent of total revenues in the budget for UConn and its satellite campuses, Jordan said the plan this year is not to raise tuition more than was originally planned as part of a four-year schedule of tuition increases.

For Connecticut residents living on campus, that means tuition and mandatory fees would increase from $28,604 to $30,484.

However, next year is the final year in the four-year schedule of tuition increases, which means planning will begin soon for future increases.

UConn President Susan Herbst asked Jordan whether the university would keep tuition flat if it did not have pay the unfunded pension liability costs.

“I wouldn’t say dollar for dollar,” Jordan answered, adding that the unfunded liability is “the key driver of our expenses.”

He noted that historically, for every dollar that is cut in state support for the university, tuition and fees go up between 33 cents and 50 cents.

“About one third or one half of our reduction in state support is picked up by the students,” he said.

A new home for Katsouleas 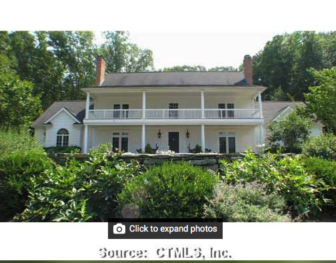 The UConn Board of Trustees voted to purchase this 5,000-square-foot home on 5.2 acres in Storrs for the new president.

In other action Wednesday, the trustees voted to spend $740,000 to purchase a home at 88 Gurleyville Road in Storrs as the residence for  UConn’s incoming president, Tom Katsouleas, rather than do an estimated $1 million worth of repairs needed at the current’s president’s home known as “Oak Hill.” Katsouleas will arrive at UConn in August.

Jordan explained that the Gurleyville Road house, which is located on the UConn campus but not owned by the university, has been leased by the university over the years from Philip and Christine Lodewick and used briefly as a president’s residence a decade ago and more recently as temporary housing for new hires or visiting scholars or actors.

Under the leasing agreement with the Lodewicks, the university has been paying local property taxes at a cost of $18,000 and is responsible for routine maintenance and upkeep.

“We have come to terms at $740,000 so we think that is a good deal,” Jordan said. “It’s a simple real estate transaction that just makes sense.”

He said the Oak Hill residence, which Herbst has lived in for eight years, has had no substantial renovation during that period and needs a new roof, a new HVAC system and other improvements.

“It’s our recommendation that the university pause on Oak Hill, evaluate our options and renovate as we can,” Jordan said.

He said that eventually Oak Hill might be used for another purpose but that the Gurleyville Road home would be the president’s residence “going forward.”