Karen Delgado was spending much of her life shepherding her son, who has autism, to multiple doctors and therapy appointments when she spotted a notice on Facebook about a free program to help women start their own businesses.

Delgado, who moved to Connecticut from Puerto Rico three years ago and lives in the North End of Hartford, decided to enroll in the program — offered at the fledgling Women’s Empowerment Center at the Community Renewal Team offices in Hartford — because she thought that running her own business might be the way to earn an income while managing her family responsibilities.

The program gave her the confidence to open her own baking and party decorating business, called Magykal Moments. 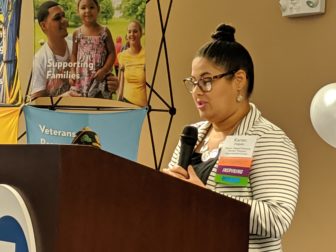 Karen Delgado attended a program at the Women’s Empowerment Center to help her start her own business.

“It was only an idea in my head, but I saw I could do it,” she said. “I can be my own boss and manage my own schedule.”

The empowerment center, which opened in May, on Thursday hosted a formal opening at which CRT President Lena Rodriguez explained her vision for center. The event was attended by elected officials, including Lt. Gov. Susan Bysiewicz and State Treasurer Shawn Wooden, community leaders and clients.

“People think that women know somebody or have family who can support them, but there are a lot of women who don’t and they feel isolated,” Rodriguez said. “So this is a safe environment that women can come to.”

Of the clientele served by the non-profit community action agency in  Hartford and Middlesex counties, Rodriguez said, said nearly 60 percent are women and and nearly 31 percent are single parent, female-led households. 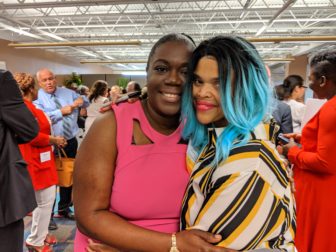 Tenesha Grant, left, director of the CRT’s new Women’s Empowerment Center, with Unita Jones, right, who attended a program at the center to help her start her own business.

Rodriguez said the center will help direct women to any services they need — whether housing, employment, child care, mental health or others — while also providing a comfortable setting for conversations, a book club, movie nights and other activities. The center can also serve as  a venue for special programs such as the Small Business Association’s training program that was attended by Delgado.  Finally, the center is  working to attract volunteer mentors who can provide assistance to women in various ways.

Rodriguez said that about $80,000 has been raised for the center over the last two-and-a-half years and the hope is to raise more money, including purchasing couches and other comfortable furniture. The center has three computers that members can use.

Tenesha Grant, the director of the center, said she was the mother of two small children before she even graduated from high school.

“I’ve walked in the shoes of many of the women that we serve here in our center,” Grant said. “We have women from all different walks of life here. Some need a lot of support and others a point in the right direction. CRT wants to ensure that the women we serve have every opportunity to control their own futures, and that they have the skills, resources and support they need to thrive both personally and professionally.”