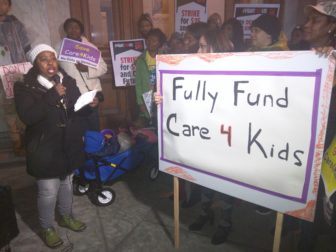 Freelove Queen of New Haven during a 2016 rally at the state Capitol about cuts to the state’s child care subsidy program.

The state’s child care subsidy program, Care 4 Kids, has received a long-awaited boost that will raise the reimbursement rates for children served under the program for the first time in 17 years.

The boost: $14 million in new federal child care development funds, which will be dispersed to an estimated 1,200 centers with families who rely on Care 4 Kids certificates for their child care needs.

In Hartford, this translates into a 50 percent increase in rates for infant or toddler care, which means parents who previously received $201 a week in assistance will now receive $308 a week. The preschool reimbursement rate will increase from $175 a week to $300 a week.

Similar rate conversions are estimated for the southwestern part of the state.

“What is really significant about this increase is the fact that it will now provide access to parents who up until now received a voucher that is worth $100 less than the cost of childcare,” Gay said.

Currently, Connecticut’s child care subsidy rates are among the lowest in the country and there is a 50,000-seat shortage for infant and toddler care, according to state officials who hope the increase in rates will eliminate the need to triage by expanding childcare options for parents while improving the quality of care.

“We’re making about $25,000 available to our parents and the average weekly assistance we are giving our parents is between $26 and $35,” Goldburn said. “With the Care 4 Kids program, we have informed parents that we are going to be pulling that assistance because the increase in the Care 4 Kids rates will once and for all help parents afford care at Hope Child Development Center.”

About 18,000 children currently participate in the state’s Care 4 Kids program. To qualify, their parents must be working and making less than 50 percent of the state median income, which is about $56,250 for a family of four.

Goldburn said the scholarship funds will now go to help the 30 percent of parents whose earnings are in the 51st percentile of the state median income, meaning they are ineligible for Care 4 Kids.

“Hope New Haven can now be a source of support for those families, and so this increase goes well beyond just the families that receive Care 4 Kids,” Goldburn said.

Legislation that would have raised the income qualification for Care 4 Kids to less than 75 percent of the state median income eluded advocates this session and never made it to a final vote. However, Bye said that another measure addressing income qualifications will ease anxiety for parents who entered the program meeting the requirements but then were deemed ineligible after receiving a raise.

The rate increases will go into effect this September, and Bye said the long-overdue funding will help stabilize the state’s already delicate child care system while also creating gains for child care workers who have long held out for wage increases.

“This funding is so important because people don’t understand how little these [providers] make,” Abercrombie said. “The people who are making $10 an hour are the first ones that they’re going to boost up.”

According to Gay, Rep. Rosa DeLauro, D-New Haven, lobbied for a substantial increase in federal payments to the states for childcare. In 2018, a federal budget compromise resulted in another $2.4 billion for the child care development block grant, which later funded the $14 million Connecticut needed for the rate increase.

Correction: July 22, 2019
An earlier version of this story misrepresented the role of federal lawmakers in obtaining federal funds for childcare. The story has been amended to correctly reflect the lawmakers’ roles.