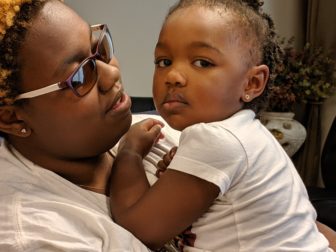 Paisley Galindez was only two but she could handily disrupt a pre-school class, her mom Vatrece Williams-Galindez recalls.

“She was screaming, yelling, biting, hitting, scratching, throwing toys, breaking things,” Williams-Galindez said recently. “She had her moments where she would be very aggressive toward the children. We couldn’t figure out what was setting her off.”

It’s the kind of behavior that can lead to the suspension or even expulsion  of a very small child — a troubling phenomenon that continues despite a 2015 state law that has helped to reduce suspensions of Connecticut’s youngest children, but has far from eliminated them. That law set strict parameters on the use of suspensions for young children.

There were 1,943 incidents of young children — pre-school through grade two — suspended in Connecticut in 2017-18, according to state figures. That’s down from 5,000 incidents in 2014-15, but still significant.

At King’s Chapel Early Care and Education Center in Hartford, Paisley Galindez’s teacher, Shirley Leslie, said they would never have suspended the little girl, but they did call in the help of a state-funded program that provides consultation to teachers and families at public and private pre-schools when a child’s behavior has become disruptive.

The Early Childhood Consultation Partnership provided assistance to 438 children, their parents, and teachers in the past year. A month after the intervention was completed, 98 percent of those children had not been suspended or expelled.

“This is a tremendous example of identifying a problem and putting in some real help and assistance,” said Vannessa Dorantes, commissioner of the state Department of Children and Families, which provides $2.2 million for the program annually, while the Office of Early Childhood chips in $750,000.  “It’s not only for the families and the children, but also for the staff who also want to do a good job.” 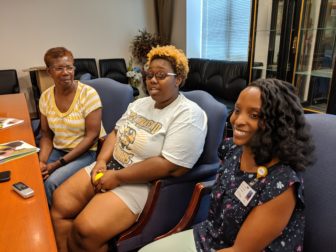 When Vatrece Williams-Galindez’s daughter, Paisley, was acting up in pre-school, Angelica Thompson, right came in to help through the Early Childhood Consultation Partnership program. Thompson worked with Williams-Galindez and with the child’s teacher, Shirley Leslie, at left, along with others.

Beth Bye, commissioner of the Office of Early Childhood, said that when she was program director of an early childhood center, the partnership program “was a lifesaver.”

“We had kids with really significant behavioral challenges in the past and I found generally that we could manage this, but there were just children showing up who were much more challenging and needed outside help,” Bye said.  “There were a couple of kids who without ECCP would never have made it and would never have been able to remain in the classroom.”

Dorantes said the program also saves parents from losing their jobs if their child is suspended or expelled. Losing childcare can “turn into other issues that result in families becoming involved with our system,” Dorantes said.”This really has that strong front-end approach of trying to address issues before they snowball into anything much bigger.”

For Paisley and her mother, the program turned out to be very helpful, bringing in Angelica Thompson as a consultant through the Village for Families and Children.

“She helped us get to the bottom of some of the things that were influencing Paisley’s behavior,” Williams-Galindez said.

Thompson said she tries to assess all the factors that are affecting a child at home and at school. “I always call myself the detective in terms of putting together the pieces of the puzzle,” she said. If needed, she links families and children to health care or social services.

Thompson’s approach includes home and school visits, observation time, and conversations with parents and teachers. She also coaches parents on what questions to ask if she believes the child needs to be seen by a doctor. 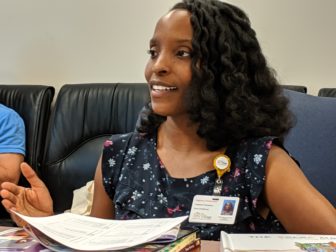 Angelica Thompson, a consultant with The Village for Families and Children, steps in helps pre-school children with troubling behaviors. She recently left the Village for another job.

“I’m a big fan of we need to rule things out,” Thompson said.

For example, Thompson learned that there had been a few significant changes in Paisley’s life — her family had moved and there was a new baby in the picture – which were challenging for a child who had difficulty with transitions.

A visit to the pediatrician also helped clear up some of the other factors influencing the little girl’s behavior, such as an allergy medication that can cause children to be depressed and emotional and minor hearing loss from frequent ear infections.

“So at certain volumes, she couldn’t hear,” said Williams-Galindez. “It wasn’t that she was being defiant.”

She’s now scheduled for surgery in August to have her adenoids out.

“We were able to catch her before she acted out,” said Williams-Galindez.

Thompson also helped Williams-Galindez establish stronger routines at home so that Paisley would know which parents would be handling the bedtime routine, and put together a bag of sensory items, like play dough and drawing materials, her daughter can use if she becomes distressed or angry.

Paisley’s teacher and mother have both seen big changes in her.

“Every once in a while in a blue moon she has her moments,” Williams-Galindez said. “But it’s been way better. The incident report has completely stopped because she’s not harming other children.”