The organization is enlisting politicians' help amid battle over federal funding 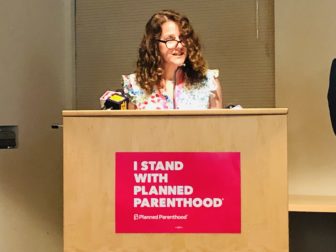 Amanda Skinner, the head of Planned Parenthood of Southern New England, said facilities will continue to operate as usual, despite the loss of federal funds.

The head of Planned Parenthood in Southern New England said employees across the region’s 17 clinics are undaunted by threats to the nonprofit’s federal funding, and she pledged not to let attacks from government leaders interfere with the group’s mission.

Amanda Skinner’s remarks on Tuesday came days after the Trump administration began enforcing new regulations that prohibit Title X grant recipients from counseling patients about abortion. Under the new rules, providers are still able to perform abortions, but must do so in separate clinics and abide by the requirement that they not refer patients to those facilities.

Planned Parenthood of Southern New England, which includes 16 clinics in Connecticut and one in Rhode Island, responded by saying it would reject the federal family planning funds and tap an emergency reserve to get by through the end of the year. Attorney General William Tong is part of a multi-state coalition suing to reverse the regulation, known as the “gag rule” by critics. Planned Parenthood and the American Medical Association are also challenging the regulations.

By rejecting the Title X funds, Planned Parenthood of Southern New England will lose out on $2.1 million annually – about 5.5 percent of its budget. The group has enough in an emergency reserve to cover the shortfall this year, officials have said, but will look to fundraise in the future if the new regulations are not overturned.

Tong, who joined Skinner on Tuesday, said he is hearing an “unprecedented” amount of alarm from residents over the future of the services Planned Parenthood provides. So far, there’s been plenty of pushback, Tong said, but he worries activists will grow weary from the prolonged battle.

“What I am most concerned about is fatigue, people getting tired by this fight,” he said. “I worry about the onset of exhaustion from this president and his war on American women, and the exhaustion from a fight that’s been going on for a long time now, but in a really intense way in recent months and years.”

The Title X overhaul had been on hold since it was finalized in February. Several federal judges blocked it from taking effect, but a three-judge panel in the 9th Circuit Court of Appeals last month allowed the regulations to proceed. The appeals court, which will re-hear the case, denied a request from Democratic states to pause the new rules while the legal battle is underway. Trump’s administration said last week it would move ahead with enforcement, prompting pro-choice groups in several states to reject the funding.

The Supreme Court could have final say over the case.

In Connecticut, about 43,000 Planned Parenthood patients rely on the money for access to services such as cancer screenings, testing and treatment for sexually transmitted diseases, and birth control. 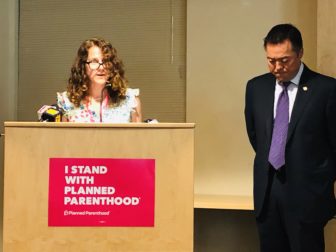 Skinner was joined by Attorney General William Tong, right, who along with several other states is suing to reverse the new regulations.

Erin Livensparger, director of clinical training for Planned Parenthood of Southern New England, asked that Tong and other state leaders visit the group’s clinics, issue more statements of support, provide updates on the court case and help explain the technical aspects of the litigation to employees.

“More of this,” she said, when Tong asked what else he could do. “Say that you’re in it with us every day.”

Damon Gibbs, a staff training specialist at Planned Parenthood, said top officials should make themselves more accessible to people of color, who are often left out of the conversation.

The Title X change has strong implications – 61 percent of patients who qualify for the funding are people of color. Twenty-nine percent are African American and 32 percent are Latino.

“Having the opportunity to be recognized by the people who are representing them is just a really critical part of lifting them back up and supporting them,” she said.

The Title X funds go to more than 4,000 clinics across the country.

“This rule will … needlessly compromise health care for the millions of people who rely on the critical services provided by those centers,” the senators wrote. “In light of this dangerous impact and the many concerns raised by health care providers, patients and other stakeholders throughout the development of this rule, we believe the rule should be rescinded.”