Jasia Flowers had shackles around her wrists and ankles the first time she heard her unborn child’s heartbeat. Only 15, and a recent high school drop-out who had been arrested for missing a court date, Flowers had been in and out of the state’s foster care system her whole life.

“At the point I had my daughter, I was a complete juvenile delinquent,” Flowers recalled.

Now 26, Flowers is a manager at the Hartford Courant’s newspaper warehouse. Standing beside her daughter, Flowers issued a warning to the policymakers and researchers gathered at the Legislative Office Building on Tuesday afternoon for the unveiling of data that shows more Connecticut children are living in poverty than 30 years ago.

Despite improvements in teen birth rates and child health insurance rates, more Connecticut children are living in single parent families and households that pay more than 30 percent of their income for housing, according to the 2019 Kids Count Data Book, an annual report on children’s wellbeing throughout the country.

“We have to be aware of the struggles of children in poverty,” Flowers said, “and the pathology that certain types of trauma might have on generations of families.” 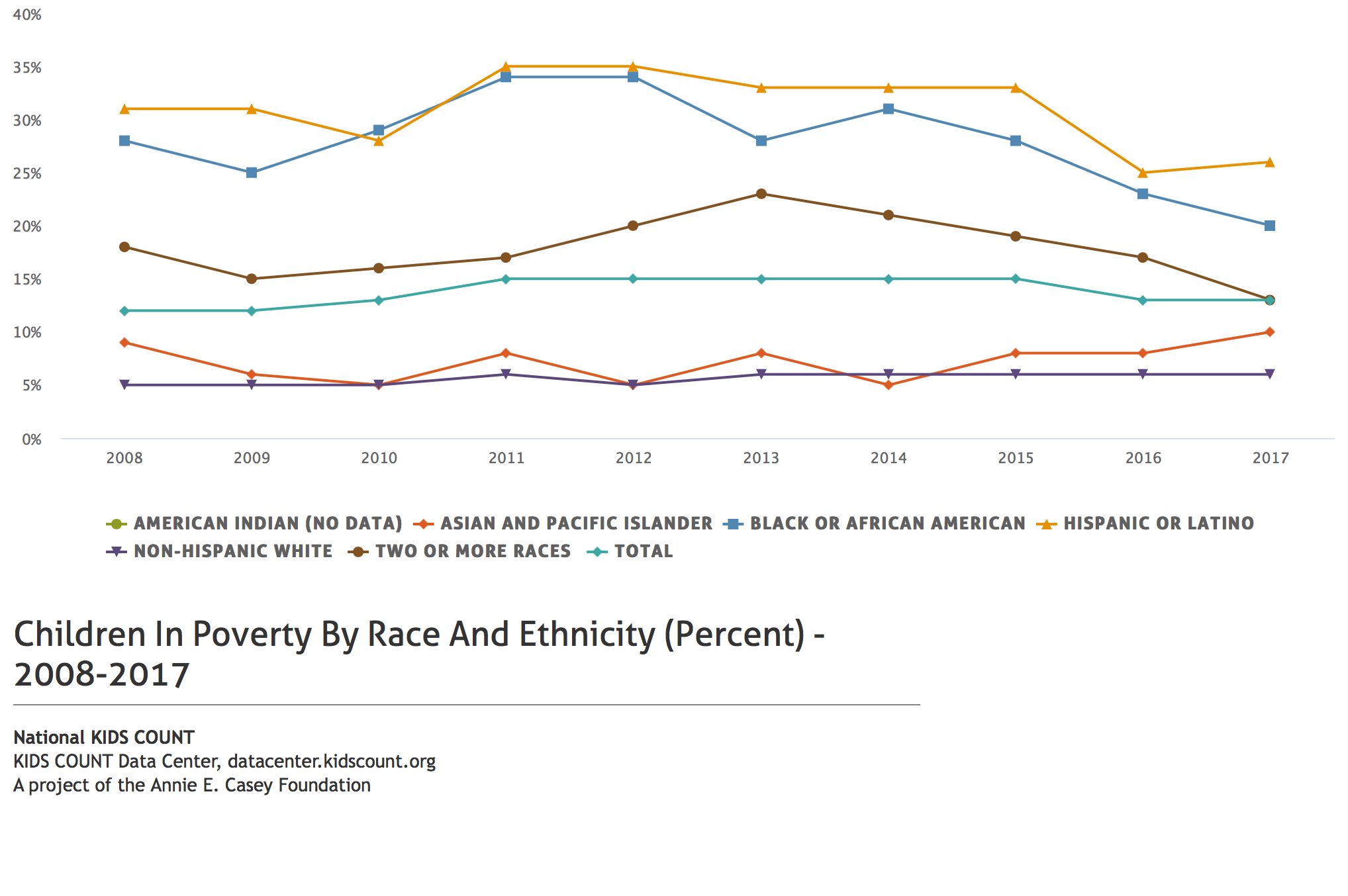 The trend graphic above shows Connecticut child poverty data from 2008-2017.

The study, conducted by the Annie E. Casey Foundation, scores states on four indicators: family and community, health, education and economic well-being, the category in which Connecticut scored most poorly.

“We have fallen precipitously in this way, from being in the top tier 30 years ago, to being in the second lowest tier,” said Sheryl Horowitz, chief research and evaluation officer for the Connecticut Association for Human Services, which presented the date Tuesday. “More children are living in poverty, more families have no parent with secure employment and many families have high housing costs burdens.”

The state’s high ranking— number eight overall — masks significant racial and ethnic disparities, advocates said. Poverty rates of white children stayed relatively stable, between 4 and 6 percent, between 2005 and 2017, while those for black and Latino children fluctuated between 20 and 34 percent. The data also shows that one in five black children, and one in five Latino youth, live in concentrated poverty, compared to one in 100 white children.

“When adults cannot provide stable economic conditions for their families, it certainly impacts multiple indicators across the continuum, including the health, safety and well-being of our kids, whose future success is at stake,” said Rep. Robin Comey, D-Branford. 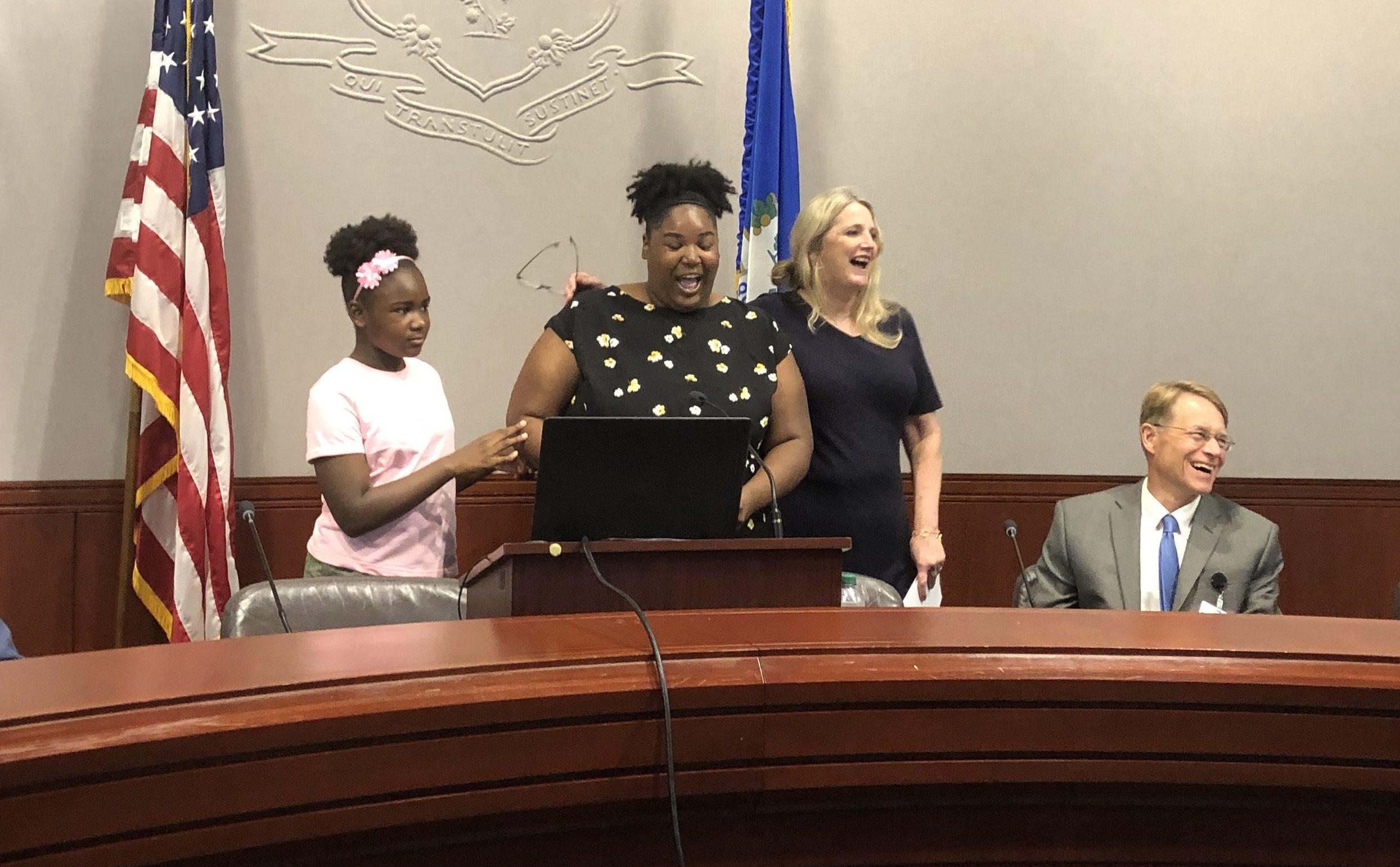 Flowers, who was raised by a mother who herself was a ward of the state, moved to Middletown after having her daughter. What saved her, she said, was her own love of learning.

“I was smoking, I was drinking, but all the while I still kept reading because that was my obsession,” said Flowers. “I loved books, and I collected them.”

Flowers earned a GED in October 2010. She and her child took classes at the same time, thanks to the Middletown Even Start Family Literacy Program, which Flowers said, “changed my life. They removed my barriers and provided help to me because I wanted to succeed.”

Rep. Doug McCrory, D-Hartford, who is co-chairman of the legislature’s education committee, said lawmakers must do more to ensure Connecticut residents have equal opportunity to succeed.

“Talent is universal, but opportunity isn’t,” said McCrory, after seeing the presentation and listening to Flowers’ story. “I know what I’m going to do for the next two or three months. We have to have a conversation around untreated trauma in our communities, and access to the supports.”

There is a litany of research that shows poverty is bad for children, said Merrill Gay, the executive director of CT Early Childhood Alliance.

“We’ve seen 30 years of data here in Connecticut that shows that we really have not made a difference in child poverty,” Gay said. “And one of the reasons might be the fact that 1% of white children live in communities where there’s concentrated poverty. As a state that’s largely been run by white people, it’s been easy to overlook the problem.”

While the aggregate data makes Connecticut look like it’s one of the best places in the country to raise children, Gay added, upon closer inspection it’s clear that racial and ethnic disparities exist.

“We now need to get serious about closing those disparities,” Gay said, calling for legislators to expand childcare options for low-income parents going to school. “We need to now use the data and work together to come up with some solutions.”

Meanwhile, a 21-year-old who spent 35 days at St. Vincent's Medical Center in Bridgeport has recovered and returned home.

Relatives and advocates say support for disabled patients in hospitals shouldn't count as 'visitors' when they serve a vital role.

The incubation period of the coronavirus is a week or two.